America vs. China: A Proxy War through Taiwan? 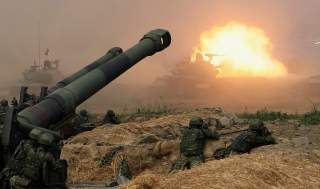 In the same week in mid-September, two Pacific nations—the Solomon Islands and Kiribati—severed diplomatic ties with Taiwan, leaving the number of countries recognizing Taiwan to only fifteen.

This is a historical low that the world hasn’t seen since 1949.

Worse, this domino effect may have just begun. If President Tsai Ing-wen were to win another term in January’s election, then it may become increasingly expensive for Taiwan to retain its remaining allies. Following Ing-wen’s May 2016 inauguration, Taiwan has lost seven allies and retreated from two international organizations.

Three nations in Central America have parted ways with Taiwan: Panama, the Dominican Republic, and El Salvador. Two additional nations were lost in Africa: Sao Tome and Principe and Burkina Faso. This month, two more South Pacific nations parted ways with Taiwan. The increasingly isolated country also did not receive invitations from the World Health Assembly or the International Civil Aviation Organization for the past three years.

This pattern shows that Beijing has flexed its muscles in the global arena to squeeze Taiwan’s international space.

A New Model of Proxy War

While Taiwan has seen many allies turn away, the Solomon Islands case is unprecedented in terms of its procedure. It was not some individual leadership’s flash decision, but a collective resolution of the cabinet after a long process of assessment lasting for three months—a period long enough for foreign intervention.

The U.S. ambassador to the Solomon Islands, Catherine Ebert-Gray, met with its prime minister, Manasseh Sogavare, and urged him not to abandon Taiwan before the severance. Vice President Mike Pence was also scheduled to meet with Sogavare the following week in New York during the United Nations Assembly for the same reason. Furthermore, earlier in March, both Washington and Taipei sent senior officials to the Solomon Islands to engage in talks to strengthen cooperation in the Indo-Pacific region. Also, this past June, Australia pledged a $250 million aid program for infrastructure in the Solomon Islands, hoping to balance China’s growing influence in the region.

These failed efforts by the United States and Australia paired with the decision by the Solomon Islands signal a change of power dynamics in the region and potentially a new model of proxy war emerging between the United States and China. The remaining fifteen allies of Taiwan are now becoming proxies that would indicate the change of American influence in each specific region.

For Taiwan, this new and emerging proxy war is both good and bad. In a way, Taiwan may benefit from this new model; it could be a free-rider relying on Washington to secure its diplomatic relations. In another way, Taiwan may be the victim of this proxy war for it is likely to lose allies depending on the power competition between the United States and China.

Following the Solomon Islands and Kiribati, observers are wondering which country will be next. Would it be Nicaragua or Honduras in Central America? Haiti in the Caribbean Sea? Or Tuvalu in the South Pacific? These nations may all soon become Beijing’s target, and the leaders of these nations could be ready to send secret envoys to Beijing to negotiate a good deal.

If Taiwan’s allies switching their ties to China are not in Washington’s favor, then America needs to intensify its intervention efforts to thwart the next potential incident. A byproduct of this strategy would mean the status of Taiwan’s international space would change. It would slowly integrate into Washington’s global agenda, which may further spark conflicts with Beijing. Thus, Washington needs to carefully consider whether it really intends to engage in this proxy war, and also estimate the likelihood of this proxy war to become a full-blown war when one day China exhausts all its patience on the Taiwan issue.

On the contrary, if Washington decides to tolerate China’s expanding influence on Taiwan’s last remaining allies, then it could wait to see what happens when the domino effect continues. Without a strong support from Washington, Taiwan may lose all its allies if the island continues to isolate itself from the mainland.

Observers may agree that neither of the two immoderate approaches are in the best interest for either the United States or Taiwan. Instead, the best way for Washington to de-escalate this proxy war is to help distance Taiwan from the power conflicts between the United States and China. Taiwan should be encouraged to find its own way to establish a constructive relationship with the mainland so that Washington may ease itself of this policy dilemma.

For Taiwan, while it continues to be stuck in a much larger global context, it can wiggle a way out for itself with more moderate and neutral policies towards both China and the United States. Under that scenario, Taiwan may find a way to keep its existing allies as well as prevent itself from being a flashpoint of large-scale global conflict.

Charles I-hsin Chen is the executive director at the Institute for Taiwan-America Studies in Washington, DC. He was the spokesman to President Ma Ying-jeou in Taiwan. Ingrid Tang is a graduate from Columbia University School of International and Public Affairs.