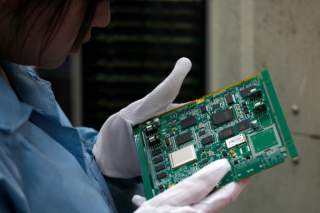 The United States Commerce Department has granted Chinese telecom company, ZTE, a reprieve from a seven-year ban on using U.S.-made parts—a bad that was effectively a corporate death sentence.

However, ZTE remains on probation and has to do a few things. These include; paying a $1 billion fine and placing $400 million in escrow—money forfeited in the event of future misbehavior; replacing ZTE’s board and management within thirty days; and installing a U.S.-selected compliance team for ten years.

This is going to hurt ZTE—and China’s Communist Party (CCP). However, it’s the sort of pain one feels when trying not to laugh aloud in public.

The American government has named its price on ZTE. This price was for ZTE's gross violations of U.S. law and sanctions, for bribing its way into contracts around the world, and for spying.

But China can pay these prices.

$400 million in escrow? Not even peanuts, more like the ‘dust’ left in the empty peanut jar.

As for the American compliance team? It’s hard to imagine that a handful of Americans—maybe a couple of whom speak Mandarin—are going to ride herd on a Chinese company with 75,000 employees and global operations.

For the Chinese, all of these punishments will be a bearable inconvenience. And with the compliance team inside the company—they’ll be easy to monitor.

But won’t the compliance team report directly to ZTE’s new chairman, as U.S. Commerce Secretary Ross noted? Yes, but presumably it’s the chairman tacitly approved by the Chinese Community Party, and who therefore knows not to say ‘no.’

Now, China may of course order ZTE to cooperate fully. And while the Trump Administration is pleased with having taught the Chinese a lesson—and put the fear of God in them—it's business as usual for the Chinese government and every other Chinese company on the planet.

In fact, turning ZTE into a “clean” company may be too tall an order—even for the Chinese Communist Party. However, based on first-hand experience in this field, here’s what is required:

First, a new CEO or President of ZTE who takes the matter seriously. This could be because a future leader of ZTE is afraid of getting in trouble with the United States, but it would be even better if the company's new leader saw the matter as a competitive advantage. As one unusual company president put it: "People see what kind of company we are (an honest one) and we get more business as a result."

This new CEO also needs to be scary enough that his writ runs throughout the company—this includes keeping an eye on independent-minded executives who’ll otherwise do anything to make money. Anything.

Next, ZTE needs enough honest, competent ‘monitors’ (call them what you will) that report directly to the CEO and are fully worked into the business process, so every single deal is vetted and understood. Additionally, they need the authority to reject transactions—not just recommend against them.

If this is done, eventually the company’s rank-and-file will come around—or else leave (usually for competitors who are less inclined to ethical behavior).

Now, this is all hard to do even at a Western company—where the rules are understood—even if flouted. Consider HSBC, Standard Chartered, VW, Siemens, and many other companies who have gotten in trouble.

So how do you accomplish this at a company ultimately beholden to the Chinese government? That is a tough question that is hard to find an answer to. A fundamental problem with ZTE—and Chinese companies in general—is that prohibited behaviors in the West are more often than not the preferred practices in China. These include bribery, theft of proprietary information and sanctions evasion. And why not? They reason it's a way to make money after all.

Some years back an American company in China discovered a local company in a distant part of the country using its advertisement with only the company name changed. When confronted, the Chinese company president’s straight-faced reply was “I did it because it worked.”

As for the U.S. government’s spying concerns with ZTE products, one imagines the espionage will be better hidden or moved to another ‘platform’ company instead of terminated.

As one American businessman with several decades in China aptly noted: “My experience has been one does not gain any favor with the CCP by performing “good deeds” to influence the CCP’s opinion of us.”

More likely, Mr. Trump considers the ZTE probation as something of a club to be wielded at convenience to force Chinese acquiescence on a range of other issues.

This may succeed. But better to have ‘killed’ ZTE, noted that there are other companies on the U.S. list, and then said to China: “Now let’s talk.”

All of this displays a curious lack of cold-bloodedness on the Trump Administration's part—a cold-bloodedness that one needs when dealing with the Chinese regime. The CCP seldom, if ever, shows similar restraint, and then only tactically as it goes for the jugular.

The Trump Administration has been better than its predecessors when it comes to Asia. However, the chance to reign in ZTE has been misplayed, and such opportunities come along infrequently. Indeed, it's akin to a boxing match where one boxer lands a staggering blow on his opponent's chin, but instead of following up with another punch, he backs off, lets the other guy catch his breath—and then helps him to his corner—and sponges off his head.

Maybe Mr. Trump has a plan for ZTE. But maybe not.

Grant Newsham is a Senior Research Fellow with the Japan Forum for Strategic Studies in Tokyo.