America Will Be Hurt Thanks to the Trump Impeachment Showdown 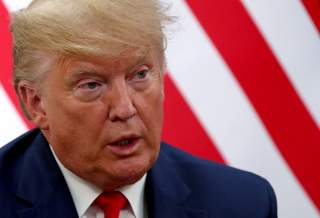 House Democrats won the first round. They impeached Donald Trump, a man they despise and whose presidency they wish to destroy. It was, of course, a strictly partisan vote. Senate Republicans will win the second round. Trump will be acquitted by the Senate in what will be largely or entirely a partisan vote. So we will have two winners--House Democrats, who control their chamber and who have stamped Trump as an impeached president for all time; and Senate Republicans, who control their chamber and can thwart the destroy-Trump effort with just a third of Senate votes plus one.

Trump will win and lose at the same time--escaping conviction but tarred in history by the House impeachment vote.

But the central loser in this drama is the country. The impeachment saga is giving the country precisely what it does not need in these difficult times of impassioned politics--namely, a huge dose of political cynicism. One has to wonder what these politicians are thinking as they wrap their actions in grave pronouncements about their reverence for the hallowed Constitution even as they engage is some of the most grubby political actions seen in many years.

What are we to make of Jerry Nadler, House Judiciary chair, who said during the Clinton impeachment twenty years ago that presidential impeachment initiatives shouldn’t be undertaken on a partisan basis. “There must never be,” he declared back then, “a narrowly voted impeachment substantially supported by one of our major parties and largely opposed by the other.” Such an impeachment, he added, would lack “legitimacy” and would produce “divisiveness and bitterness in our politics for years to come.”

And yet here he is, pushing a narrowly voted impeachment that by his own standard of yesterday lacks legitimacy and will inevitably do damage to the body politic.

And what are we to make of Senate Democratic leader Chuck Schumer, who pummels his opposite number, majority leader Mitch McConnell, with the incendiary epithet of “cover-up” over a dispute on Senate trial procedures. Schumer has a case to make on whether the Senate should call witnesses desired by the Democratic prosecution, but the term cover-up is designed to strip from McConnell any presumption of good faith in his efforts to navigate the difficult waters of Senate trial procedures.

And what are we to make of House Speaker Nancy Pelosi, who emphasizes for weeks how somber this whole thing is, how difficult and fraught with sadness, how she prays for the president. And then, when signing the House impeachment resolutions, she hands out commemorative pens to her cronies and fosters a television spectacle of celebration, replete with giggles and handshakes.

There may be a serious impeachment case to be made against President Trump, but the two impeachment resolutions passed by the House and signed by Pelosi don’t constitute such a case. They lack specificity; the alleged harm from the president’s actions is wispy; his evil intent is not proved; and the “abuse of Congress” resolution seeks to wrest from the president (any president) his constitutional responsibility to protect presidential prerogative, through judicial review if necessary.

And so the American people must confront the spectacle of polemical contortions, rhetorical hypocrisy, and abject disingenuousness. It isn’t going to endear them to the political class, already in pretty bad odor throughout the land. And of course, if we’re looking for polemical contortions and disingenuousness, it can be found on the part of Republicans as well.  Many a pol on that side of the aisle fails the consistency test when pro-impeachment pronouncements from the Clinton episode are compared with anti-impeachment pronouncements today. It is a reality of human nature that impeachment politics brings out the worst in politicians everywhere.

But it was the Democrats who initiated this partisan impeachment and who must take responsibility for its consequences. And when the dust settles, it will remain true, as it was beforehand, that the only justifiable impeachment initiative in our history was the one lodged against Richard Nixon in the 1970s.

The Andrew Johnson impeachment was a travesty. Congress’s Radical Republicans, with a veto-proof majority in both houses, essentially took control of the executive branch of government through an assault on the Constitution’s separation of powers. As part of their attack on presidential prerogative, congressional republicans passed an unconstitutional law--the Tenure of Office Act--transferring to Congress control over the president’s ability to dismiss executive branch employees. When Johnson fired War Secretary Edwin Stanton, the braying wolves of impeachment rushed to their prey. Johnson was impeached by the House and acquitted in the Senate by just one vote.

The deciding vote in Johnson’s favor was cast by Kansas Republican Edmund Ross, who suffered defeat at the next election and ostracism from officials of his own party up and down the line. Ross is featured in John F. Kennedy’s famous book, Profiles in Courage, which is summarized on the U.S. Senate website. The summary says Ross believed that “if a president could be forced out of office by insufficient evidence that was based on partisan disagreement, the presidency would then be under the control of whatever congressional faction held sway.” Ross, says the summary, was vindicated when the U.S. Supreme Court declared the Tenure of Office Act to be unconstitutional.

The Bill Clinton impeachment is a particularly interesting case in that it focuses on what should be the threshold for removing a president who was duly elected by the people. There was no question that Clinton violated the law when he perjured himself in testimony before a grand jury. Less clear, but serious, was an impeachment allegation that he committed obstruction of justice. The House impeached him on both counts, with five Republicans voting against impeachment on the perjury resolution and five Democrats voting to impeach. On the obstruction charge, five Democrats voted to impeach while 12 Republicans voted against.

In the Senate, Republicans failed to come even close to the two-thirds vote needed for conviction. They got just 45 votes on the perjury charge (with 10 Republicans voting against conviction) and 50 votes on obstruction of justice (with five Republican defectors). No Democrat voted to convict on either count.

This turned out to be a Republican fiasco. The GOP suffered substantially at the next election, suggesting the American people didn’t buy into the zealotry with which the opposition party went after the president on transgressions that, while acknowledged, didn’t seem to rise to the magnitude of a presidential removal.

The lesson is clear, and it’s the Jerry Nadler lesson: If the president’s popular standing, based on an impeachment initiative and the allegations it surfaces, doesn’t erode across the board, with members of the president’s own party peeling off in significant numbers, then impeachment is probably a fool’s mission.

Which brings us to Nixon, whose political standing in the country was already evaporating ominously even before the August 1974 release of the “smoking gun” tape that revealed the president’s early involvement in efforts to cover up details of the June 1972 Watergate burglary. After that release, his support collapsed entirely. It fell to three old GOP colleagues and friends of Nixon--Barry Goldwater, Hugh Scott, and John Rhodes--to tell the president face to face that he didn’t have a prayer of political survival. His only options were the humiliation of resignation or the greater humiliation of Senate conviction.

Only in the Nixon case do we see an impeachment that met the test of politics and history. The other three, including the current one, don’t measure up to the seriousness and solemnity required by a political action of such gravity.

What is the Path to Impeachment?