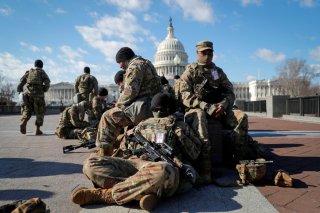 The American scorecard for foreign policy achievements over the past twenty years is, frankly, pretty dismal. And without talking our way all around the globe, it’s clear that the most dismal score goes to the stupidest mistakes. We fought one war that we never should have fought and another war whose objectives grew so out of control that no amount of battlefield proficiency could overcome the naïve mission creep of the political and military leadership at the top that was defining what our troops were supposed to do. So, let me start with a couple of quotes from two pieces I wrote, one at the beginning of this twenty-year period and the other at the end.

On September 4, 2002, five months before the Bush administration ordered the invasion of Iraq, I wrote the following as part of a larger editorial for the Washington Post, warning that an invasion would be a strategic blunder:

Nations such as China can only view the prospect of an American military consumed for the next generation by the turmoil of the Middle East as a glorious windfall. Indeed, if one gives the Chinese credit for having a long-term strategy — and those who love to quote Sun Tzu might consider his nationality — it lends credence to their insistent cultivation of the Muslim world. An “American war” with the Muslims, occupying the very seat of their civilization, would allow the Chinese to isolate the United States diplomatically as they furthered their own ambitions in South and Southeast Asia.

Almost exactly nineteen years later as the military planners serving the Biden Administration executed a shamefully incompetent final withdrawal from Afghanistan, I wrote the following for The National Interest, excerpted in the Wall Street Journal, in a piece entitled “Requiem for an Avoidable Disaster:”

…the war that we began was not the same war that we are finally bringing to an end. When we went into Afghanistan in 2001 our national concern was to eliminate terrorist entities who desired to attack us. The common understanding at the time was that we would operate with maneuver elements capable of attacking and neutralizing terrorist entities. It was never to occupy territory with permanent bases or to attempt to change the societal and governmental structure of the Afghan people. This “mission creep” began after a few years of successful operations and was obvious in 2004 when I was in the country as an embed journalist. The change in mission eventually increased our troop presence tenfold and sent our forces on an impossible political journey that no amount of military success could overcome.

Why did all this happen? And how can we rectify the damage that has been done to the institutions that were involved, and to our international credibility?

There’s an old saying that “success has a thousand fathers but failure is an orphan.” In this case, there were two entirely different categories of orphans, some of whom were not touched personally or even professionally, and some who gave up lives, limbs, and emotional health.

For the policymakers in Washington, these were wars to be remotely managed inside the guide rails of theoretical national strategy and uncontrolled financial planning. As with so many other drawn-out military commitments with vaguely defined and often changing objectives, America’s diplomatic credibility steadily decreased while the price tag rose through the roof, into trillions of dollars and thousands of combat deaths. There is no way around the reality that these hand-selected policymakers, military and civilian alike, failed the country, even as many of them were being lionized in the media and offered lucrative post-retirement positions in the private sector. Their immediate strategic goals, vague as they were from the outset, were not accomplished. The larger necessity of meeting global challenges, and particularly China’s determined expansion, was put on the back burner as our operational and diplomatic capabilities were diverted into a constantly quarreling region with the deserved reputation of being the “Graveyard of Empires.”

In the context of history, the human cost on the battlefield as viewed by those at the top was manageably small, and carried out by an all-volunteer military. Indeed, despite the length of twenty years of war and many ferocious engagements, the overall casualty numbers were historically low. DOD reports the total number of American military deaths in Iraq and Afghanistan combined over twenty years as 7,074, of which 5,474 were killed in action. This twenty-year number was about the same as six months of American casualties during any one of the peak years of fighting in Vietnam.

Emotionally, although there was much sympathy and respect for our soldiers we were not really a nation in a fully engaged war. As the wars continued, life in America went on without disruption. A very small percentage of the country was at human or even family risk. The wars did not interfere on a national scale with the lives of those who chose not to serve. The economy was largely good. In places like my home state of Virginia it absolutely boomed with tens of billions of dollars going to Virginia-based programs in the departments of Defense and Homeland Security.

This societal disconnect gave the policymakers great latitude in the manner in which they ran the wars. It also resulted in very little congressional oversight, either in operational concepts or in much-need scrutiny of DOD and State Department management and budgets. Powerpoint presentations replaced vigorous discussion. Serious introspection by Pentagon staff members gave way to bland reports from Beltway Bandit consultants hired to provide answers to questions asked during committee hearings. An “Overseas Contingency Fund” with billions of unlabeled dollars allowed military leaders to fund programs that were never directly authorized or specifically appropriated by Congress. To be blunt, the Pentagon and the Joint commands were basically making their own rules, and to hell with everybody else.

This was not the Congress in which I had worked as a full committee counsel during the Carter Administration. Nor was it the Pentagon in which I had served as an assistant secretary of defense and Secretary of the Navy under Ronald Reagan.

At the other end of the pipeline, it was different. For those who did serve, and especially for those who served in ground combat units and in special operations, being thrown into the middle of a region where violence and bitter retribution is the norm was often a life-altering experience. Repetitive combat tours pulled them away from home, from family, and from the normal routines of their peers again and again, creating burnout from unresolved personal issues of stress and readjustment to civilian life. So-called “stop loss” programs kept many soldiers on active duty after their initial terms of service were supposed to end, a policy that brought the not-unreal slogan that stop-loss was, in reality, nothing more than a back-door version of the draft: We have you. And we are going to keep you until we no longer need you. The traditional policy of allowing troops a two-to-one ratio of “dwell time” at home between deployments was repeatedly shortened until, for the Army, the ratio was less than one-to-one, requiring soldiers to return to combat for fifteen months with only twelve months at home to recuperate, refurbish, and retrain. Those who left the military after one enlistment rather than choosing a career were largely ignored by commands that provided little post-military guidance and sent battle-weary young soldiers home without much more than a goodbye.

But along the way, as with those who have served our country in uniform in every other war, our young military did the job that they were sent to do, no matter the overall wisdom of the mission itself.

With respect to these capable and dedicated young Americans who stepped forward to serve, I feel fortunate to have been able to play a part in making sure that the public was aware of the contributions they made, and to put into place policies that recognized and properly rewarded their service. And as a writer, journalist and later a Senator I was able to use whatever pulpit was available in order to emphasize that our greatest strategic challenges were not in the places where our elites had decided to invest our people and our national treasure, and to call for the country’s leadership to cease its unfortunate obsession with a region that has never needed a permanent American ground presence as a means of mediating, much less resolving, its centuries-old conflicts. You don’t take out a hornet’s nest by sitting on top of it. We’re smarter than that, and also more capable.

In addition to working on strongly felt issues such as economic fairness and criminal justice reform, once I was elected to the Senate I took a two-pronged approach to resolving the mess that had been made in our misadventures in Iraq and Afghanistan. The first involved our larger strategic interests. I immediately gained a seat on the Senate Foreign Relations Committee, and two years later was named Chairman of the Subcommittee on East Asian and Pacific Affairs. From our immediate office, I designed a staff—and a legislative approach—that would energetically re-emphasize our commitment to relations in East Asia, and recruited good people to carry out that approach. My mission to my staff was that we were going to work to invigorate American relations in East Asia, particularly in South Korea, Japan, Vietnam, Thailand, Singapore, and the Philippines, and we were going to open up Burma to the outside world. We did more than talk about this, averaging three intense trips every year where I was able to meet with top leaders in those countries as well as almost every other country in ASEAN.