American Foreign Policy: From Clinton to Obama, a Series of Complete Failures 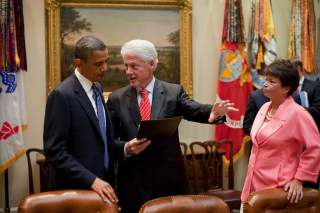 Ukraine remains in turmoil. Its lurch into chaos suggests that Washington, for all its pious noises about compromise, was never really interested in dealing with Moscow on a basis of mutual concessions. Despite the reemergence of Russia, particularly after the war with Georgia in 2008, Washington apparently does not want to accept that Russia is back as a strong and independent power intent on protecting its own national interests. And so Washington’s actions have led to the current confrontation between Russia and the West.

Unfortunately, the Ukraine imbroglio is not an isolated example. Quite the contrary.  The last American president who understood the role and place of the United States in the world and had a competent team of national security advisors was George H.W. Bush. By contrast, the Clinton administration, upon examining the future of Russia in the global architecture of international relations and security framework, chose to follow a strategic vision based on the conviction that Russia will forever be weak and dependent on the United States. This is why the administration believed that, in making decisions in world politics, it could fully ignore the Russia they perceived to be written off for good and thus lacking independent geopolitical and geostrategic interests.

Today, even a schoolboy can see that the strategic line followed by the Clinton administration was deeply mistaken. After Putin’s speech in Munich in 2007, and after the Russian-Georgian war in 2008, it became increasingly clear that Russia was not to be forever weak and dependent. Now, the Ukraine crisis has brutally exposed the problems of NATO’s role in the world and the security provision of the new members of the alliance hailing from the former USSR and Eastern Bloc. NATO has taken no efficient action outside of its traditional zone of responsibility after the end of the Cold War.

The Iraq operation was itself crowned with utter failure on the part of the U.S. and NATO. The NATO mission in Afghanistan is becoming a fiasco in its own right as NATO prepares for exit this year, to be followed by full American withdrawal in 2016. As a result of their failed operations, the Americans and NATO are leaving two countries in worse chaos than when they invaded them. The most conspicuous failure of U.S. foreign policy in the Middle East can be seen in the possible appearance, partly facilitated by American intervention itself, of a terrorist Islamic State of Iraq and the Levant. Washington is trying to counteract the terrorists by negotiating with Iran’s mullahs, whose radicalism makes Bashar Assad look like a fully respectable politician.

With regard to the Ukrainian crisis, a serious topic of conversation is the net benefit to the West (and to the new countries) of NATO’s inclusion of the Baltic States, Poland, and some Balkan countries. As it turned out, strategists who advocated the endless expansion of NATO never dreamt that it would come at a cost. They believed that the old NATO members would not face challenges. They never seriously posed the question of whether they would be ready to wage war for the Baltics or Poland.

In this regard, we need only recall the recent scandalous statement by Polish Foreign Minister Radek Sikorski, who, in a discussion with the former Finance Minister of Poland, noted that no matter how much Poland tried to bend to U.S. interests, it would only receive the illusion of security and stability in return.

Today, it is clear to all that the strategic line followed by Clinton on Russia and the former Eastern Bloc, as well as a string of strategic decisions by the Bush Jr. administration, were a total failure.

If Clinton followed some strategic policy with regard to Russia and the Post-Soviet and Post-socialist space, if George W. Bush followed a policy of unilateral global domination that spurred the wars in Afghanistan, Iraq, and all over the world, then the Obama administration is fully deprived of any and all strategic vision, which puts the world in a complicated situation. The one superpower can, via either action or inaction, create equal amounts of chaos and instability in the world.

On the one hand, the Obama administration desired improved relations with Russia, but as it turned out, the leadership in Washington could not figure out what exactly it was that it wanted. An example of that was the ill-fated stunt with the red button gifted by Hillary Clinton to Sergei Lavrov, on which they had written “overload” instead of “reset.” This was no typo or mistake, but rather an indication that the administration itself had no idea what it wanted.

This was made all the more obvious when, on the one hand, Washington was urgently withdrawing boots from Iraq and leading a staggered withdrawal from Afghanistan, while on the other hand, Obama, under the influence of hawks in Congress and his own cabinet, decided to bomb Libya, which led to the death of Colonel Kaddafi and the simultaneous immiseration of the country.

The Obama administration found itself involved in all stages of the crisis in Egypt, where again, under the influence of liberal interventionists, it partook in the ousting of Hosni Mubarak only to lead to the ascendance of the Muslim Brotherhood to power, and then sat quietly on the sidelines as the legally elected President Mursi was deposed in a military coup. Again under the influence of the hawks in Washington, the Obama administration tried to carry out strikes against Syrian President Bashar Assad without the slightest understanding of what was happening in Syria, what the nature of the civil war was, the balance of powers, as well as the potential threats, regional and global, stemming from the Islamic radicals fighting Assad, not from Assad himself.

What does the activity of successive U.S. administrations from Clinton to Obama demonstrate on the global arena?

To draw an analogy with the Phrygian king Midas, who turned all he touched into gold, everything the U.S. has touched outside of its own territory, be it in Yugoslavia, Iraq, Afghanistan, Libya, Egypt, to a significant degree in Syria, and even today in Ukraine, has turned to wasteland, chaos, and ungovernability. Intervening in all these places in the internal affairs of states, the U.S. soon departs, leaving behind numerous deaths and ruins, and no hope for the future.

In the past few years, Washington has frequently accused Russia of chasing zero sum games in its foreign policy. Maybe this would come as news to someone in Washington, but there is a consensus in Moscow among politicians and experts that the West, and the U.S. in particular, is pursuing just such a zero sum game against Russia.

As I noted earlier, it was exactly this rationale that made the foundation of Clinton’s and George W. Bush’s policies towards Russia. Obama follows the same rationale.

The crux of the issue is that, for Russia, Ukraine is an existential problem. For Washington, by contrast, it is a faraway periphery of the American empire, and in any case, U.S. public opinion is far from approving of sending Americans’ children to die for Ukraine, and categorically opposes U.S. military intervention in this conflict. Regardless, the Obama administration was not ready to accept the moderate, fully logical and realistic Russian demands on the Ukrainian authorities, which moreover coincided with the demands of roughly half the Ukrainian population. We are talking here about the calls on the authorities to enshrine the neutral status of Ukraine in the Constitution, allow a federative structure of the state to transfer more power to the regions, and constitutionally adopt Russian as a second official language. Such demands would have seemed perfectly reasonable and natural to Washington in any other part of the world, but because it perceives its relations with Russia as a zero sum game, it turned them down out of fear that agreement with Russia would make Washington seem weak and defeated in the eyes of the world. Pushing Kiev towards decisive pro-NATO and pro-EU actions, Washington in effect pushed the country into civil war. Ukraine already lost Crimea, and is de facto losing Donetsk and Lugansk. There is also the threat of losing the entire southwest of the country if the conflict continues. I am fully convinced that had there not been an armed coup in Kiev, and had there been a constructive dialogue with the West on the three demands of the Russian-oriented regions, which Russia has articulated, a whole Ukraine with Crimea in its structure would still exist today, and there would be no civil war.

We found ourselves in today’s confrontation with Washington because of the Obama administration’s inability to abandon the zero sum mentality. In addition, Washington did not take into account the fact that Moscow had had no plans to take over Crimea or split Ukraine. This is what is happening in this deeply divided country: it is not the foul games of Moscow, but the internal dynamics of the Ukrainian political process, exacerbated as a result of the rigidity of the Obama administration and its fanatical desire to “punish Russia” and “put Putin in his place”; the same Putin who has, for many years, shaken the peace in Washington and Brussels with his tireless dedication to restore Russian sovereignty and Russia’s position on the world stage.