The American People Have Biden’s Back On Afghanistan 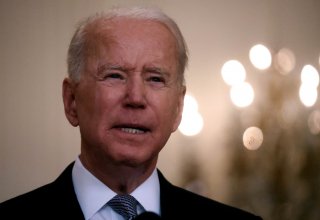 Bad news from Afghanistan following President Joe Biden’s withdrawal announcement was inevitable. We got it in spades last week with the terrible attack on a school in Kabul that killed dozens of young girls and a mosque bombing that killed another dozen people in the capital.

It is important, though, to understand that such tragic events are not new for Afghanistan—a country that has been in a state of civil war for over four decades. Sadly, civilians—including innocent school children—have been killed in large numbers before.

The tragedy for Afghans is how often they’ve been targeted by or caught in the crossfire of the various groups contending for political control there. Unfortunately, this is likely to continue for some time regardless of what the United States does. The Biden administration seems to recognize this as part of its rationale for withdrawing.

But that hasn’t stopped those in the Washington foreign policy establishment wedded to the war in Afghanistan from arguing that recent bad news should cause Biden to rethink the withdrawal. For example, a Washington Post editorial following the bombings suggested that central Asian basing discussions raise “the question of why the United States does not simply retain its relatively small footprint in Afghanistan” and argued that “the Biden administration should be prepared to step up its air support for Afghan forces to ensure that any Taliban offensive against Kabul or other major cities can be turned back.”

These steps would be tantamount to sinking deeper into a war that Americans are clearly ready to end. In recent polling conducted by YouGov, 66 percent of the general population supported Biden’s plan to bring our troops home from Afghanistan by September. Only 14 percent opposed the withdrawal. This is mirrored by those who know war the most: our veterans. 68 percent of veterans are supportive of withdrawal with only 19 percent opposed.

This follows prior polling that shows a consistently high level of support for withdrawal that stretches back to the Trump era. The American public seems convinced that we should end America’s longest war and is being realistic about what is in the realm of the achievable. Otherwise, we’d likely see significantly more people opposed to the withdrawal plan in the face of pretty severe criticism by pro-war elites who are trying to cue the American public against Biden’s plan—whether it is Senator Jeanne Shaheen (D-NH) on the Left or Senator Lindsay Graham (R-SC) on the Right. The public seems to be ignoring these voices, knowing we can’t fundamentally change things on the ground at any reasonable cost to us despite the toll that will be borne by the Afghan government and its supporters.

The Biden administration should recognize that the American people strongly support its plan to fully withdraw our troops from Afghanistan—and that other than the same old forever-war advocates who opposed both Biden and President Donald Trump, there is little constituency in favor of reversing course. Indeed, the bigger issue seems to be where else the United States should rationalize our approach to the Middle East as we focus on more pressing domestic and foreign challenges.

An obvious target would be removing the small military force in Syria that isn’t required to keep us safe but whose presence raises the risk of a larger conflict with the Syrian government and its Russian allies.

Another country where American troops should have been withdrawn from long ago is Iraq. The initial war itself was a major mistake, completely disconnected from our security or economic interests. Moreover, ISIS has been decimated, the Iraqi government itself has signaled that it would like us to leave, and our troops are exposed to frequent rocket and drone attacks in support of a mission that isn’t critical to our national security.

Stories of human tragedy will continue to come out of Afghanistan, which has been the sad norm in that country for decades now and which the United States has a limited ability to prevent. This should not dissuade Biden from following through with his plan to withdraw completely from Afghanistan, something the American people have long demanded.

Beyond Afghanistan, Biden should also have confidence that the American people would back bold action to reduce our footprint in the Middle East—something that largely eluded President Barack Obama, despite his publicly stated desire to the contrary. This presents an opportunity for Biden not only to solidify his foreign policy legacy, but also to enact a policy that would have popular support with a war-skeptical public.

William Ruger is the Vice President of Policy and Research for the Charles Koch Institute. He is a veteran of the war in Afghanistan and was President Trump’s nominee for ambassador to Afghanistan.