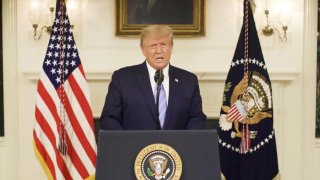 The Trump years have not been kind to American soft power—our ability to affect others through attraction rather than coercion or payment. Polls already showed a decline in our attractiveness in other countries after 2017, and this was compounded last year by Trump’s incompetence in responding to the Covid-19 pandemic. Now we start the new year with the shock of a mob invading the Capitol. While Senator Josh Hawley waved them on with a clenched fist, another Republican Senator Ben Sasse spoke critically that today “the world’s greatest symbol of self-government—was ransacked while the leader of the free world cowered behind his keyboard—tweeting against his Vice President for fulfilling the duties of his oath to the Constitution.” Our allies and other countries were shocked. Can our soft power recover from these blows?

We have done so before. Our country has serious problems, but it also has a capacity for resilience and reform that has rescued us in the past. In the 1960s, our cities were burning over racial protests, and we were mired in Vietnam War protests. Bombs exploded in universities and government buildings. The National Guard killed students at Kent State. We witnessed the assassinations of Martin Luther King and Robert Kennedy, and the flames were fanned by demagogues like George Wallace. Yet within a decade, a series of reforms passed Congress, and the honesty of Gerald Ford, the human rights policies of Jimmy Carter, and the optimism of Ronald Reagan helped restore our attractiveness.

Moreover, even when crowds marched through the world’s streets protesting American policies in Vietnam, the protesters sang Martin Luther King’s “We Shall overcome” more than the communist “Internationale.” An anthem from the civil rights protest movement illustrated that America’s power to attract rested not on our government’s policy but in large part on our civil society and our capacity to be self-critical and reform. One might consider that a “meta soft power.”

A country’s soft power comes primarily from three sources: its culture (when it is attractive to others), its political values such as democracy and human rights (when it lives up to them), and its policies (when they are seen as legitimate.) How a government behaves at home (for example, protecting a free press and the right to protest), in international institutions (consulting others and multilateralism), and in foreign policy (promoting development and human rights) can attract others by example. Wednesday’s example was awful, but we may recover from it.

For one thing, unlike hard-power assets (such as armed forces), many soft-power resources are separate from the government and attract others to our country despite politics. Hollywood movies that showcase independent women or protesting minorities can attract others. So too does our diverse and free press, as well as the charitable work of U.S. foundations and the freedom of inquiry at American universities. Firms, universities, foundations, churches, and protest movements develop soft power of their own which may reinforce others’ views of our country. Our peaceful protests can actually generate soft power. Of course, the mob in the Capitol was far from peaceful and provided a disturbing illustration of the way that Trump has exacerbated political polarization. But it was not a coup. On the contrary, the center held, the institutions worked, and the certification of Joe Biden’s election went ahead.

We have had an increase in political polarization over the past two decades, and Trump exploited and exacerbated nativist populism as a political weapon to take control of the Republican Party. Too many senators and Congress members were cowed by threats of a primary challenge by members of Trump’s base. Some still are. But in our federal system, it was local officials—Republicans, Democrats, and Independents—who did an honest job of carrying out an election under pandemic conditions. Our democratic political culture produced many local heroes such as secretaries and state legislators who stood up to Trump’s efforts to intimidate them into changing votes.

For those who mourn American democracy prematurely, it is important to remember that the 2020 election saw an unprecedented turnout of voters who were able to unseat a demagogue. And it was sustained in more than sixty court cases overseen by an independent judiciary including some of Trump’s appointees. And yesterday the outcome was finally reaffirmed by the Congress including the Republican vice president and Senate minority leader.

This does not mean that all is well with American democracy. Trump has eroded a number of democratic norms that must be restored. Polarization persists and a significant portion of Trump’s base believes his lies about the election rather than the evidence of the courts. Eight senators and more than one hundred representatives were profiles in cowardice or political opportunism. Social media business models remain based on algorithms that profit from extremism, and the companies are only slowly beginning to respond to their manipulation by conspiracy theorists.

January 6, 2021, may prove to be a day of infamy like December 7, 1941, but it could also go down in history as a turning point in which Trumpism peaked and some politicians began to take responsibility for the consequences of their rhetoric. So far, Joe Biden has been a calming voice. While it is too soon to be sure, if he can tame the pandemic, revive the economy, and provide a political center that eases the polarization, we may be witnessing the end rather than the beginning of a dangerous political period. If so, American resilience will once again lead to a recovery of our soft power.

Joseph S. Nye, Jr. is a former dean of the Harvard Kennedy School of Government and author most recently of Do Morals Matter? Presidents and Foreign Policy from FDR to Trump.