Americans are Being Terrorized By a Far Left-Wing Regime 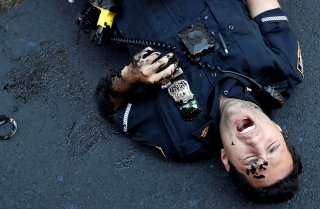 Are Americans ready for an attempted “color revolution,” if Democrats lose? Regardless of the potential success or failure of such an attempt, and it is about time, one considers that possibility.

Tucker Carlson recently noted on his right-wing show that, historically, when state power retreats, vigilantism, warlordism, and militias take its place, as a power vacuum begs to be filled. The irony is that a pedophile, a domestic abuser, and a convicted felon who took advantage of general lawlessness was shot by a teenager, who wanted to play “cop” in a city where the police officers were powerless to do much, and the city’s leaders were refusing to let them do anything. Carlson was quickly denounced by the rest of the media as a “racist” supporter of vigilantism. But Carlson isn’t factually wrong. The fact that “Republicans are supporting vigilantism” isn't much of an "own" (so to speak) in Democrat-led cities, as liberals seem to believe. Vigilantes rise only when state power retreats and there is a vacuum of authority, either due to incompetence, or cynical politicking. Either way, it is more harmful to liberals that they have let the situation deteriorate. The idea that one can appease anarchists, especially groups as devolved and disparate, with no leadership, fixed end goals or demands, is so ahistorical that it sounds absurd.

And yet, both Democrats and Never-Trumpers are not ready to admit that they are the ones who are responsible for this revolutionary moment, after playing the radical chic for the last four years. David French is concerned that a bunch of thugs accosting a young couple on camera for not raising their fist in support of Black Lives Matters during their dining out, in DC. Bill Kristol is concerned that Biden and Democrats need a firm grasp against the Jacobins in their ranks, bringing out guillotines in the nation’s capital and mobbing a sitting senator in the streets. Those same people who fomented a revolution for four years are now worried that the revolution is coming for them. On the other hand, one can see a NY University professor tweeting why one should not give any columns to the right of center writers. One can see a Teacher’s Union doing their best impression of being a Girondin. One can see a Reason editor baffled that anarchists are unreasonable, and an Atlantic editor suggests that this rebellion will calm down, once the symbol of hate, in this case, Trump is moved away. And finally, there are tax-funded news networks justifying looting in the name of social justice.

Liberal and neoconservative political theories argue that everything is simply tweaking technocratic managerialism, and all disputes can be solved with rational persuasion . . . so to speak. All a person has to do is sit for civilized debate. Politics, is bereft of power and hierarchy, in that scenario, and the only thing that matters is tinkering endless debates. But what if about 2 percent of the radicals in the country are determined to foment an uprising and are not inclined to go by the rules of a civilized debate?

Conservatives, on the other hand, talk about a coming backlash. One is almost tempted to write a play titled Waiting for Backlash because backlash never comes. The problem is not palpable anger at lawlessness, but a distinct lack of leadership to channel any anger to a backlash. Conservatives, especially British and American ones, are inherently skeptical of the concept of power and legislation. Which is why, even after having an eighty-seat majority in the British parliament, the conservative government cannot stop the BBC from canceling patriotic songs, or the head of tax-funded British library from claiming that every art and culture pre-1968 is racist or sexist and therefore deserve to be mothballed.

But theoretically, one cannot conserve an already revolutionary edifice, otherwise, the dissidents in East Europe would have never toppled Marxism. It, therefore, is time to accept that the West is already living under a revolutionary regime. It is time to accept that conservative neutrality and skepticism of legislation cannot historically face an aggressive social-reforming force. Power is balanced by power, not just by ideas. The current violence appears to stem from that same principle. Wherever the revolutionary force could change society, it has already done so. But whenever it is facing resistance from the normal public, it is taking politics to the streets. The difference is actually about a set of people who believe their version of progress is inevitable versus those who think history is compromise and coexistence. The former considers the latter a hindrance, and violence ensues.

It is a sense of entitlement perpetrated by a group of people who think they can simply dictate their whims on culture, based on their quirks and neuroses. But these people are also fanatical and leaderless with never-ending demands, and so they cannot be appeased. Nothing short of destroying Britain and America and dissolving everything pre-1968 would ever be good enough for them. And whenever part of society remains unchanged by a “death by a thousand cuts” attack from within its bureaucracy and news organizations (which is what happened in Britain) is being changed by brute force on the streets (which is happening in America).

And that is why, if Biden loses, there’s a serious chance that one will see city after city being blocked out, by a Ukrainian or Egyptian style “color revolution” on the streets, where Trump would be considered synonymous with Viktor Yanukovych, or Hosni Mubarak, only to be toppled by a revolution regardless of electoral win. Are Americans ready for a color revolution like the ones which took part in Georgia and Ukraine, or the type that took place in the early days of Arab Spring? Because there is every possibility that an attempted revolution will be made due to the very real eventuality of a Democratic loss in the future. The riots and subsequent shooting in Kenosha provide a glimpse of a future where a democratic city experiment is hoisted on the whole country. Many citizens are currently grappling with the question that maybe, just maybe, their elected leaders are tacitly supporting this anarchy. The paralysis will be the policy.