Americans Have Faith in the Military, But They Don't Understand It 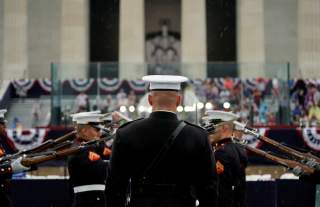 The American military is a central element of U.S. power and history, dominates discretionary spending, and remains the country’s most trusted institution. Despite these factors, it is peripheral to the daily life of most citizens. Fewer than one-third of young Americans meet the qualifications to serve in the military, and fewer still actually want to serve. The military also gets very little academic attention; scholarship happens mostly within specialized communities such as military history or strategic studies. As a result, the nation’s most expensive and trusted institution is remote from the population that provides the people and money essential to its existence.

Such an approach is inconsistent with a vibrant democracy. As Alexis de Tocqueville observed in Democracy in America, “armies always exercise a powerful influence” over the fate of democratic people. Assuming this remains true, for a healthy democracy some rudimentary understanding of the military should be injected into American high school civics courses; and universities and colleges should address it in their classrooms. The role of higher education is especially crucial to fostering a robust national conversation on how best to provide for the nation’s common defense. This is not to suggest a fundamental overhaul of curricula. Rather, the study of the military can be integrated into existing social science and humanities courses in a way that helps students understand it for what it is—a vital institution that belongs to the nation.

In this spirit, as a new academic year approaches, I’d like to offer seven themes that emerged while I was writing Demystifying the American Military. If professors tweaked their syllabi to incorporate them, they could deepen understanding of the relationship between the American military and the nation it serves.

Learning military basics is akin to building a vocabulary in another language. A working knowledge of the military starts with its organizations (e.g. services, combatant commands), cultures (e.g., joint versus service cultures), and officer and enlisted ranks. Having this background builds confidence and makes the military appear less monolithic simply by revealing the diversity of organizations and their personnel. Professors generally consider such information too basic to deserve precious course time, but students crave this information. Anyone whose studies or research touches on the military should know the difference between an Army captain and a Navy captain; or that by referring to everyone wearing a camouflage uniform as “soldiers,” they reveal how little they know about the military. If professors don’t want to cover this material, they could collaborate with others, such as local Reserve Officers Training Corps (ROTC) detachments.

The Military Is More Complex Than You Think

The very creation of a full-time national military was a controversy in the early Federalist versus Anti-Federalist debates over the Constitution. Sustaining and expanding it has proved equally fraught with problems since the earliest days of the Republic. For example, President Thomas Jefferson’s insistence on building a fleet of smaller gunboats to defend U.S. ports starting in 1805 diminished the Navy’s ability to defend the nation’s shores in the War of 1812. Understanding the complexity of military leaders’ responsibilities, especially in wartime, is also important. Gen. Dwight D. Eisenhower might have exercised immense power as the allied commander of the Normandy invasion, but he knew without the cooperation and leadership from the other U.S. military services, not to mention America’s allies, the invasion would fail. Hence, he devoted much of his time as commander to building and maintaining this complex coalition. The American military is an immensely complicated, capable, expensive and at times even fragile institution. Students need a deeper awareness of how difficult it is to build, sustain, use, and then rebuild the U.S. military to ensure it is always ready when the nation needs it. Such understanding can be fostered by using seminar discussion to highlight the issues, and then use exercises, tabletop wargames or other experiential learning approaches to make the challenges more apparent.

The Onset of Peace Disrupts the Military

Unlike corporations, the U.S. military services are protected from foreclosure, bankruptcy, hostile takeovers and the like. Still, they periodically undergo severe disruptions, especially at the end of conflicts when there is a perceived loss of purpose and resources are shifted back to peacetime needs. What ensues is a struggle for relevance that some services even see as a struggle for survival. A prime example is the upheaval after the military’s great victory in World War II. The postwar rush to downsize exacerbated competition for future roles and missions—and hence personnel and budget. The 1947 creation of a fourth independent service, the U.S. Air Force, heightened these tensions. The new Air Force’s insistence on sole ownership of the nuclear mission and the Navy’s equally ungracious response, in fact, led to an unseemly fight over funding between the B-36 strategic bomber and a new class of naval “supercarriers.” Both the Navy and Air Force were diminished by the fallout from this struggle. Faculty in political science, sociology and history departments, in particular, should push students to consider the institutional impact of peacetime—not just wartime—on the American military. These conversations could help prepare students for the complex institutional issues they’ll face if they enter the world of public policy.

World War II should inform any curriculum designed to get at defense issues and not be left to the purview of military historians. For the Army, with six million men and women in uniform, the war validated its belief that the Army was America’s service, capable of vast and complex operations in Europe and the Pacific. For the Navy, the war proved its ability to conduct simultaneously epic fleet actions in the Pacific and dangerous convoy operations in the Atlantic. For the Marine Corps, it reinforced its reputation as the nation’s elite fighting service. For the Air Force, World War II was nothing less than the proving ground for its future as an independent service. The 1947 National Security Act codified many of the lessons learned in the war. And several of the institutions that emerged from the conflict still guide today’s military, including the Department of Defense, the Joint Chiefs of Staff, and the combatant commands. Subsequent legislation (especially the Goldwater-Nichols Act) reshaped these institutions and responsibilities, but to understand their origins, one needs to return to World War II.

The Biggest Ongoing Challenge Is People

Rarely in the nation’s history have there been enough volunteers to serve in uniform. This raises three fundamental questions for military and civilian leaders. First, what tasks does the nation absolutely need military personnel to accomplish? Second is a draft needed for that? Third, if a draft is unrealistic and the military cannot fill its ranks with volunteers, what are the other options available? This third scenario is a current focus for military and civilian leaders. Possible solutions range from more outsourcing to more automation to seeking new answers through advances in artificial intelligence. What is often missing from such proposals is any explicit discussion about their impact on military and service-specific organizational cultures, and the ethical considerations associated with them. At the height of Operation Enduring Freedom, for example, contractors significantly outnumbered U.S military personnel. As a nation, are we turning to contractors as the expedient solution to compensate for a lack of people willing to serve? If so, is that the right solution?  If the answer rests in greater reliance on artificial intelligence, what are the ethical implications of such a decision? The academy should play a major role in educating American citizens, not to mention future policymakers and military leaders, on issues like these. This is a particularly rich area for interdisciplinary thought leadership and partnering, similar to how physicists and social scientists shape the early debates surrounding nuclear weapons.

The Paradigm for Military Service Is Shifting

The four U.S. military services have shared a fundamental connection—the importance of mastering, managing and, when necessary, employing organized violence on behalf of the nation. Recent defense initiatives, however, have created new organizations that, while crucial to the nation, have tenuous ties to organized violence. The most noteworthy are Cyber Command, the new Space Command, and the soon-to-be independent Space Force. With large civilian and contractor workforces, their organizational cultures presumably will be more civilian and technical in nature than the traditional military, with little emphasis on the physical demands of using, and being subjected to, violent means. I have argued elsewhere that such organizations belong to a new, emerging Guardian Force, but whatever these organizations are called, their relationship to the military needs to be better understood. Accountability in and oversight of these quasi-military organizations is an issue political philosophers, political scientists and international relations specialists, among others, are especially suited to address.

The essence of civilian control of the military resides the Constitution. Articles 1 gives Congress general responsibility for the declaration of war, appropriation of money and the “government and regulation” of the forces; and Article 2 identifies the president as commander-in-chief. At the cabinet level, the secretary of defense helps the president exercise his executive responsibilities for civilian control. In 1949, Congress created the Office of the Secretary of Defense (OSD) to assist the secretary. Expansive growth ever since, has turned OSD into a huge, amorphous entity with multiple, often conflicting, agendas. OSD now simultaneously fulfills its original purpose as the secretary of defense’s staff; serves as the rough equivalent of a military department (e.g., Assistant Secretary of Defense for Special Operations and Low Intensity Conflict); and houses large, independent defense agencies (e.g., Missile Defense Agency).