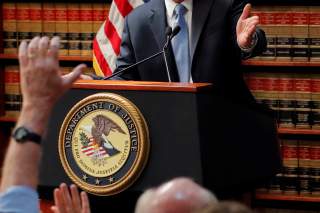 U.S. courts ultimately did not have a chance to rule on the military’s power to detain enemies of the Iraqi government under either the AUMFs or Article II. The Trump administration settled the case out of court in October 2018, agreeing to release Alsheikh to Bahrain, where his wife is from.

The case of Doe v. Mattis is technically still active, as parties are fighting whether to keep elements of the case a state secret. (The National Interest was able to obtain the unredacted May 2018 ruling thanks to a lawsuit by New York Times journalist Charlie Savage to unseal that part of the case.) But the legal questions around war powers will remain untouched until the next big detainee case.

Until then, the Trump administration plans to use the “extra authority” from the 2002 AUMF, as String put it in his July 2019 testimony.

“No court has yet ruled on the lawfulness of the government’s claimed authority to engage in conflict in multiple countries around the world,” Shamsi told the National Interest. “In order to rein in the breathtaking and virtually unlimited authorities that the Trump administration is claiming, Congress should act.”