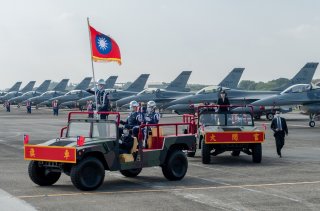 In a recent talk with the Lowy Institute, Jake Sullivan argued for a détente with China. Arguing that America recognizes that China is going to be a factor in the international system for the foreseeable future, Sullivan said that there should be effective and healthy competition with China. “We are not seeking a new Cold War, we’re not looking for conflict, what we’re looking for is effective competition with guardrails and risk-reduction measures in place to ensure that things don’t veer off into conflict. And also with the capacity to work together with China, where it’s in the common interests of our countries and in the interests of the world to do so,” Sullivan argued, adding that China is not going anywhere, but nor is the United States. A coexistence is, therefore, necessary, and rightly so.

What was not mentioned in that speech and subsequent conversation even once was the word “Taiwan.” And incidentally, the same day there were news reports about U.S. congressmen visiting the island nation. What was even more surprising was that a day from the talk, Secretary of State Antony Blinken said that the United States and allies will “take action” if Taiwan was invaded or any alteration of the status quo was done by force. “Blinken did not say what sort of action he was referring to,” the Reuters report noted, claiming immediately after that “Those remarks appeared to depart from a long-held policy of “strategic ambiguity,” not making clear how the United States would respond.” On the contrary, one must add, that everything in the last few days made it feel that the United States is not just ambiguous about China’s border question but is fundamentally rudderless. Ambiguity here is not a strategy, but a byproduct of cluelessness.

This is not surprising. China has been the topic of debate everywhere I went in the last few months and is the topic that divides not just the foreign policy community overall, but also the realists in particular. Everyone agrees that the rise of China is a significant factor and that all else being equal, the rise of Chinese hard power would result in some revanchism abroad. But that’s where the alignments end. In the recently concluded Second National Conservative Conference in Orlando, former Trump national security spokesperson Michael Anton of the Claremont Institute was called an appeaser of China by the neoconservative Hudson Institute’s Michael Pillsbury. It was a particularly bizarre moment in the overall ideologically incoherent venue. But China also dominated in other conferences. In the Advance Security summit in Washington, DC, John Mearsheimer argued for confronting China, whereas Ben Friedman and Eugene Gholz argued for a more offshore approach. Elsewhere, former U.S. deputy assistant secretary Elbridge Colby argued that we must defend Taiwan, to the point that even after the island falls, America and allies must go to war with China to retake the island back.

Ultimately, what appears is that there’s an increasing disconnect between the objective of the U.S. and the subject of the target. Everything starts, therefore, with a few key questions. First, is China a revisionist or a status quo power? Do we have sufficient information to decide on a grand strategy? China being a status quo power would mean a satisfied Chinese power with a more elevated place in the Asia Pacific balance. Commensurate with the Chinese rise in GDP, Chinese interests are going to expand, and with those Chinese military power. But as long as China is willing to work within the established framework, that should not be an issue unless the United States goes all-in on a primacist grand strategy. A greater risk, however, is the United States turning from a status quo power to a revolutionary power seeking to export its ideologies across Asia, which will certainly mean not just alienating potential partners such as a majoritarian and increasingly illiberal India, but also creating a conflict with China.

The second question then is what will be the ultimate American objective? If America’s objective is primacy at all costs, then there is no chance of coexistence no matter how much Sullivan argues for it because any even minimal growth of Chinese power is a threat to the balance which needs to be redressed at any cost. That would mean the destruction of Chinese power if the need arises. The third question is what the United States means by the destruction of the Chinese power in Asia. Does that mean working towards the collapse of the Chinese government and communist party and defending or promoting democracy? Or does that entail containment and the neutering of Chinese power with a chain of alliances surrounding China, without any effort to roll back Chinese power? The former will lead to war, most importantly but not exclusively, over the status of Taiwan. The latter would have no problem with Taiwan falling to China as long as that means twenty years of Chinese quagmire in pacifying a rebel province. The former would see Taiwan as a unit to defend and a tool towards the ultimate goal of checking China. The latter would believe that the broader balance of power doesn’t alter in Asia even with Taiwanese collapse, as China will still be surrounded by Japan, India, Vietnam, and Australia, and there’s no indication about Chinese will or capability regarding an expansionist war of conquest across Asia.

The final question is whether the Americans know what the full cost of sliding to a great power war with a nuclear rival entails, especially over a territory barely miles from Chinese coastal missile batteries. Most Americans are neither aware of how civilization-destroying even a limited nuclear war can be. To give an example, the total casualties of the War on Terror for twenty years, including the 9/11 attacks, were around 12,000 dead and several thousand injured. The number of people dead if a carrier group is sunk in the first hour of a full-contact fight will be more. And that’s not even half a day of fighting, in one specific domain. Not to mention, air force and missile attacks, or God forbid a nuclear showdown. Are Americans willing to go to war for Taiwan, and risk such numbers of casualties?

Ultimately, however, the bigger challenge will not be about facing China in a nuclear showdown. As the brief India-China border clash in the Himalayas (with spiked clubs and hatchets) showed, most great powers now know the risk of a nuclear showdown and are, therefore, gearing up for premodern conflicts below the threshold of war. Same Roman legionnaire tactics are now being seen in the Polish-Belarus-Ukrainian border to defend Europe from weaponized mass migration, a problem that is not just limited to Europe. A far more existential question is whether the Western force structure is ready for such a grey-zone conflict. The answer, given the current American trends, might not be satisfactory.