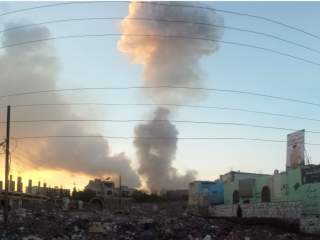 Back in February, the Islamic State released horrific footage of a Jordanian pilot being immolated to death in a cage. Jordan responded by deploying thousands of troops to its border with Iraq and bombing ISIS targets. King Abdullah emerged in a flight suit, writing a thousand viral headlines and sending Western hearts aflutter. “It is our war. It has been for a long time,” Abdullah said.

The campaign against ISIS may indeed be Jordan’s war, but Abdullah doesn’t consider it his most important war. That would be the campaign in Yemen, where a coalition of Arab nations is bombing the allegedly Iran-linked Shiite Houthi rebels. This has diverted our Middle Eastern allies’ attention and jets away from the Islamic State: Bahrain last bombed Syria in February, the United Arab Emirates in March, and Jordan in August. Contributions from Saudi Arabia and Qatar have been similarly meager.

It’s not unusual for America to do the lion’s share of the work during interventions in the Middle East. Since last year, the United States has conducted the vast majority of the airstrikes against the Islamic State, and “leading from behind,” while an effective taunt for Republicans, was always a misnomer for the America-dominated campaign in Libya. Nevertheless, Yemen does stand out as a unique distraction for our allies. “It’s sucked up all the sorties and ground forces that we had wanted to deploy in Iraq and maybe in Syria,” one Pentagon official told the Washington Times.

The United States is supporting the war in Yemen by providing weapons and sharing intelligence. This has helped induce a humanitarian disaster. A Saudi blockade at major ports has left Yemen, already the poorest country in the Middle East, woefully short on petroleum, water, and food, with the United Nations warning last week that half the country is at risk of famine and 82 percent is in need of urgent aid. The UN is also worried extreme weather could trigger a locust plague next year, a crisis of literally biblical proportions.

Arab nations, led by Saudi Arabia, have been pummeling Yemen from the sky, resulting in a death toll of 5,700 between March and mid-November, the vast majority of them killed by airstrikes. The destruction of a Doctors Without Borders hospital in Afghanistan by American aircraft dropped jaws across the Western world; less publicized has been the bombing of a DWB clinic in Yemen that wounded nine people and was conducted despite the Saudi coalition having been regularly provided with the facility’s coordinates. A report from Human Rights Watch investigated ten coalition attacks in Yemen, and found that in every case there was either no target of military value or no effort made to distinguish between civilians and armed forces. And with America a party to the conflict, the “U.S. could share responsibility for indiscriminate attacks,” it warned.

It’s shameful enough that our Yemen policy is enabling the destruction of civilians, but it’s also empowering our jihadist enemies—and not only by rerouting Arab planes away from Syria. The violence in Yemen has created yet another void that’s been exploited by those savants of instability, the Islamic State. ISIS first proffered salutations to Yemen in March when it blew up two Shiite mosques in Sanaa, killing 142 worshippers. Since then, it has gradually turned up the terroristic burner, culminating in an alarmingly high-profile car bomb attack that killed the governor of Aden earlier this week.

The Islamic State’s presence is most strongly felt in northern Yemen, where the group has managed to infiltrate impoverished Shiite enclaves under Houthi control. But Aden is a port city on the country’s southwestern coast. The assassination there suggests ISIS’s influence is quite extensive. Also spotted in Aden: the black flag of Al Qaeda in the Arabian Peninsula (AQAP)—considered the affiliate of Al Qaeda most determined to attack the United States—fluttering over trucks and government buildings. One local official told the AFP back in October that he “fears the city will fall under their total control in the absence of the state.” That has yet to happen, but Al Qaeda did conquer the nearby cities of Zinjibar and Ja’ar. (Subsequent reports indicate it’s been driven out of Ja’ar but not Zinjibar.) The Saudi coalition has taken a hands-off approach to AQAP, allowing it to metastasize across the country’s east and south.

So to review, the United States is seeking to destroy Islamic extremists. It’s also abetting a war in Yemen that’s given elbow room to Islamic extremists and lured our allies away from the fight in Syria. This is what’s known among foreign policy scholars as “clinical insanity.”

The Houthis are an unsavory bunch of characters—they overthrew Yemen’s president and have committed atrocities of their own—but they also despise Al Qaeda and ISIS as much as we do. They’re not our enemies and the coalition’s sledgehammer-against-a-fly approach to destroying them isn’t helping anyone. We need the strutting King Abdullah and our other Arab allies to return to Syria and take on a constructive role, so Sunnis there don’t feel like they’re the victims of an American crusade or a Soleimani-masterminded sectarian war.

As long as the war in Yemen rages, that’s unlikely to happen. If the United States wants to destroy the Islamic State, it needs to first pull the gun away from its own foot.