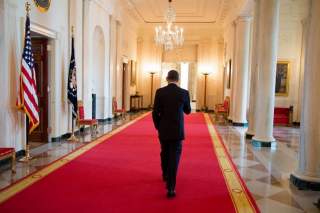 Truman’s inherited term was truly heroic, with policies and initiatives that brought about a smooth transition from war to peace and set the stage for a successful effort to parry Soviet ambitions, particularly in Western Europe. But he struggled in his second term, and particularly with his Korean war. It’s difficult to question Truman’s rationale for entering the war, conducted officially under United Nations auspices, and it appeared he was heading for success after General Douglas MacArthur’s brilliant Inchon landing split the communist forces and paved the way for America’s northward advance toward the Korean-Chinese border.

But it all turned sour when China sent 300,000 battle-tested troops against the American and South Korean armies. That led to a protracted, painful stalemate, and for the next two years Truman struggled with a war he could not win, could not walk away from, and could not afford to lose. During that time, Washington faced the dual prospect of a devastating strategic defeat or a world war. By the time Truman entered the campaign year of 1952, his approval rating hovered around 23 percent—still the benchmark low for all presidents since polling began—and it was clear he had no prospect of running successfully for a second full term. His successor, Eisenhower, quickly reached a negotiated settlement by renouncing an all-out victory and accepting a communist North Korea. But U.S. troops remain in South Korea to this day as a testament to the mixed outcome of a sad military episode in U.S. history.

In one sense, it may seem unfair to place Obama in company with these other wartime presidents. For one thing, he didn’t initiate these wars but rather inherited them from George W. Bush. For another, the situation he inherited didn’t deteriorate into the kinds of messes characterized by these other tales of presidential failure. Third, it probably says something about America’s wartime history that an effort to list the five most hapless wartime presidents pulls into the mix a man such as Obama, whose wartime record only slightly places him in the category of failure.

On the other hand, presidents don’t get to make excuses based on what they inherit in taking office, nor do they get to trim on defining their success in relation to the performance of their predecessors. Obama inherited a mess; his job was to clean it up; on balance the situation got worse on his watch—not only in Iraq and Afghanistan but also in the surrounding region.

Remember how Nixon extricated the United States from Vietnam while ending Chinese isolation and bolstering the democratic capitalism then stirring in Asia. He succeeded because he had a grand strategy for the region. Obama never developed a coherent strategy for the Middle East. He embraced the idea of building democracy in Afghanistan but placed a time limit on his involvement there. Building democracy was never going to work, but particularly was it going to fail when the forces of old—Taliban chieftains and other sectarian leaders—knew that all they had to do was wait out the intervention. The policy made no sense, and there’s little in the country to show for it.

As for Iraq, there’s some truth in the argument of the American right that Obama inherited a relatively stable situation that turned unstable on his watch. It may not be entirely fair, given that it was George W. Bush who unleashed the regional whirlwind with his Iraq invasion. But politics isn’t always fair, geopolitics even less so. And it was Obama’s responsibility to maintain the stability level he inherited. It may be an open question whether leaving a military force in Iraq as a show of U.S. resolve would have ensured such stability. But he needed to pursue whatever policies could have built on what he inherited. That he didn’t manage that is probably related to his apparent confusion about just what his policy philosophy should be in the region.

He helped destabilize Libya when Muammar Qaddafi came under internal pressure, but stood back when Syria’s Bashar al-Assad encountered a similar revolt. He piled on when the longtime U.S. ally Hosni Mubarak ran into trouble in Egypt, then remained largely mute when Egypt came under the control first of the Muslim Brotherhood and then of the old military oligarchy. He mocked the significance of the ISIS menace in Syria and Iraq, then committed America to degrading and destroying that truly ominous force once it had gained a major foothold in both countries, much to his surprise.

In the end, he inherited a bad situation, and it got worse during his presidency. That is not a wartime success story. Thus does he fall into the category of the country’s five worst wartime presidents.