America's Adversaries Are Not Happy with Trump 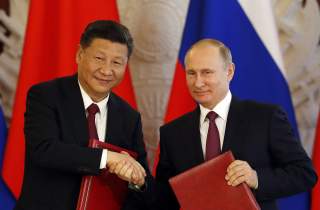 There was no pressing reason for Xi Jinping to stop off in Moscow for a summit meeting with Russian president Vladimir Putin. There have already been two recent high-level contacts where critical issues in the Russia-China relationship were discussed. The Chinese leader had already met with Putin at the Shanghai Cooperation Organization summit in Astana a month ago, and the Russian head of state had traveled to Beijing in May for the “One Belt, One Road” conclave. And both leaders, of course, were already scheduled to meet on the sidelines of the G-20 summit in Germany later this week. No, the decision for Xi to travel to Moscow first and for Putin to host him in the Kremlin is meant as a direct and clear message to the United States and to the Trump administration before the President leaves for Europe: we aren't pleased with the direction of U.S. policy, and we have options.

The agenda reads like a bill of particulars against U.S. actions in the last several months: missile defense deployments in South Korea, freedom of navigation operations around Chinese-claimed territories in the South China Sea; the U.S. posture towards Ukraine and American actions in Syria. The common thread to these discussion points is continued dislike of the assumption that the United States has the right to act without consultation or following its own interpretation of international rules. The fact that these points were discussed suggests that Putin and Xi plan to present a united front against Donald Trump at the G-20 summit in Hamburg. Given that Xi will fly from Moscow to Berlin to then meet with German chancellor Angela Merkel, who has expressed her dissatisfaction with the stances taken by the Trump administration on trade and the environment, it indicates that efforts are underway to make the American president the odd man out at this gathering of the leaders of the leading powers, and to prevent him from dominating the agenda. For Putin, who still has very clear grievances at the attempt of the Obama administration to try and freeze him out at the 2014 G-20 summit in Brisbane, Australia, it may prove to be a pleasant change to have Trump be the focus of ire and irritation.

One must also assume that Xi is giving Putin the benefit of his experiences during his face to face meetings with Trump at Mar-A-Lago earlier this year, as well as his “read” of the American president, prior to Putin's own first direct encounter at Hamburg. This could prove to be very critical in how that meeting unfolds. Xi, of course, was honored with a meeting with Trump in the more intimate setting of Trump's Florida hideaway, but was also “interrupted” by the decision to launch an American cruise missile strike on a Syrian air base in retaliation for a chemical weapons attack in Idlib. Will Xi convey a sense that Trump employs a bit of Richard Nixon's “madman” approach and that one must be cautious in dealing with the U.S. president? Will he advise Putin that Trump talks a good game but then can't seem to get his preferences through the U.S. policy process? (A precedent Putin has already experienced with Barack Obama and George W. Bush.) And does Xi still believe it is possible to do business with the Trump administration, or will he counsel the Russian president that expectations about Trump the deal maker were overrated? Or, given the political turmoil in Washington, it is time for both Moscow and Beijing to forge ahead and create more “facts on the ground” whether in Ukraine, Syria or the maritime zones of the Pacific?

Of course, China and Russia remain cautious in defining the limits of their strategic embrace. Both will complain about U.S. actions and promise verbal and moral support, but neither Moscow nor Beijing has been pushed—yet—to consummate any sort of Eurasian entente. Neither side has completely foreclosed on the hope that, at some point in the future, Donald Trump the deal maker will gain bureaucratic control of the U.S. national security apparatus and be prepared to sit down to negotiate.

One area where Moscow and Beijing do seem eager to move forward is to give themselves some breathing room to lessen the impact of the economic and financial tools that the United States can wield. The $10 billion Russia-China RMB Fund that was announced is designed to further wean bilateral trade between the two countries off dependence on the U.S. dollar and for future major economic projects not to require use of U.S. dollars or access to Western financial markets in order to be financed. This is part of the ongoing effort to “sanctions-proof” the Russian economy and builds on the model used by the French company TOTAL in safeguarding its critical investment in the Yamal gas project from past Western sanctions by relying on Chinese sources of financing. With this agreement in hand, Putin can meet Trump with a greater degree of confidence that, even as new sanctions measures move forward in the U.S. Congress, Washington cannot cut Russia out of the global economy by replicating the same legislation that was applied to Iran. Further discussion of contracts related to infrastructure and energy projects that arise out of the One Belt, One Road proposals also allow Putin to demonstrate that Russia cannot be completely isolated. In addition, there is a understated but clear warning to an administration that has made increasing U.S. jobs a priority: if proposed new U.S. sanctions are prepared to target Russian projects outside of Russia and to impose third party sanctions on other countries doing business in Russia are enacted, then American firms are likely to lose out by being denied the ability to sell goods and services for these ambitious Eurasia-wide projects, lost orders which other European and Asian companies will be more than happy to fill, often with “national interest” exemptions to their own sanctions on Russia.

Certainly, we have seen this talk before, about greater Russia-China ties, only to witness how rhetoric is not always translated into reality. In the past, the U.S. has benefited from China's unwillingness to invest too much in Russia or Russian worries about falling under Chinese economic domination. Kirill Dmitriev, the head of the Russia Direct Investment Fund, suggests that this time, it might be different—that with the new fund, “it will give a powerful impetus to increase the volume of cross-border direct investment and significantly increase the number of jointly implemented projects.” Reluctantly, but inexorably, Russia and China are drawing closer together. The Moscow summit signals that the Trump administration needs to take seriously the prospect of increased Russia-China collaboration that is explicitly designed to limit U.S. options and constrain U.S. power.