America's Afghanistan Problem: It's Not Just about Sending More Troops 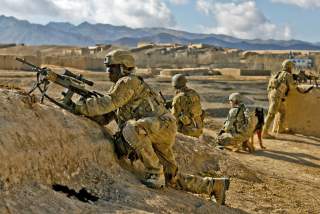 Reportedly, the Trump administration is considering adding several thousand U.S. troops—ideally accompanied by other NATO and foreign reinforcements too—to the U.S.-led mission in Afghanistan. The current mission totals some 8,500 Americans, and roughly twelve thousand foreign troops in all, so the possible increase could amount to an augmentation of 30–50 percent in total personnel. In my judgment, this kind of increase would be sensible, for reasons discussed below.

Before examining the numbers issue, however, a few other quick points need to be made about our ongoing commitment to Afghanistan, now in its sixteenth year. First, those who have been saying for years that the United States does not have the strategic patience or political resilience to remain committed to a long and tough mission for many years have been definitively proved wrong. That is a good thing, not just for Afghanistan, but for what it says about America’s strategic ability to stick with a tough job even when the results are mediocre and the stage lights have dimmed, so to speak. Second, the Trump administration seems to be implicitly accepting that it will remain in Afghanistan throughout much—if not all—of the president’s first term. For example, there would be little purpose in talking about a buildup this year if our intention was simply to pull out next year, for example. Happily, there seems to be a good chance that the United States will end its annual policy reviews that consider zeroing out the U.S./NATO presence in the country, as happened in the latter years of the Obama administration. A mission that has been called Operation Resolute Support since 2015 may now fully deserve its name.

Beyond these subjects are the issues of Pakistan, Afghan political and economic reform, and the peace process with the Taliban, such as it is. On the first matter, many American voices on the Left and the Right are calling for a tougher U.S. approach to Pakistan—one of the top “frenemies” in American foreign policy today—due to its tolerance of Taliban sanctuaries on its soil, even as it cooperates with the United States over Afghanistan in other ways. Already we have cut aid to Pakistan considerably. We could cut more; we could designate Pakistani individuals and organizations supporting the Taliban and sanction them; we could strike Taliban targets within Pakistan with even less restraint than has been the norm to date. More positively, we could also eventually offer incentives—a free-trade agreement or increased aid—if Islamabad will restrict its support for the Taliban or cut it off altogether.

As for Afghanistan's tortured politics and ongoing affliction with corruption, there is actually some hopeful movement to build upon. The much-maligned government of President Ashraf Ghani and Chief Executive Officer Abdullah Abdullah, while hardly a picture of harmony, has held together. The corrupt warlord, Vice President Rashid Dostum, may have been just pushed into temporary (or perhaps permanent) exile in what would be a welcome development. Ghani is personally overseeing the awarding of government contracts. This slows down the wheels of government, but it also allows him to create more transparency and pressure against corruption. For its part, the United States is more diligent about how it provides aid and spends money for its forces in Afghanistan than was the case six or eight years ago—with far less money now falling inadvertently into Taliban hands.

There is a long ways to go on all these fronts. Among other things, the Afghan electoral commissions that will have to oversee parliamentary and presidential voting in the next two years or so remain weak and underresourced. The same is true of the Afghan judiciary writ large. So the military mission in Afghanistan cannot be viewed in a vacuum, of course, and broader state-building efforts must continue.

As for the moribund peace process with the Taliban, the top requirement for progress is greater acceptance on the part of the Taliban that it is not going to win the war or take over the country, that a constitutional system protecting all Afghans—including women—will therefore remain in place, and that foreign personnel will remain in Afghanistan for the foreseeable future to help with development and security. Thus, the most important thing the United States can do for the peace process now is to help stabilize the military situation so as to disabuse the Taliban of its delusions of grandeur and victory. According to U.S. Central Command and the Special Inspector General for Afghanistan Reconstruction (an independent oversight mechanism set up by Washington, DC), the Afghan government’s hold on the country has slipped from roughly 70 percent to just under 60 percent of population and territory over the last half decade, with about 10 percent of the nation now in Taliban hands and 30 percent contested. It would be nice to reverse these trends; it is essential that they not get worse.

Which brings us back to the issue of troop strength. Back in the 2013 time frame, outgoing International Security Assistance Force Commander Gen. John Allen prepared a study in which he examined what U.S. troop strength, as part of a broader NATO-led effort, might be adequate for the longer haul after that ISAF effort concluded the following year. According to public reports, Allen estimated that some 13,500 American troops might be needed, or roughly five thousand more than President Obama ultimately approved. Those troops would also need greater authorities to call in U.S. airpower quickly against Taliban targets—permission that Obama denied but that Trump seems to be granting to at least some an extent.

The tyranny of the troop math is roughly as follows. With 8,500 uniformed Americans in country, the United States can maintain about a half dozen major bases, including those at Bagram, near Kabul and Kandahar. Each of those bases requires at least one thousand U.S. troops to provide for robust self-defense, to operate aircraft and drones and intelligence-gathering systems, and to provide central mentoring for the Afghan army and police. U.S. participation in national-level training for Afghan forces adds a further requirement for one thousand or more troops. In other words, the United States needs those 8,500 or so forces just to operate a half-dozen bases (including in eastern Afghanistan, near the Pakistani border, where the Islamic State has a presence) and provide central training and mentoring—in conjunction with other foreign forces—plus contractors.

What we do not have today is the capacity to mentor Afghan forces in the field. Indeed, in 2015 we did not even have a full-time advisory presence for the main Afghan army corps in Helmand province, the beleaguered 215th Corps. Largely as a result, that Afghan army corps lost much of the province to the Taliban; the United States is now playing catch-up trying to help it rebuild. Additionally, the United States didn’t have adequate advisors to help the smaller Afghan formations (a brigade, as well as a couple of its constituent “kandaks” or battalions) near Kunduz before that city fell temporarily to the Taliban in 2015.

General Allen’s plan would have provided the capacity for several dozen deployable mentoring teams—hardly enough to assist each Afghan kandak, but enough to support units that were engaged in the toughest fights and/or most intensively involved in rebuilding their own capabilities (perhaps due to replacement of previously inept or corrupt leadership with better officers). If each of those teams required twenty people on site, putting twenty-five to fifty in the field would entail up to one thousand troops. But supporting those teams logistically, and sustaining quick-reaction forces in several parts of the country to help them if they got in trouble, would drive additional requirements into the low thousands. That is, in rough terms, the arithmetic behind much of the current request by Gen. Mick Nicholson for additional forces, as I understand it.

In other words, in Afghanistan today, rather than talk of cutting forces further, the United States needs to first go back to the future—or perhaps it’s more accurate to say, go forward to the past—and redo the phase of the mission that it unwisely skipped in 2015 and 2016. By “escalating to deescalate,” the United States may not achieve a brilliant victory in Afghanistan, but it can improve significantly the odds of avoiding defeat, and of shoring up its eastern flank in the broader fight against extremism and terrorism. The proposal before Trump makes good sense and is worthy of serious consideration.