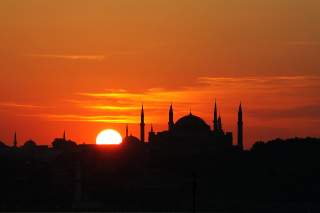 SHORTLY BEFORE his death in 1869, the pro-Western former Ottoman grand vizier and foreign minister Keçecizâde Mehmed Fuad Pasha commented, “It appeared preferable that . . . we should relinquish several of our provinces rather than see England abandon us.” In response to this commitment, the British made the territorial integrity of the Ottoman Empire against Russian aggression a key pillar of their foreign policy.

Yet, in spite of the significance that Istanbul and London attached to their alliance in the 1850s, both sides were determined to eradicate each other by 1914. As Prime Minister Herbert Asquith put it, Britain was “determined to ring the death-knell of Ottoman dominion, not only in Europe, but in Asia as well.” In response, the Ottoman government described the British as “the greatest enemy” of not only the sultan’s empire but also of Islam itself.

The startling breakdown in Anglo-Ottoman relations might serve as a useful model for policymakers to evaluate the troubled alliance between the United States and Turkey. The sixty-year period between the Crimean War of 1853–56 and the July Crisis of 1914 resembles the era that opened with the admission of Turkey into NATO in 1952 and appears to be ending today. As the Anglo-Ottoman case warns, alliances formed in response to an external threat between powers that view each other as cultural “others” may deteriorate after the threat diminishes. Suffering from such alliance fatigue, erstwhile partners become clashing rivals.

THE ANGLO-RUSSIAN Great Game, waged across the vast lands stretching from Europe to Central Asia during the nineteenth century, rendered the Ottoman Empire an invaluable strategic asset in the eyes of British policymakers. Although the British public frowned upon the Ottoman Turks’ “peculiar Oriental ways,” and regarded them as “uncivilized Mohammedan barbarians” for their treatment of Christian subjects, Whitehall recognized that they could serve as a bulwark against Russia.

The Ottomans, likewise, recognized the value of having Britain as an ally given the looming threats posed by their neighbors, Russia and Austria. Though the Ottomans previously regarded the British as an untrustworthy non-Muslim power, the cooperation was a win-win venture, and the two powers agreed to partner economically and militarily. The strategic collaboration between them reached its zenith in 1853 when, along with other allies, they successfully waged war against Russia in Crimea.

America’s relative indifference to the Ottoman Empire and the early Turkish Republic was reminiscent of Otto von Bismarck’s famous remark that European Turkey “was not worth the bones of a single Pomeranian grenadier.” The United States and the Ottoman Empire fought World War I on opposite sides, but did not clash with each other. Moreover, while President Woodrow Wilson discussed the future of the Ottoman Empire in his Fourteen Points, the United States did not actively participate in its partition. In 1922–23, Washington merely sent observers to the Conference of Lausanne, which produced the final peace treaty between the victors of World War I and Turkey. Though these observers helped Turkey reject British demands on Mosul oil through the Turkish Petroleum Company—an enterprise that was Turkish in name only—American involvement in Turkish affairs ended there. The United States secured the interests of American oil companies while frustrating British plans to cartelize Middle Eastern oil. Beyond this, Turkey was not worth the bones of a single American GI.

Though Turkey was a remote power representing an inherently different culture, exchanges between the nation’s modern founder, Mustafa Kemal Atatürk, and President Franklin D. Roosevelt reveal that, by the late 1930s, Washington viewed Ankara’s example as a model for the region. Early on in the Cold War, the United States moved to expand its relationship with Turkey. President Harry Truman reckoned that a friendly Turkey would be a strategic asset capable of containing the Soviet expansion into the Middle East, keeping the Soviet Black Sea fleet at bay and providing military bases whence to attack the Soviet Union. Turkey could additionally safeguard American interests in a region gaining in importance thanks to its rich oil reserves. Ankara similarly stood to benefit from U.S. protection. Threatened by Joseph Stalin, who condescendingly demanded the return of two provinces in Eastern Anatolia to their “motherland” and requested “joint” control over the straits, Turkey desperately sought help from America. After Turkey joined NATO in 1952, a relationship similar to the Anglo-Ottoman partnership developed.

Notwithstanding differences of setting, the backgrounds of the Anglo-Ottoman and American-Turkish partnerships are so alike that one may consider the latter as a continuation of the former. We can evaluate the current alliance fatigue and future of U.S.-Turkey relations by comparing them with those of the Anglo-Ottoman partnership. Five commonalities come into relief: selling the partnership, enduring cultural differences, becoming regional rivals, asymmetric relations and unsolicited domestic interventions.

BOTH THE Anglo-Ottoman and Turkish-American relationships succumbed to alliance fatigue. Each party had difficulty selling the merits of the partnership to the public. This was partly due to specific political events, but also because of enduring cultural differences previously ignored for the sake of sustaining the strategic alliances.

British statesmen who hoped to establish an alliance with the Ottoman Empire were unable to change negative public perceptions of it by the turn of the nineteenth century. When the House of Commons debated supporting the Ottoman Empire against Russia in 1791, Edmund Burke objected. He intensely disliked “this anti-crusade” and opposed “favoring such barbarians.” This impression hardly changed during the Greek War of Independence (1821–29), in which the Ottomans allegedly oppressed defenseless Christians.

After 1839, though, positive press coverage made it easier to sell the benefits of an Anglo-Ottoman partnership. The implementation of the tanzimat, the Ottoman Empire’s grand reorganization program, allowed British public intellectuals to portray reformist Ottomans as genuinely liberal and amenable to Westernization, in contrast to absolutist powers such as Russia. By the end of the Crimean War, the Ottomans had become staunch allies in defending the liberal cause and often followed British counsel. For example, Sultan Abdülmecid (r. 1839–61) granted equality in all respects to his non-Muslim subjects in 1856, at the behest of Britain. Nationalists who defended extensive autonomy or separatism gradually gained the upper hand in non-Muslim Ottoman communities that viewed this measure to be “too little, too late.” This consequently led to a long-term struggle between the Ottoman center and its non-Muslim communities.

In reality, Ottoman reformist statesmen were liberal only insofar as the territorial integrity of their empire was not challenged. When liberal policies threatened to dismantle the empire into the États Désunis de Turquie, as Fuad Pasha sarcastically remarked, the Ottomans had to draw a red line. Heavy-handed Ottoman repression in Bosnia-Herzegovina and Bulgaria in 1875–76 tarnished the positive perception the Crimean era had yielded. The British public’s outcry against Istanbul’s treatment of Ottoman Christians influenced British policymakers. At the Constantinople Conference of 1876, Lord Salisbury worked with Count Nikolay Pavlovich Ignatyev of Russia and incensed Ottoman statesmen by demanding extensive reforms favoring Ottoman Christians.

Thereafter, Britain cold-bloodedly watched the Russians defeat the Ottomans in 1877–78. Though the British could have aided the Ottomans, they refrained as their public had low esteem for the “bloodthirsty Muslim tyrants.” After signing the Treaty of Berlin in 1878, which established the autonomous Principality of Bulgaria, Britain continued pressuring the Ottomans to adopt reforms supporting the Macedonian Christians and Armenians. Abdülhamid II (r. 1876–1909), the new Ottoman sultan—who assumed the mantle of caliph, the ostensible leader of all Sunni Muslims—responded by initiating a policy of pan-Islamism, which threatened the British in their heavily Muslim colonies, particularly India and Egypt. This was mostly an empty threat, but the British eagerly bought in. They once again made the Ottomans the illiberal “other.”

By the 1900s, the Ottoman public was convinced that Britain had a hidden agenda of establishing an Armenian kingdom and separating Macedonia from the empire. For their part, the British public spotted an Ottoman specter behind the intensified Islamist sentiments in Egypt, India and other parts of its empire. The diminishing Russian threat paved the way for the Anglo-Russian entente of 1907, a diplomatic revolution. This practically marked the end of cooperation between London and Istanbul, though neither party officially pronounced it “dead.” Rather, they acted like friends for seven more years, despite holding different opinions on several issues and experiencing acute alliance fatigue.

After its establishment, the Republic of Turkey formed an autocratic single-party system based on a cult of personality centered on Mustafa Kemal Atatürk. In the wake of World War II, however, this regime became antithetical to a new “free world” order led by the United States. Turkey then quickly switched to a multiparty system, becoming the “easternmost bastion of Western democracy.” Turkey earned this title when it joined NATO in 1952. It had dispatched a brigade to Korea, the third-largest United Nations military unit after the United States and Great Britain. As a formal U.S. ally, President Dwight D. Eisenhower declared, “No doubt the strongest and most reliable protector of the European civilization is the Turkish Army.”

Eisenhower’s lofty words belied the reality of the U.S.-Turkey relationship. Because the American public showed little interest in Turkey during the early decades of the Cold War, Washington was able to turn a blind eye to the shortcomings of Turkish democracy. In fact, American policymakers viewed the Turks as “Finns with mountains,” as Time magazine introduced them to the American public. This image portrayed Turkey as a secular Muslim state with a burgeoning democracy in an unstable region. Turkey’s recognition of Israel in 1949—which made it the first predominantly Muslim state to do so—only bolstered this perception. As long as Turkey supported American regional interests, Washington overlooked human-rights abuses, including Ankara’s heavy-handed suppression of left-wing movements. The Cyprus crisis between Turkey and Greece caused more headaches in Washington than the coups staged by the Turkish military.