America's Comprehensive Test Ban Treaty Is Too Valuable to ‘Unsign’ 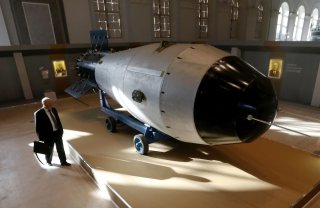 Last week, the State Department caused a stir raising suspicions the Chinese were violating the Comprehensive Test Ban Treaty (CTBT). Almost immediately, at least one senator repeated an earlier request he and three others made to President Donald Trump to “unsign” the CTBT. This was music to the ears of nuclear weapons advocates, who have long insisted the United States should resume nuclear testing, the news was anathema to CTBT ratification advocates.

Unfortunately, both groups are now driving the debate but neither’s advice should be heeded. Why? The United States can’t fully verify small nuclear test violations and should not ratify the treaty until it can but, for the same reason, it shouldn’t unsign the treaty until it has clear proofs that it can publicly share. As for resuming testing, it would only further slow the U.S. nuclear arsenal’s modernization and increase its already sky-high cost.

There is something here to irk everyone.

Certainly, unsigning the CTBT would be a mistake. It is fair enough to insist that ratifying the treaty should wait until the United States can reliably detect small nuclear tests. Even CTBT ratification advocates admit that tests below a certain yield are unlikely to be identified. Their concern, however, is that jettisoning the CTBT on suspicions of a possible violation would be reckless. As they point out, The director of the U.S. Defense Intelligence Agency and the State Department only argue that China and Russia may not be adhering to the CTBT. Why are our officials so conditional? Because very small nuclear explosions are easy to muffle or “decouple” and can be rendered all but imperceptible to remote seismic sensors. The test ban violations intelligence that our officials have suggests—but doesn’t yet prove—Chinese or Russian cheating.

This, in turn, supports two opposed policy conclusions. First, as long as violations of this sort can’t be clearly proven and weapons designers believe such tests are of military value, it would be politically risky to push for CTBT ratification. Second, until U.S. officials can publicly prove such violations, it would be just as dicey to “unsign” the treaty.

Why would it be dicey? Well, unsigning the treaty would unplug much of America’s credibility to complain about suspected violations. This would be true in general and specifically at the Comprehensive Nuclear-Test-Ban Treaty Organization in Vienna, which the United States supports by providing 20 percent of its funding. That money goes toward helping the organization detect treaty violations. Certainly, if combined with America’s resumption of nuclear testing, disowning the CTBT would only lower the diplomatic bar for China, Russia, and others to test to their hearts’ content.

But wouldn’t it help speed up America’s nuclear arsenal’s modernization? No, actually just the reverse.

From 1945 to 1992, the United States tested 1,054 weapons. This was all part of its weapons labs “cut and try” method: A nuclear device was designed, built, and then tested to discover if it could achieve specific design objectives. With test failures, more testing was required to find out why there were failures.

When the United States stopped testing in 1992, it used the data it acquired (the United States has tested more times than all of the world’s other nuclear states’ combined) to develop a new approach—Uncertainty-Quantified, High-Performance Computing. This data-driven engineering design approach was designed to defeat the worst combination of design stresses our past nuclear test experience had exposed.

Does that seem risky? Not really. Consider bridges. Those bridges don’t get tested until after they collapse. Instead, contractors build in safety margins from what they already learned from previous bridge failures. Thus, this dialing-in of past experience is an excellent way to train up new, smarter bridge builders. Full-scale testing begins the day the bridge opens.

This is what the United States is doing to maintain and upgrade its nuclear weapons today. It saves money. It saves time. Plus, reverting to the cut-and-try method—nuclear testing—in contrast, literally and figuratively costs a bomb. Bruce Goodwin, one of the world’s leading nuclear weapons designers at Livermore National Laboratory notes that: a crude test of marginal technical value could be executed in about six months but a “complex test” would “take a year or more.”

Then there’s the cost.

“One of the last nuclear tests prepared but not fired,” Goodwin explained by email, “had a marginal, sunk cost of approximately $100,000,000. Dial in 28 years of inflation and that figure nearly doubles. Factor in having to start from zero and moving to digital technology, and Goodwin figures the costs would rise even further. Then there’s our government’s flair for cost overruns in restoring nuclear weapons capabilities. Goodwin figures the “real cost will be much higher” (grab your wallet) and that’s just for one.

Bottom line: Resuming testing is for chumps; unsigning or ratifying the CTBT is for the flamboyant. For now, steering clear of all three is America’s best course.

Henry Sokolski is executive director of the Nonproliferation Policy Education Center in Arlington, Virginia, and the author of Underestimated: Our Not So Peaceful Nuclear Future (second edition 2019). He served as deputy for nonproliferation policy in the Cheney Pentagon.