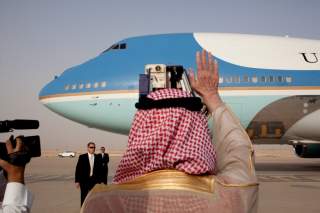 RECENT PRESIDENTS of both parties have agreed that the United States has vital interests in the Middle East. But the region has become extraordinarily turbulent. Civil wars rage in Syria, Yemen, Iraq and Libya, where central authority and state structures have broken apart. Various regional powers are intervening in these wars, many of which serve as proxy contests between Iran and Saudi Arabia. America is fighting a war against ISIS in Iraq, Syria and, increasingly, Libya. Russia has intervened in the Syrian Civil War.

The chaos convulsing the Middle East concerns the United States but is deeply rooted in local factors—in the failure of Arab governance, regional rivalries, and sectarianism and identity politics run amok. Alas, the last fifteen years have demonstrated the limited ability of the United States to bend these historical forces to achieve its preferred outcomes of peace, prosperity, security and better governance in the region.

Confronted with this clear mismatch between American aspirations and capabilities, some experts are calling for a partial U.S. disengagement from the region, while others want to double down on existing U.S. commitments. Most agree that nonmilitary tools of statecraft are important to protecting American interests and that the United States should continue to use them to address the political, economic and social drivers of instability. The main fault line in this debate focuses heavily on the role of military force in U.S. strategy for the region.

One school of thought contends that America’s credibility and reliability have suffered as a result of the Obama administration’s weak and indecisive leadership and its risk-averse policies, in particular its caution in employing U.S. military force. Members of this camp call for more interventionist U.S. policies and greater reliance on force: destroy the Islamic State in Iraq and Syria; bolster the opposition to the Assad regime by establishing a no-fly zone under U.S. military protection; more aggressively challenge Iranian adventurism.

A second camp argues that the United States can better protect its core interests by pursuing less ambitious goals in the region and minimizing the role of U.S. military power. In light of the nature of the problems, the limits on American power and resources, the costs and risks of large-scale military operations, and competing global priorities, advocates of this view argue that the United States should manage threats to core U.S. interests in the Middle East rather than try to solve intractable local problems.

Against the backdrop of these debates, we address the following questions: How well are America’s core interests in the Middle East being safeguarded? Would the United States be able to protect these interests if it assumed a more minimalist military presence in the region and, in general, more limited involvement? We conclude that, despite the intervention of other outside powers, the humanitarian disasters pouring out of Syria and the instability in the region, the most important U.S. interests are well protected. Given the high costs of a U.S. military presence in the region, we argue for a strategy of “minimum essential U.S. engagement.”

WHAT CONSTITUTES America’s core interests in the Middle East, and are they currently at risk? Are an increased military presence and more liberal use of military force necessary to protect and advance these interests? Republican and Democratic administrations have broadly delineated U.S. core interests in the Middle East, and with a fair amount of consistency. In his September 2013 speech to the UN General Assembly, President Obama described them as: confronting external aggression against U.S. allies and partners; maintaining a free flow of energy; dismantling terrorist networks that threaten the American people; and preventing the development or use of weapons of mass destruction.

Experts argue, of course, that these are not the correct interests—that they either understate or overstate the degree of U.S. concern with the region or fail to account for the domestic U.S. political context in which U.S. policy toward the region is formulated. To be sure, domestic politics make the quest for a consistent, interest-based policy somewhat quixotic. But the important question is whether core interests are being satisfied and to project into the future what needs to be done to protect them. If these are not the correct interests then that case should be made to U.S. leaders and the American public directly. Advocating policies that entail increased risks and greater resources than necessary to protect an undeclared interest only adds to conceptual confusion.

Many experts and some government officials believe that spreading democracy and protecting human rights are core U.S. interests in the Middle East. But U.S. leaders have only asserted these interests inconsistently. President Obama has said that the defense of human rights is a secondary interest that should only be protected with U.S. military force in partnership with other countries, if the costs and risks of intervention are low and the mission is feasible. Moreover, because it is not a core interest it should not drive force planning.

With these distinctions in mind, we analyze each of the four core interests the president outlined. The main challenges facing the Middle East are the rise of ISIS; the civil wars in Syria, Iraq, Yemen and Libya; terrorism in Egypt; and Iran’s aggressive posture that threatens Israel and stokes Sunni extremism. All are serious threats to internal and regional order, but they do not constitute threats of external aggression. To the contrary, they all stem from problems of domestic governance—even the threat of Iranian subversion—and all require solutions that attack that root problem.

The distinction is important because U.S. interests, as articulated by the president, do not require solving internal governance problems. In fact, significant U.S. military involvement in any of these situations could make them worse. U.S. military forces in the Middle East have proven effective at defeating external aggression, overthrowing regimes and confronting organized military forces. They have not been effective at addressing or even improving domestic governance problems. Indeed, a large and long-term U.S. military presence encourages America’s local partners to misbehave, motivates extremists’ efforts to attack U.S. interests and undermines the legitimacy of the people most favorably disposed toward the United States.

THE UNITED STATES has, informally, committed to protecting two sets of regional partners from external aggression: Israel and the Gulf states. (The United States also has a NATO treaty commitment to defend Turkey, but Turkey is widely considered able to defend itself and in any case its defense is not part of the U.S. domestic debate.)

Israel currently enjoys unprecedented security from external aggression by Arab states. The risk of a new Arab-Israeli war has all but disappeared, and the United States should continue U.S. military assistance at current levels to help ensure that Israel maintains its vast qualitative military edge over other Arab countries. Hezbollah poses a potential threat but it has been largely contained. It is hemorrhaging money and men in Syria and a resumption of the missile war with Israel would undermine its domestic political standing in Lebanon while unleashing a ferocious Israeli response against its military assets. In any case, Israel is capable of handling any resumption of Hezbollah missile attacks without U.S. help. Iran has no incentive to attack Israel with conventional military force and lacks the capacity for anything beyond limited and inaccurate missile attacks.

Iran does not now and will not soon pose a serious threat of conventional attack against the Saudis or its Gulf state partners. The Gulf Cooperation Council (GCC) enjoys overwhelming conventional military superiority over Iran. Although Iran may increase defense spending now that it has gained partial relief from sanctions, it will remain far behind the GCC states in conventional military capabilities. U.S. security assurances to the GCC and the continued supply of advanced U.S. weapons and equipment will deter Tehran from large-scale, overt attacks. The Iranians pose a much greater threat of asymmetrical warfare, including cyber and missile attacks against energy-related targets and other critical infrastructure. But a large peacetime U.S. military presence in the Gulf, on land or at sea, is neither necessary nor helpful for deterring these hybrid threats.

Some might argue that ISIS has recently become an external threat to Israel and the Gulf states. ISIS and similar organizations do pose yet another threat of domestic subversion and terrorism directed at the GCC states. But with numerous enemies and relative conventional weakness, they have little capacity to externally threaten either the GCC states or Israel. Moreover, ameliorating the internal conditions that give rise to Islamic extremism in countries like Saudi Arabia offers the best protection against terrorist attacks by ISIS.

THE NEED to maintain a free flow of oil from the Persian Gulf prompted the United States to expand its military presence in the region in the 1970s and again in the 1990s. And even though the GCC’s share of world oil production is decreasing—as the United States taps into vast new energy sources—oil production in the Gulf still accounts for more than 25 percent of world output and continues to have an enormous impact on global oil prices. Maintaining a stable oil price still clearly requires the free flow of oil from the Persian Gulf, regardless of U.S. oil production. Indeed, 20 percent of the oil traded worldwide passes through the Strait of Hormuz.