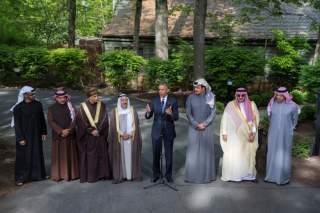 Though the United States has previously sided against the Iranian-backed Assad, its commitment to fighting him has not been particularly strong. Focusing its efforts to conducting airstrikes and training rebels to fight the self-proclaimed Islamic State (a fight that is somewhat, though not entirely, separate from the proxy war between the Gulf and Iran), the United States has become relatively disengaged from the fight against the regime. As noted, it has supported the Saudi campaign in Yemen, but seems to have done so reluctantly. Given this distance, the historical relationship with Saudi Arabia, and with recent (though tentative) advances in its relationship with Iran, the United States is in a unique position to create conditions for a mediated settlement. To do that, however, it is faced with a choice: it can allow its current relationships—ones that form an anti-Iranian axis but do not facilitate stability in the region—to continue uninterrupted on their own inertia, or it can demonstrate that it is willing to pursue an enhanced relationship with Iran and a balance between competing actors in the region. The United States should choose the latter. Without a vision for the Middle East that is both broad and nuanced, pursuing isolated solutions in Syria or other subconflicts of the larger fight will be meaningless.