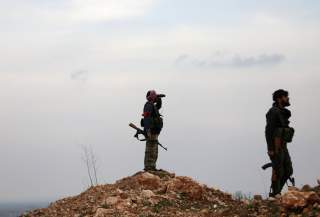 American prevarication in the Afrin conflict has led to a crisis in Syria. The United States now risks the worst of both worlds, as it tries to balance its policy in Syria between support for its anti-ISIS partners in eastern Syria and its longtime Turkish ally. In attempts to hedge between the two, policymakers have given mixed signals to both. This has resulted in the mostly Kurdish Syrian Democratic Forces (SDF) losing confidence in the United States, and in encouraging Ankara’s openly hostile remarks against U.S. policy and interests. As Washington’s policy weakens and seems uncertain, Russia and the regime in Damascus have gotten exactly what they wanted. Turkey, Syria and Russia saw the conflict in Afrin as a symbol, and each has closely watched for Washington’s next move as the Turkish offensive has unfolded since January 20. Now, as the conflict appears to wind down, the United States needs to shore up its allies and partners.

Turkey began planning its operation against the Kurdish People’s Protection Units (YPG) in Afrin months ago, in 2017. Afrin is a mountainous region located in northwestern Syria and is mostly populated by Kurds. It was at peace over the years of Syrian conflict, but Turkey claimed that Kurdish forces partnered with the United States wanted to link up with Afrin from eastern Syria. From Manbij, which the SDF controls, Afrin is only eighty miles to the west. The YPG is part of the SDF, but Turkey sees the YPG as connected to the Kurdistan Workers Party (PKK), which it views as terrorists. “We will not leave the separatist organization in peace in both Iraq and Syria,” Turkish president Recep Tayyip Erdoğan said in August 2017. He said Turkey would “drain the swamp.” As Turkish armored columns and artillery were positioned near Afrin in January, Ankara watched Washington’s moves carefully. On January 17, three days before the operation, Turkish media highlighted that the U.S.-led coalition had said Afrin was not part of the coalition’s operational area. Turkey’s Chief of Staff Hulusi Akar and National Intelligence Organization head Hakan Fidan flew to Moscow the same day to meet the Russian defense minister, Sergei Shoigu.

Turkey closely coordinated its Afrin operation with Moscow because it wanted to assure that Syrian air defense would not be operational. Through all this the United States was silent, even as leaders in the Kurdish YPG reached out to their American contacts, according to sources I spoke with. Four days after the offensive began, U.S. president Donald Trump spoke with Erdoğan. Trump urged Turkey to “deescalate” and “limit” its operations. He also warned of any actions that “might risk conflict between Turkish and American forces.” These were tough words for what the United States affirms is a NATO ally. But Washington has sought to play a “good-cop, bad-cop” routine with Ankara. National Security Advisor H. R. McMaster spoke to Ibrahim Kalin, Erdoğan’s spokesman, two days after the Trump call, on January 26. Turkey claimed that “it was emphasized that Turkey’s legitimate security concerns must be paid attention to. It was agreed that close coordination would be carried out in order to avoid misunderstandings.”

Since January, the United States has abdicated responsibility in Afrin. After voicing initial concerns, Washington has done nothing publicly to restrain Ankara. On March 11, Turkish forces were within a mile of the city of Afrin. Kurds warn of a humanitarian disaster. There is silence, meanwhile, in Moscow and Damascus about the crisis. Damascus has used the last months to increase its attacks on eastern Ghouta near Damascus and consolidate gains near Idlib. Because Turkey has been using Syrian rebel forces against the Kurds in Afrin, Damascus has rightly read that the Syrian rebels are now distracted. It has exploited U.S. confusion over the Afrin crisis to its benefit.

Russia has also exploited the Afrin crisis to grow closer to Ankara. Russia’s TASS news agency reports daily on Turkish-Russia cooperation. On March 11, Agriculture Minister Alexander Tkachev boasted of exports to Turkey, saying that mutual trade last year had grown to $2.8 billion. Russia is also finalizing its S-400 deal with Turkey, which it says it will implement in 2020. Turkey has also dismissed NATO concerns about this deal and the growing Moscow-Ankara détente. Berat Çonkar, a parliamentarian from Erdoğan’s AKP party, was quoted in Russian media as saying the current situation is not at “variance” with NATO’s security policy. NATO has quietly supported Turkey’s Afrin operation under the notion that Turkey has a right to defend its security. But Erdoğan has been harshly critical of NATO. On March 10, he asked “where are you?” citing Turkish claims that NATO was not lending enough support. It is one of many recent comments he has made attacking the West, the United States and Turkish allies.

It appears that Turkey will take most of Afrin, and that the Syrian regime has decided not to draw a red line. The United Nations has been relatively silent. The United States officially supports a cease-fire, but it knows it cannot enforce one. Kurds in Syria now are marked by a feeling of betrayal. They have taken to Twitter to accuse both the United States and Russia of selling them out after years fighting against ISIS. “We were fighting ISIS to protect not just Kurdish people, but people all over the world . . . now in Jandaris City, [they] have to hide and living underground from Turkish jets,” a freelance reporter named Gabriel Chaim reported. Jandaris fell to the Turkish army several days later.

The United States risks a rift with its SDF partners now over Afrin. The SDF sent fighters to bolster Kurdish defenses in Afrin. Washington also paused some operations against ISIS in eastern Syria. The U.S. government has stressed since January that Afrin would distract from the war on ISIS, and that it would not help regional stability. However, Turkey has not heeded Washington’s warnings.

It now appears that Washington has lost influence in Ankara, because Turkey knows the United States is not serious about putting the brakes on what is happening in Afrin. This could lead to further Turkish clashes with U.S.-backed forces in Manbij. The Afrin operation has also driven the Kurds closer to the Syrian regime. They have needed Syrian regime territory to transfer support to Afrin, and some pro-regime fighters came to Afrin to support them. Russia saw Afrin as an opportunity to also weaken confidence in the United States, which it sees as a potential way to curry favor for the regime in the east. In early February, pro-regime units clashed with U.S. and SDF forces near Deir al-Zour. Russian military contractors were reported killed. The regime’s attempt to grab oil fields near Deir al-Zour and test the United States should be seen in the context of Afrin. It also thinks the United States is distracted.

The United States now faces a crisis of confidence in Syria. Its policy, which seemed to be going well in the fall of 2017 as anti-ISIS operations moved to stabilization, is now compromised. Plans to increase diplomatic personnel and increase aid, to remove IEDs and train security forces, are now unclear. Turkey, Russia, the Syrian regime and Iran all want Washington to close up shop in Syria.

The Afrin operation was likely a test run for what comes next. The only support the United States seems to have now in eastern Syria is Saudi Arabia, whose Crown Prince Mohammed bin Salman recently condemned Turkey in light of Ankara’s support for Qatar. But Riyadh’s support is not enough to restore confidence in U.S. policy in eastern Syria. Washington needs to step up to work with its partners who fought ISIS for years at its side.

Seth J. Frantzman is a Jerusalem-based journalism who holds a PhD from the Hebrew University of Jerusalem. He is the executive director of the Middle East Center for Reporting and Analysis and a writing fellow at Middle East Forum. Follow him on Twitter @sfrantzman.
Image: Turkish-backed Free Syrian Army fighters are seen in Maryamayn in eastern Afrin, Syria March 11, 2018. REUTERS/Khalil Ashawi