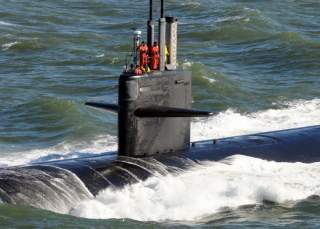 U.S. defense strategy depends in large part on America’s advantage in undersea warfare. Multiple Quadrennial Defense Reviews, National Military Strategies, and Congressional hearing statements highlight how quiet submarines, in particular, are one of the American military’s most viable means of gathering intelligence and projecting power in the face of mounting anti-access and area denial (A2/AD) threats being fielded by a growing number of countries.

America’s superiority in undersea warfare results from decades of research and development (R&D), operations, and training. It is, however, far from assured. U.S. submarines are the world’s quietest, but new detection techniques are emerging that don’t rely on the noise a submarine makes, and may make traditional manned submarine operations far more risky in the future. America’s competitors are likely pursuing these technologies even while expanding their own undersea forces. To affordably sustain its undersea advantage well into this century, the U.S. Navy must accelerate innovation in undersea warfare by reconsidering the role of manned submarines and exploiting emerging technologies to field a new “family of undersea systems.”

Evolution of the Undersea Competition

Mining and mine-clearing have been around for centuries, but undersea warfare first emerged as a significant area of military operations in World War I, when several countries used submarines on a large scale to attack civilian shipping and, occasionally, enemy warships. This created the need for anti-submarine warfare (ASW) and began a competition between submarines and ASW forces. During the ensuing century this competition evolved through several distinct phases, each characterized by the predominant ASW detection method.

In both world wars, the submarine vs. ASW competition largely played out above the water, through radio and radar transmissions in the electromagnetic (EM) spectrum. Submarines needed to be “cued” or directed toward convoys by radio communications, which could be intercepted by ASW forces. Submarines were also vulnerable to visual and radar detection because they operated on the surface most of the time and could only submerge for 1-2 days at a time.

Despite these vulnerabilities, ASW forces in both world wars were unable to sink a significant number of submarines until late in each conflict. Shipping losses to submarines, however, decreased shortly after dedicated ASW efforts began. Instead of eliminating submarines, ASW efforts reduced their effectiveness by slowing their deployment to patrol areas, preventing them from getting into firing position, and disrupting the coordination of their attacks. This ASW approach exploited the inherent disadvantages of submarines: they are relatively slow, lack self-defense systems, and cannot rapidly assess the effectiveness of an incoming attack. As a result, even unsuccessful ASW attacks often compelled a submarine to evade and lose the initiative or made it more detectable for ASW re-attacks.

The EM-based undersea competition effectively ended with the introduction of snorkel-equipped submarines and, later, nuclear submarines. Both remained submerged most of the time, making them nearly impossible to find with radar. But during early exercises with nuclear submarines the U.S. Navy realized the new boats had an unexpected vulnerability–they generated continuous noise from their nuclear and steam plant machinery. This sound could be detected at long range with the passive sonars the Navy developed to try and find diesel submarines. Thus began a new competition between submarines and ASW forces based on passive sonar.

The U.S. Navy exploited its “first mover” advantage in passive sonar by starting a methodical sound-silencing program for its nuclear submarines and establishing the passive Sound Surveillance System (SOSUS) network off the U.S. coast and at key chokepoints between the Soviet Union and open ocean. These efforts enabled an operating concept from the early 1960s to the late 1970s in which U.S. ASW forces would trail–and be prepared to attack–Soviet nuclear submarines throughout their deployment.

The U.S. silencing advantage began to erode in the mid-1970s after the Soviet Union learned of their submarines’ acoustic vulnerability from the John Walker-led spy ring and obtained technology for submarine quieting from a variety of sources. In response the U.S. Navy implemented a new ASW approach in the 1980s that focused on reducing Soviet submarine effectiveness. U.S. nuclear-powered attack submarines (SSNs) deployed to waters near Russia where Soviet ballistic missile submarines (SSBN) operated (also known as “bastions”). This operating pattern induced the Soviets to keep their best SSNs in the bastions to protect SSBNs, rather than deploying them overseas against U.S. naval forces.

This new approach, however, was also unsustainable. If the Soviet Union deployed dozens of their own quiet SSNs they would be able to both protect their SSBNs in the bastions and overwhelm U.S. ASW forces overseas. Consequently the Navy found itself having to shift away from passive sonar to a new basis for the competition. But as with the Germans in World War II, the Cold War ended before the Soviets could exploit the opportunity.

The rise of technologically advanced competitors such as China and a resurgent Russia may begin a new chapter in the undersea competition. Technological advancements, many of them driven by ongoing advances in computer processing power (or “big data”), will influence this next phase in undersea warfare in three main areas:

New technology is also likely to mitigate the limited endurance of non-nuclear undersea platforms. This could enable unmanned underwater vehicles (UUVs) to pick up some missions such as covert coastal surveillance and mining that previously required a manned submarine. Advances in battery and fuel cell technology are expected to enable non-nuclear submarines, UUVs and other undersea systems to operate for months submerged and power a growing number of sensors and other payloads. For example, the newest Japanese Soryu-class submarines will use lithium-ion batteries instead of air-independent engines for power when submerged.

The same improvements that are making submarine detection easier will also likely enable a new generation of sophisticated counter-detection technologies and techniques. Against passive sonar a submarine or UUV could emit sound to overcome its own radiated noise using a technique similar to that used in noise cancelling headphones. Against active sonars, undersea platforms could–by themselves or in concert with UUVs and stationary or floating systems–conduct acoustic jamming similar to that done by electronic warfare systems against radar.

The ability of large UUVs and submarines to conduct and coordinate operations will improve with the introduction of new weapon, sensor, and communication systems. For example, the U.S. Navy is fielding the compact very lightweight torpedo (CVLWT), which is less than a third the size of the smallest torpedo it currently operates. Although the CVLWT has a short range, large UUVs could carry it as an offensive weapon and exploit their small size and signature to maneuver the torpedo close to a target. Similarly, small UAVs such as the Navy’s Experimental Fuel Cell (XFC) UAV have relatively short endurance but can be launched by submarines or UUVs close to adversary coasts. They can take advantage of continued miniaturization in electro-optical, infrared and radar sensors to conduct surveillance or electronic warfare missions.

Communications are a longstanding vulnerability of undersea platforms. In past eras, submarines transmitting over operationally relevant distances risked forfeiting their greatest strength–their stealth. New or improved undersea communication methods will likely enable undersea platforms to communicate with each other, systems on the ocean floor, and the larger joint force while remaining deep underwater. Acoustic communications are increasingly able to operate over operationally relevant distances, while at shorter ranges LEDs and lasers could provide greater bandwidth. And new floating or towed radio transceivers enable submerged platforms to communicate with forces above the surface without risking detection.

The Next Chapter in Undersea Competition

While undersea research and development has been a distinct U.S. military advantage since the end of World War II, commercial and scientific interest in offshore resources is driving undersea knowledge and expertise increasingly toward the commercial and scientific sectors. This could make sophisticated undersea technology widely available, enabling both rival military and non-state forces to acquire advanced undersea sensors and unmanned vehicles. Consequently, the last 25 years of unrivalled U.S. undersea dominance may be coming to an end unless U.S. forces adapt to the changing undersea operating environment. A new approach to undersea warfare should include the following: