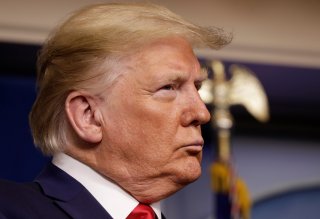 Without question, the federal government has an important role in responding to major national emergencies such as the novel coronavirus pandemic. But its response should be specific and short-term. And it shouldn’t push us still further into debt.

Congress and the administration must stay focused on responding directly to the public health crisis, in a timely, targeted, and transparent manner, and without teeing up a public debt crisis in the process.

It won’t be easy. Congress and President Trump are resorting to emergency fiscal measures, such as authorizing additional federal funding to support states in responding to the public health crisis, to keep employees attached to their employers while buffering both from undue economic hardship, and to provide temporary tax relief to affected business and individuals suffering from disruptions in cash flow. Amid all this activity, lawmakers should act with both resolve and prudence.

The nation’s fiscal outlook was looking very dangerous prior to the coronavirus pandemic. Unless Congress acts to reform what’s driving this growing spending, the resulting economic decline, as well as legislative fiscal measures to mitigate the economic damage, will heighten the risks of a public debt crisis..

The gross national debt already exceeds the size of the U.S. economy at $23.5 trillion, and Congressional Budget Office projections, released prior to the coronavirus pandemic, anticipated annual deficits well in excess of $1 trillion for the foreseeable future. Deficits were already projected to grow rapidly at a pace that exceeds economic growth—a scenario that is highly unsustainable if we allow it to go on for too long.

Fast forward to today, and the nation finds itself in the midst of a public health crisis with governors across the country taking previously unfathomable measures to reduce the rate of transmission of the novel coronavirus. This includes shutting down many businesses deemed “non-essential,” potentially triggering a devastating wave of layoffs and bankruptcies with repercussions that could last well beyond the national emergency itself.

The federal government’s response thus far has been robust and reasonably focused on temporary and targeted measures that address the public health crisis and its most devastating economic repercussions, directly.

First, Congress appropriated $8.3 billion through the Coronavirus Preparedness and Response Supplemental Appropriations Act to address the needs of public health officials for additional resources and to expand the availability of small business disaster loan assistance.

A third legislative package could increase the deficit by as much as $2 trillion—effectively tripling the federal deficit—depending on the details that lawmakers adopt once both parties are able to reach agreement.

Fiscal watchdogs, including this author, have warned lawmakers not to drive up deficits in cavalier-fashion during economically strong times because acting irresponsibly would set the government up for being less able to respond to an unexpected crisis and could accelerate the threat of a public debt crisis.

Alas, here we are.

As Congress and the administration continue to respond to the imminent public health threat they must balance the conflicting needs of emergency responsiveness, fiscal responsibility, and economic vitality.

Any response must be timely, targeted and temporary, avoiding irresponsible and unnecessary increases in the federal debt from opportunist carve-outs for politically connected special interests and unrelated policies looking to hitch a ride.

Once the country has contained the broader public health threat, lawmakers must begin the critical work of reforming the key drivers of growing spending to avoid a public debt crisis and to ensure the federal government is on a sustainable fiscal footing so we’re better prepared to respond to major crises in the future.

Both the demands of the present moment and our responsibility toward younger and future generations depend on prudent action by federal legislators today. Failing to prepare is preparing to fail.

Romina Boccia is the director of the Grover M. Hermann Center for the Federal Budget at The Heritage Foundation (heritage.org).