America's Economic Future Hinges on Its Partnership with Asia 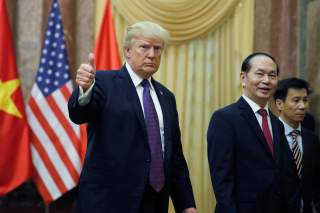 Nearly a year into Donald Trump’s presidency, his administration has started to craft a strategic narrative for its approach to Asia. This is atypical: it took Barack Obama nearly three years to unveil his “rebalance” to the region. George W. Bush succeeded in advancing U.S. relations in Asia arguably despite never articulating an explicit narrative.

The administration’s instinct here is the right one. Given regional questions about U.S. staying power, the administration’s economic philosophy, and American will to exert leadership, it would certainly help to articulate an overarching vision for how Washington sees Asia and America’s role there. In its absence, as the North Korean threat and bilateral trade deficits absorb the president’s public focus, these two issues alone could easily emerge as America’s de facto narrative in Asia.

Yet establishing such a new Asia narrative—as sketched out by Trump’s inaugural trip to the region and in his new National Security Strategy—remains a work in progress. The administration’s emphasis on military strength is relatively clear, and will resonate with U.S. allies and partners in Asia. But the economic elements of its emerging narrative remain inadequate, and its focus on competition with China has merit but does not on its own suffice. America’s engagement with Asia should be predicated on more than zero-sum competition and economic nationalism.

Today, countries across the region are today making bets about the future contours of their geopolitical environment. A positive, holistic American narrative would influence decisions across Asia, and serve U.S. interests in the bargain. And it would counter other narratives—such as an inevitably dominant China, a distracted Washington and a more anarchic region—that will ultimately be less hospitable to U.S. interests.

Looking backward, President Obama presided over a mix of successes and failures in Asia, but his administration settled on a compelling overall narrative of American engagement. Encompassing a series of high-profile diplomatic, economic and military initiatives, the Obama narrative enabled senior U.S. leaders to clearly convey enduring American commitment to the world’s most dynamic region.

The vaunted “rebalance” to Asia brought together several strands of effort. Diplomatically, Obama pledged a shift in U.S. attention and resources from the Middle East to the Asia-Pacific region, and regular participation in key regional forums like the East Asia Summit. Economically, U.S. aspirations to conclude the geographically sweeping Trans-Pacific Partnership trade agreement provided a clear indicator of American commitment to deepen commercial linkages. Militarily, the unveiling of the Pentagon’s Air-Sea Battle Concept and the subsequent rollout of the Third Offset Strategy underscored U.S. intent to maintain a military advantage in the Asia-Pacific region over any potential rival.

The Obama administration’s narrative signaled long term intent, functioned as a source of reassurance for U.S. allies and partners, and arguably placed a floor underneath policy failures such as Beijing’s successful construction and militarization of artificial island outposts in the South China Sea. It also demonstrated the pitfalls associated with an expansionary narrative; by promising to focus disproportionately on Asia, the administration raised unmet regional expectations of American activism and generated worries about abandonment in Europe and the Middle East.

President Trump’s inaugural trip to Asia in November, together with the release of the new U.S. National Security Strategy (NSS) in December, provide the clearest clues to his administration’s conceptual approach.

The most promising element of this emerging narrative is rhetorical emphasis on a “free and open Indo-Pacific.” This concept communicates a needed geographic expansion of U.S. Asia policy and could ultimately connect to a larger American vision of upholding the rules-based international order, one that has underpinned global prosperity, stability, and the expansion of democracy since the end of World War II. Yet on economic issues, during both the president’s trip to Asia and in the new NSS, the administration has remained firmly opposed to broad trade liberalization. This is hard to square with a vision of an “open” region stretching across two oceans.

The administration’s commitment to a “free” Indo-Pacific also remains uncertain. While in China, Vietnam and the Philippines, Trump refrained from publicly criticizing his hosts’ human-rights record. And though the new NSS calls for the United States to “offer encouragement to those struggling for human dignity in their societies,” in practice the administration has deprioritized the promotion of human rights.

The president’s trip to Asia included thinly veiled critiques of China’s mercantilist trade and investment practices. By contrast, the new NSS goes much further, stating that “China seeks to displace the United States in the Indo-Pacific region, expand the reaches of its state-driven economic model, and reorder the region in its favor.” This recognition is long overdue but incomplete. American allies and partners certainly worry about Chinese intentions, but they will be unwilling to oppose something with nothing. The region seeks a positive vision that links their cooperation with the United States to the support of a larger rules-based order, and to preserving a regional balance of power that will expand security, prosperity and freedom from north to south.

As a result, the opportunity to articulate a compelling Asia narrative remains. This should start with the embrace of a rules-based regional order, one that abjures a might-makes-right approach to resolving disputes, avoids exclusionary trading blocs, and permits the full flowering of strong and independent Asian democracies. Under the banner of a “free and open Indo-Pacific,” the administration should couple rhetorical support for a rules-based order with an explicit U.S. effort to promote a regional security network that will bolster it.

China’s rise, North Korea’s threats, and other security challenges will prove more tractable if other states across Asia are strong and working together. To that end, the Trump administration should announce an initiative to accelerate the growth of security ties among Asian states. This initiative would build on previous efforts by U.S. allies and partners to deepen relations with one another, and leverage preexisting configurations of like-minded states, including the revived U.S.-Japan-Australia-India “Quad.”

The administration should couple such a push with a broader diplomatic effort to set the agenda in key multilateral forums—APEC, the East Asia Summit and all the rest—moving well beyond the current focus on North Korea, and ensuring that Beijing does not simply fill the gap with its own approaches. And a key element of any diplomatic narrative for Asia must continue to be a clear articulation of American values. Support for democracy and human rights remains a comparative advantage for the United States, both attracting supporters and drawing a not-so-subtle distinction with our autocratic rivals.

On the economic front, the president’s withdrawal from the Trans-Pacific Partnership agreement, drive to renegotiate the Korea-U.S. free trade pact, and opposition to regional deals significantly limits the possible. Assuming the administration’s trade philosophy is unlikely to change in the near future, it will need to pursue other elements of an Asian economic agenda.

Connectivity, investment and innovation would serve as good candidates. The Trump administration should announce a dedicated U.S. effort to promote infrastructure across the Indo-Pacific region, in concert with allies and partners. It should launch a major regional investment initiative and, following last year’s Global Entrepreneurship Summit in India, commit to convening a new series of Indo-Pacific entrepreneurship workshops.

Then there is old-fashioned American military might. While allies welcome the emphasis within the NSS on retaining military superiority over any potential adversary, they remain focused on the immediate military balance in Asia and question how the United States can credibly sustain a decisive edge over China. Under the rubric of an “Indo-Asia-Pacific Stability Initiative” or some such moniker, the Trump administration should move to tangibly improve U.S. force posture and capability in Asia over a short time horizon. In parallel, it should translate the NSS imperatives into a new, high-profile Department of Defense initiative that will ensure the U.S. military develops the technologies and operational concepts necessary to maintain a favorable balance of power in Asia.

Together, these kinds of moves would fit a narrative of a United States devoted to stability, prosperity and democracy in Asia, free from external coercion or undue influence. They would suggest an America confident in its leadership and its desire to work with numerous partners toward a truly free and open Indo-Pacific region. They would leverage America’s historic commitment to the flowering of human freedom and an increase in economic prosperity. They would paint a picture of a region in which the United States is present and growing in commitment, irrespective of the distractions of other regions and its own domestic divisions.

To be sure, such a narrative is just a starting point. To be effective, it must be backed by sustained attention, resources and action. But determining what story America wishes to tell about its own role in Asia is the necessary first step.

Richard Fontaine is president of the Center for a New American Security (CNAS). Daniel Kliman is the senior fellow in the CNAS Asia-Pacific Security Program.