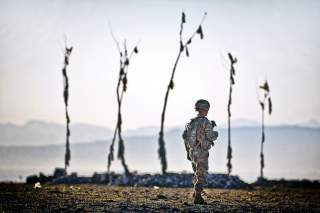 A new report on pervasive child sexual abuse among Afghan security personnel, prepared by the independent Special Inspector General for Afghanistan Reconstruction (SIGAR), is being suppressed by Pentagon officials. In its place, the Defense Department has issued a highly technical report, which laments procedural shortcomings but omits a full account of the systematic pederasty by Afghan officers that American forces have basically ignored for fifteen years.

“The results of SIGAR’s unreleased inquiry, which was requested by ninety-three members of Congress in 2015, remains classified at the Pentagon’s direction, raising questions about the military’s transparency and the extent to which it is complying with laws meant to curb such behavior,” according to the Washington Post.

Selling and using young boys (often dressed as girls) for sex—known colloquially as bacha bazi, or “boy play”—has deep roots in Afghanistan and has been widely practiced for generations. A State Department report in 2010 described the extent of the problem: “Child abuse was endemic throughout the country, based on cultural beliefs about child-rearing, and included general neglect, physical abuse, sexual abuse, abandonment, and confined forced labor to pay off family debts.” It also noted that “most child sexual abusers were not arrested.” American officers, who share quarters with Afghan ones, report boys screaming in agony, which they were instructed to ignore.

In 2010, I called on the Obama administration to acknowledge the problem and draw a clear moral line: “The president should inform our representatives in Afghanistan that although we shall continue to put up with much that we do not condone, there are limits to our accommodations. We shall neither finance nor protect a regime that refuses to act against large-scale sexual abuse of children.” I renewed this call in 2012 and 2016.

Formally, bacha bazi is illegal in Afghanistan. And, according to the State Department’s 2017 report on human trafficking, the Afghan government has recently started to pursue criminal cases against those involved in bacha bazi, including several Afghan soldiers and police officials; however—the majority of these few cases had their charges dropped. That’s partly because, the report notes, “most who engage in bacha baazi paid bribes to, or had relationships with, law enforcement, prosecutors, or judges that effectively exempted them from prosecution.” Exactly how widespread this problem is remains unknown, as scant data is available, which makes reports like SIGAR’s all the more crucial. It leaves no doubt that the vile practice is pervasive. American officials often argue that we sink blood and hundreds of billions of dollars into this Godforsaken country—“where empires go to die”—in order to foster human rights and democracy, not just to curb terrorism. It points with pride to the many girls who have been enrolled in schools since the United States ousted the Taliban. Nevertheless, it is widely acknowledged that Afghanistan is one of the most corrupt nations in the world, and produces about 90 percent of the world’s heroin. One should add to this list of troubling failures—the continued mass, institutionalized pedophilia that is practiced by the Afghan elites.

Amitai Etzioni is a university professor of international relations at The George Washington University. He is the author of Happiness is the Wrong Metric (winter 2018).