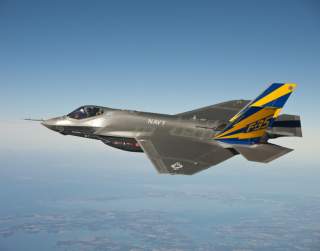 The F-35 Lightning II Joint Strike Fighter is slated to enter service for the U.S. military next year, with the Marine Corps shooting to achieve initial operational capability (IOC) for its first F-35B squadron by August 2015. This would be the first time the F-35 has achieved IOC status with any branch of the armed forces and comes three years after it was supposed to enter service. The purpose of the F-35 was to provide a fifth-generation airplane that could outfit the Air Force, Marine Corps and Navy to deal with any potential adversary.

In the meantime, the F-35 has been plagued with numerous cost overruns and delays. The development cost initially was expected to be $306 billion, but has jumped to $390 billion thus far. Software development and even overall build quality have been poor. An investigation into engine problems that grounded the F-35 fleet this summer is near completion. It also likely does not have the performance characteristics to be suitable for service as a fighter.

The continued delays and problems are costing taxpayers billions and are even harming military readiness, as the F-35 consumes a significant portion of the Pentagon's procurement budget. Some international partners the United States had counted on to buy the fighter are reconsidering their participation in the project, citing high costs.

It’s time to cancel, or at the very least drastically scale down, the F-35 project and shift the funds to deal with the strategic realities America faces.

The F-35 was designed with a peer competitor in mind, such as Russia or China. However, since the end of World War II, U.S. defense needs have mostly been countries or irregular groups whose air capabilities are far inferior. In fact, we have not lost a plane in air combat since the Vietnam War. All subsequent aviation losses have been at the hands of air-defense systems or on the ground.

Proponents of the F-35 believe the project is too far advanced to be scrapped and replaced. However, that’s not so. Air Force Col. Michael Pietrucha wrote in the May-June issue of Air & Space Power Journal, that funds would be better spent upgrading existing F-15s, F-16s, F-22s and A-10s with the technologies and lessons learned from the F-35 program, while also taking into service those F-35s already built. Pietrucha also urged development of an exportable light-fighter project (the South Korean FA-50 is an example of the concept) to arm American allies and redevelopment of the Air Force’s electronic warfare capabilities, which rely on Navy EA-18G Growlers.

Similar reforms would be appropriate for the Navy and Marine Corps. The Navy could procure upgraded F/A-18 Super Hornets, along with taking into service the relatively few F-35Cs already produced. Boeing is developing an Advanced Super Hornet version that reduces radar visibility and introduces new weapon options.

The Marine Corps, on the other hand, is extremely determined to get the F-35B into service, even though it has been the most technically plagued version. One solution for the corps' air-support capabilities could be to procure more AH-1Z Super Cobra attack helicopters, along with continuing with the planned AV-8B Harrier II upgrades to launch off of amphibious assault ships. This, combined with the F-35Bs already produced and ordered, would fulfill the Marines' need for organic air assets to support Marine operations. Or the government could continue with the F-35B portion of the program alone (most of the redesigns of the F-35 were done to accommodate the Marines) and redevelop the Marines' capabilities to form a more efficient strike force that can substitute for a full Navy carrier battle group at less cost to the taxpayer.

The most important lesson of the F-35 project is not to repeat its mistakes. From the outset, the F-35 was designed as a fighter that would be all things to all branches. It was doomed to failure because the expectations were too high and the capabilities were underwhelming. The only successful joint fixed-wing jet fighter—the F-4 Phantom of the Vietnam era—succeeded because it was originally a Navy design that the Air Force later altered for its own purposes.

It’s not too late to end this wasteful project and reinvest the money in projects that better reflect the current geopolitical reality, rather than the reality arms manufacturers, military brass and congressional members from aerospace-heavy districts wish to foist on the country. We can develop forces that can keep America safe, while protecting taxpayers. Hopefully our leaders will have the courage to make this decision.

Kevin Boyd is an associate policy analyst with the R Street Institute.