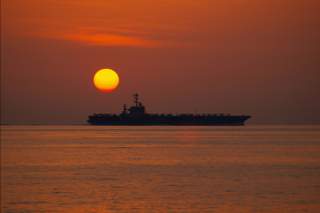 The Senate Armed Services Committee, under the leadership of chairman John McCain, has taken up President-elect Trump’s challenge to make America great again and rebuked President Obama in his final days in office. The committee’s white paper, “Restoring American Power: Recommendations for the FY 2018-FY 2022 Defense Budget,” was released this week. McCain and the committee lay out a solid series of recommendations to strengthen the nation’s armed forces after the Obama administration’s defense-sequestration program that hollowed out the military. While the white paper touches on topics that range from the clear necessity of setting aside the 2011 Budget Control Act to the best approach to cyber security, the section dealing with the Navy is both timely and critical.

As I wrote in Politico magazine in February 2015, the Navy is in crisis, as the fleet is simply too small to fulfill the missions it has been assigned by our national leadership. Recognizing this reality, the SASC wants an increase of $98 billion in the Navy’s budget over the next five years that will yield at least eighteen more ships than that Obama administration’s current plan. Giving heed to President-elect Trump’s recent conversations with leaders of defense manufacturers, “Restoring American Power” also calls for a fiscally prudent “high-low” mixed procurement strategy by purchasing 167 additional tactical aircraft, many of them fourth-generation planes.

Three of the committee’s recommendations deserve special notice: the need for a new small surface combatant, the need recommendation for a new class of aircraft carrier, and the need to quickly bring an unmanned aerial strike platform to the carrier air wing in order to extend its range and lethality.

Showing disappointment in both the performance and armament of the Littoral Combat Ships now under construction, the white paper calls for an end of procurement of these ships with the twenty-eighth ship. The twenty-eight ships of the mono-hulled LCS-1 Freedom class and the “trimaran” aluminum hulled LCS-2 Independence class can still play an important role in the fleet. They should be designated for antisubmarine warfare surveillance and mine-hunting missions—missions that their hull designs are well suited for, respectively. They should not be tasked for frontline surface warfare combat roles, for which they are ill suited.

The SASC calls upon the Navy to begin design work immediately on a new frigate, that is able to “(1) attack enemy surface ships at over-the-horizon ranges with multiple salvos; (2) defend nearby noncombatant ships from air and missile threats; (3) conduct long-duration escort or patrol missions, including anti-submarine warfare, without frequent refueling; and (4) survive in contested environments.” The committee wants the frigates in production no later than 2022. In my view, this timeline is too long. Purchasing an up-gunned Coast Guard National Security Cutter, which is currently in production in the United States, and can readily be fitted with VLS cells and sonar, or the Italian-designed FREMM frigate, that can be built under license in American shipyards, could put ships in the fleet earlier than 2022. First Lady Melania Trump should be breaking a bottle of champagne over the bow of the first of these new frigates before the end of President Trump’s first term.

The second key initiative would have naval shipbuilders transform the Navy’s current large-deck amphibs—the America-class amphibious assault ships—into light, conventionally fueled aircraft carriers. Already 850 feet long and one hundred feet wide, the Americas could be modified with catapults and arresting gear to allow them to launch up to fifty or sixty sorties a day of FA-18 Hornets to perform what the committee calls “day-to-day” missions of sea control, close air support and counterterrorism missions. These missions would be at a lower cost than the Nimitz- and Ford-class nuclear-powered supercarriers, which could focus on the growing maritime challenges posed by our near-peer competitors, China and Russia.

Third, the supercarriers would be bolstered by the white paper’s recommendation that the Navy accelerate the development of a long-range, unmanned combat vehicle that is capable of penetrating advanced anti-access/area denial defenses to deliver large payloads of precision-strike weapons. This recommendation could be accomplished if the Navy leveraged the lessons learned from the X-47B unmanned test aircraft and applied them to the new MQ-25 unmanned carrier-based tanker now under development. The MQ-25 was engineered to evolve into a strike aircraft, and that evolution should start now and be on our carrier decks within four years.

It is noteworthy that the committee appears to draw on the writings of retired navy captain Jerry Hendrix, one of the lone conservative voices at the Center for a New American Security. The need for a new frigate, the pursuit of a high-low mix in carrier and aircraft procurement, and the importance of adding an unmanned strike aircraft to the carrier air wing have all been themes in his papers. Hendrix would be a great addition to General Mattis’s new team at DOD.

“Restoring American Power" is an important contribution by the Senate Armed Services Committee to making the American armed forces great again, and the report provides President-elect Trump and Secretary of Defense Mattis with the legislative foundation to rebuild our defenses starting on day one—this Friday.

Robert C. O’Brien is a partner at Larson O’Brien LLP. He served as a U.S. Representative to the United Nations General Assembly. O’Brien was also a Senior Advisor to Governors Scott Walker and Mitt Romney as well as Senator Ted Cruz during their presidential campaigns. His book While America Slept: Restoring American Leadership to a World in Crisis (Encounter Books) was released in September. He can be followed on Twitter: @robertcobrien.