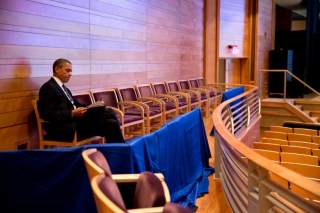 The ongoing security and foreign-policy challenges in Syria, Iraq, Gaza and Ukraine have prompted predictable criticism of President Obama as insufficiently muscular in his conception of U.S. military responsibilities, and more broadly lacking a vision or rationale for American foreign policy. That such critiques have come not just from Republican adversaries but key players on Obama’s own team—including former Secretary of State Hillary Clinton and former National Security advisor James L. Jones—is evidence of a long simmering internal debate of which the president is keenly aware.

Yet, also predictably, critics have been unwilling to propose a detailed new vision for the U.S. role, let alone one that can inspire war-weary Americans to look abroad again while also appealing to and exciting the interest of people around the world.

For Obama, it seems clear that having the United States act primarily as a global policeman is at once merely a stopgap approach and yet still fraught with peril. Deciding whether, where and how to intervene becomes a matter of real politic and avoidance of unintended consequences—that is, making the ‘least bad’ tactical decisions. And having any clear sense of alternative outcomes is well-nigh impossible. Would arming the Syrian rebels or maintaining 10,000 troops in Iraq have prevented or diminished the rise of ISIS? We’ll never know.

But more than that, simply being the world’s flatfoot patrolman, no matter how proficient U.S. cyberespionage, fails to contend with the profound challenges of the internet era, where cultural clashes, as well as armed ones, happen incessantly in real time for anyone to manipulate for ideological purposes in seconds. The digital age has made incitement of cultural hatred and resentment alarmingly easy and efficient, creating avenues for the mobilization of extremism. Add the ease of modern travel and gaining physical recruits from around the world to carry out incursions becomes similarly enabled.

So the propagandistic posting on YouTube of a radicalized British national beheading a captured American journalist as part of an extremist Salafist Muslim sect intent on establishing a 12th century caliphate “state” in Iraq somehow seems an inevitable, or at least unsurprising, extension of our zeitgeist.

The president is unlikely to be satisfied with a U.S. moral vision restricted to tactical day-to-day decision making; in other words, a policy primarily predicated on “not doing stupid stuff”, as his irritation at recent criticism seems to have exposed. Mr. Obama has spent a good deal of not just his presidency, but of his life, searching for a far more inspiring and ambitious vision of American values within a globalized world, as his candid memoir Dreams from My Father poignantly reveals. And if he tends towards cautious, systematic explorations of a law professor, rather than the bold summary decisions of his predecessor, he also appears eager to develop a conception of America’s role in the world that is grounded in strong moral foundations, as well as economic appeal and security advantages.

In this context, the president’s international efforts regarding global poverty alleviation, emancipation of women, disease prevention, clean energy deployment and climate-change protection become not just disparate liberal initiatives, but elements in a larger attempt to present a morally profound and economically optimistic face of America to much of the world. In his 2013 State of the Union address, Obama sketched out such an expansive vision:

“We also know that progress in the most impoverished parts of our world enriches us all -- not only because it creates new markets, more stable order in certain regions of the world, but also because it’s the right thing to do….So the United States will join with our allies to eradicate such extreme poverty in the next two decades by connecting more people to the global economy; by empowering women; by giving our young and brightest minds new opportunities to serve, and helping communities to feed, and power, and educate themselves…”

Given so many still-smoldering hot spots around the world, Obama may be reasonably reluctant to highlight such views and related programs publically, at least for now. (One can anticipate Fox: “Obama thinks solar panels will defeat ISIS”). Likewise, regaining the type of international reputation the United States enjoyed in the post–World War II era may seem a chimera, as nothing remotely as powerful as the Soviet Union exists to contrast it. But radical Islam—and specifically Salafi and Wahhabi extremists who compose Al Qaeda and ISIS—presents an increasingly serious threat to stability and civilized action that people around the world, including in the developing world, are waking up to. The clash of cultures between the West and groups like ISIS is at least as profound, even if far more one-sided, than that between America and the Soviets.

The question is how long will the president be content to fight extremists under ad hoc circumstances, or whether he will have the political courage to also build more-lasting strategic goodwill around the world by emphasizing and addressing other pressing issues including poverty, women’s and human rights, rule of law and corruption, clean energy, water, agriculture and climate change impacts, all as central to America’s view of a globalized future.

It would be absurd to assert such efforts will have any influence on extremists themselves. But it is equally foolhardy to expect people around the world to respect and admire America if our international aims seemed focused only on using dominant military technology to extirpate terrorists who might threaten our mainland or economic supremacy.

It seems time for the president to be more explicit and candid than he has been before about the clash of cultures between radical Islam and the West. And to put forward at the same time the positive case for what America can and will do for the world in addition to addressing terrorism. As Tom Donilon, another former Obama national-security adviser, noted recently, “it’s important to get beyond the incoming of crises around the world and look to a set of strategic initiatives that the United States can pursue that can bring about change of a permanent nature.”

Or as President Obama said regarding anti-terrorism in that 2013 State of the Union: “We must enlist our values in the fight.”

Paul Bledsoe is senior fellow on energy and society at the German Marshall Fund of the United States, and former staff member at the Clinton White House.