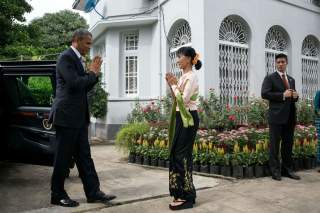 President Obama, after a final face-to-face consultation with Burmese leader Aung San Suu Kyi, announced Wednesday his intent to lift all remaining economic sanctions on the Southeast Asian. As Burma continues its historic yet unfinished transition to democracy, the decision illustrates the power of sanctions to punish and compel, as well as their limits when trying to build and bolster. Burma continues to face many severe and troubling obstacles in its quest for reform, but of the kind no longer effectively treated by the blunt instrument of broad trade restrictions. A more nuanced tool kit—one of engagement and development—will be required going forward.

In response to brutal suppression of dissent and widespread human rights abuses, the United States and others first imposed those punishing economic sanctions on Burma’s military-led regime in the mid-1990s. Aung San Suu Kyi, the British-educated daughter of a Burmese founding father, had become an eloquent and compelling symbol of the opposition to military rule and a crucial catalyst for international action.

Results were slow in coming, however. Economic sanctions are less of a body blow than they are a prolonged strangulation, and Burma’s ruling junta long resisted efforts at change. After years of official obstinacy, Burma suffered isolation and poverty that some compared only to North Korea (and, indeed, only found economic support from China). But early in the Obama administration, the Burmese regime signaled it was ready to take steps toward reform. By 2011, these steps had become too promising to ignore, and Hillary Clinton became the first U.S. secretary of state to visit Burma in fifty-six years, to assess the situation and confer with Aung San Suu Kyi on her willingness to lend the process her support. The opposition leader, who had been crucial to the country's global isolation, now lent moral legitimacy to its gradual resuscitation.

Since then, progress in Burma has been real, if halting, and U.S. sanctions policies have more or less followed suit. Aung San Suu Kyi and her National League for Democracy came to power this year after winning landslide elections against the military regime’s successor party. Though the junta-drafted constitution reserves substantial powers for the armed forces, Aung San Suu Kyi has nonetheless overseen a peaceful transfer of power just six years after still being under house arrest. U.S. sanctions, as a result, have continued to ease while still holding firm in certain areas, such as on certain mineral and precious gem exports, as well as a blacklist of individuals and entities suspected in being historically complicit in the military junta’s excesses.

In reality, the application and easing of these sanctions is more complicated than a dial of diplomatic censure that can be turned up or down depending on the most recent political developments. While the gradual lifting of these punitive measures was designed to incentivize a similarly gradual increase in investment, a good deal of uncertainty has been a drag on that investment.

For example, after the U.S. Treasury Department largely allowed companies to trade in Burma, late last year the agency had to clean up confusion regarding whether the goods being traded could transit through ports or facilities belonging to still blacklisted individuals. While in May of this year the administration further eased restrictions on state-owned banks and businesses, economic sanctions remain a crude instrument at a time when engagement in Burma requires increasing nuance. It is likely that sanctions can be partially lifted only so much before the remaining unrealized investment is (understandably) deterred by lingering fears of running afoul of remaining restrictions.

Indeed, it may be statutory restrictions on U.S. engagement with the Burmese military that is the largest hurdle to furthering reform. The most urgent unresolved issues facing Burma—such as ongoing conflicts in its periphery and the Rohingya human-rights crisis—will require significant collaboration from the Burmese army. Over the long term, Burma’s progress toward a more balanced civil-military relationship will be the defining challenge of the country’s political transition. The United States could play a crucially helpful role in these efforts, but not if it is barred from meaningfully interacting with Burma’s single most influential political actor.

For these reasons, Sens. Ben Cardin and John McCain introduced legislation on Tuesday to not only create a process to eventually end the remaining statutory sanctions on Burmese nationals and entities, but also to open the door to limited, exploratory military-to-military engagement. The bill authorizes English-language instruction, training for the military's participation in the domestic peace process and venues for engaging with other regional militaries.

The sanctions imposed on Burma have arguably helped transform the country and usher it along its path to democracy. But the considerable challenges remaining in Burma’s future are not solvable with the punishment of sanctions, but with the inducements of engagement. The United States should move forward with the president’s plan to wind down the remaining economic restrictions on Burma and ramp up its collaboration for the future. It will be more difficult and fraught than simply leaving sanctions in place, but if the goal is building positive development rather than just deterring bad behavior, it’s a risk the United States should take.

Krejsa is a Research Associate at the Center for a New American Security (CNAS).