America's Greatest Enemy Is Neither China nor Russia (It's Debt) 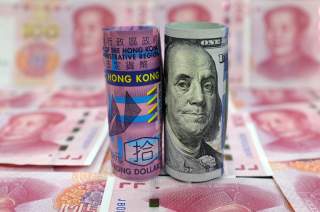 What looked possible some years ago have with recent economic policy decisions turned into a realistic scenario: the United States face a technical default.

Analyzing the composition of the budget it becomes clear that financing the net interest burden in 2022, not to speak of 2028, constitutes a challenge that the United States is unlikely to resolve without resorting to unconventional methods.

The only way the United States can eschew massive savings in social welfare related outlays is to close the eyes for deficits and debt. A quick calculation shows that in the benign economic scenario, plus assuming both military expenditures and social welfare related outlays remain broadly unchanged, the federal deficit balloons with 30 percent in the four-year period between 2019 to 2023. Looking further ahead, the deficit follows a rising trend ending 81 percent higher in 2028 than ten years earlier.

So far, the political awareness, or at least willingness, to do something is non-existing. One option is to cut mandatory outlays, but this is highly unlikely as the toxic political climate, which can be expected to last, blocks for any bipartisan agreement to change legislation. Another option is to hike tax revenue, but the U.S. Congress can only agree on lower taxes and increase military expenditure, meaning that this road is also blocked.

The United States, with or without Donald Trump as president, is caught between the devil and the deep sea. Cutting lower social welfare related outlays will produce an uproar among voters. Allowing net interest burden to eat more and more of GDP crowds out federal initiatives to boost investment in infrastructure and R&D.

There is, however, a way out which sooner or later will reach the agenda of policy makers: confront U.S. creditors and ask (or rather, demand) a restructuring of sovereign debt. These creditors are China and Japan, with each holding around $1.2 trillion worth of treasury bonds.

The U.S. trade offensive against China has led some observers to float the idea that China might threaten to dump its stocks of U.S. treasury bonds onto the market. This, however, is not going to happen. If it did, the dollar would fall, making it more difficult to export to the United States and drive up interest rates with the added negative effects on growth reducing consumption. China—and Japan—do not want that.

But they may be willing to restructure the debt. This is an offer in the style of The Godfather: “an offer you cannot refuse.” Both sides stand to gain something. Trump will claim that he took on China and managed to cut payments. China, in turn, can claim that a trade war was avoided and a restructuring deal does not mean it has given up its claims. Rather, the money will be paid over a longer period of time, or whatever other narrative is chosen.

At a first glance it may look like China stands to gain unprecedented economic power over the United States, but a deeper analysis leads to a different conclusion. It will bring home what the daily exchange of threats obfuscates: that the two economies can only thrive in tandem. China has no interest whatsoever in a weak American economy; it needs the U.S. market for its exports, incoming and outgoing direct investment with American companies, a strong supply chain allowing it to play on its comparative advantage and an American commitment to economic globalization. The United States, for its part, shares an interest in maintaining and deepening the existing supply chains, plus operating in Chinese markets where many large American multinationals harvest a strong profit.

Politically, however, the United States will unquestionably come out as a loser. It would be interpreted as a loss of face at home, in China and all over the world: the world’s former economic superpower has to ask for help to service its debt so unwisely run up over several decades.

The question will be asked whether China will put a price on its help. It may not need to do so because the mere signal of American economic impotence is sufficient to tip the scales where both the United States and China have conflicting interests. According to Wikileaks, then Secretary of State Hillary Clinton remarked to Australia’s Prime Minister Kevin Rudd during a conversation in March 2009, "How do you deal toughly with your banker?" In an interview in May 2012, after his retirement as chairman of the joint chiefs, Admiral Mike Mullen fleshed it out saying “Actually the way I said it was—and I still believe this—that it’s the single biggest threat to our national security. Obviously it’s complex, but the way I looked at it, if we didn’t get control of our debt, there would be continued loss of confidence in America.”

These astute and blunt revelations of the nexus between debt, power and confidence have largely been forgotten as the federal deficit over recent years fell to around 3 percent. The figures outlined above disclose that the birds let loose are now coming home to roost engineering a gradual power shift from one big power to another through the intricate ways such power shifts take place.