America's Hands Are Tied in Yemen 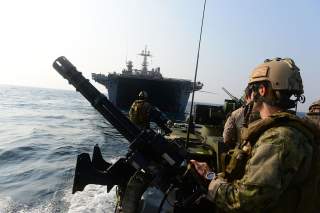 There is undoubtedly a degree of internal tension within Trump's policy towards Yemen, because of the complex array of forces on the Yemeni battlefield, but U.S. policy on the matter is hardly meant to “serve the Saudis,” as some have alleged. As in many other instances in the Middle East, in particular Iraq, all the policy options available to Washington are imperfect, and the United States must balance between problematic actors in order to protect its own interests. However, by supporting to the Saudi campaign while at the same time battling AQAP, the United States is striking the appropriate balance between fulfilling its commitment to protect its allies in the region and coping with the Sunni jihadist threat.

There is certainly good reason to question why the United States should be involved in Yemen at all. Indeed, the battlefield that served as Egypt's Vietnam in the 1960s could easily become the United States’ next Afghanistan, if it gets dragged into the civil war that teeters on the verge of humanitarian catastrophe. In addition, Washington does not see a great deal of inherent value in fighting the Saudis’ enemies in Yemen, known as the Houthis; despite claims to the contrary, hitting the Houthis hard does little to push back on Iran, because Tehran has made minimal investment in the group and the vast majority of the support it offers is vocal rather than material.

Unfortunately for the United States, the actor that it seeks to support and the threat that it aims to neutralize have found common cause in fighting the same enemies—the Houthis. This means that by neutralizing AQAP, an organization that is currently focusing the bulk of its efforts on fighting the Houthis, the United States will make life more difficult for the already stumbling Saudi-led coalition forces. At the same time, the Saudi coalition’s successes in pushing the Houthis out of sparsely populated areas without replacing them with a functional government have created a power vacuum conducive to AQAP’s growth.

However, not taking action and avoiding involvement in Yemen is also a choice that has costs. For example, allowing the Saudi-led coalition to embark on its campaign to restore the Hadi government without U.S. support would likely have catastrophic consequences for one of the United States’ most important allies in the region, and hence for the U.S. security architecture in the Middle East—this is evident from the campaign’s unimpressive results thus far even with Washington's (limited) support and the billions of dollars that Riyadh has poured into it. Similarly, failing to take action against AQAP in Yemen, perhaps Al Qaeda's most dangerous branch, could mean that the American people once more face a jihadist threat on U.S. soil. Therefore, when facing both the need to act to protect its interests as well as a legitimate fear of escalation, the United States is correct to take actions like launching drone strikes, while also supporting the Saudi campaign without taking part in it, both of which minimize the risk of being dragged into a conflict.

On the humanitarian level, the argument against the United States providing precision-guided munitions rings hollow, because of the reality that the Saudis will continue in what they see as an existential struggle against the Houthis whether or not they have U.S.-supplied precision munitions, the choice in Washington is not whether or not a Saudi campaign should or will take place, but rather whether it is conducted with precision-guided weapons or dumb bombs. It does not take a munitions specialist to figure out which of those would have a higher civilian death toll.

Therefore, despite the clear tensions between his current policies, Trump was right to choose the policy option that best protected U.S. interests, though imperfect; that is certainly preferable to abandoning America’s allies and allowing its enemies to flourish.

Ari Heistein is the Special Assistant to the Director of the Institute for National Security Studies (INSS) in Israel.