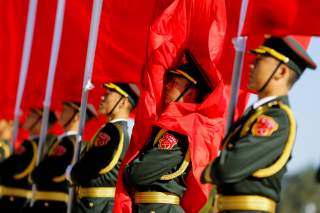 There are many reasons to criticize China: Its human-rights record is abysmal; it still does not respect intellectual property; and it pressures smaller nations to follow its policies. For example, China is known for applying that pressure on issues concerning Taiwan and Tibet. However, the charge that it is out to become a global power seeking to replace the United States and impose its own world order is not nearly as self evident.

Media reports in recent days have find that the United States is sliding toward a Cold War with China as its ambitions have risen and it is increasing throwing it weight around. Mark Landler, writing for the New York Times, reports that Trump’s trade policies have put the United States and China on the cusp of a new Cold War. Four Wall Street Journal reporters find the Trump administration is “taking aim at military, political and economic targets in Beijing and signaling a new and potentially much colder era in U.S.-China relations.” John H. Maurer recently revealed in the National Interest that China plans to conquer the world with its navy. Vice President Mike Pence stated that Beijing “ is attempting to advance its strategic influence across the world to tilt the international order in their favor.” Sen. John Barrasso, a Republican member of the Senate Foreign Relations Committee, said that “China’s goal is world supremacy.”

Decades of economic growth in China produced a sizeable middle class with rising demands. They seek better health care, less pollution, and better schools—all costly items. And the half of the Chinese population, at least five hundred million, are still quite poor and are seeking what the other half got. Social tensions are rising as is evident by the large number of demonstrations. Because of the one-child policy, the population is rapidly aging, which raises numerous social problems. In short, China has a guns or butter issue.

One may argue that a totalitarian regime can squeeze its people, deprive them as it invests heavily in arms, as the USSR and North Korea did. However, such a strategy is unlikely to work in today’s China as the legitimacy of its government is based largely on having promised its people a good life defined in terms of ever-growing affluence. Belt-tightening—especially in an economy that is slowing down—to engage in an arms race will not come easily.

In the confines of an op-ed I cannot show that the Chinese military—although it has been modernizing and has significantly build up is prowess—is nowhere near ready to engage the United States and its allies. But a few illustrative points might help. Much has been made of China’s anti-access/area-denial missiles, but note that these missiles are land-based missiles and have a limited range. They can be used to ward off a U.S. attack, but they can hardly be used to attack the United States or even Japan. China’s militarization of various small islands has received a great deal of attention. However, in a case of a military conformations these islands are like broken down, marooned, aircraft carriers, sitting targets, a lost cause. In some area the Chinese military is advancing rapidly. However, all said and done my detailed analysis of China armed forces, included in a UVA book Avoiding War with China, reaches the same conclusions as several other authorities on the matter. Thus, Charles Peña, a senior fellow with Defense Priorities, finds that China is a regional military power lacking “global conventional military power projection capabilities that directly threaten attack or invasion of the U.S. homeland.” Peña also notes that the U.S. nuclear arsenal would deter China from deploying bombers or launching ballistic missiles, thus limiting China's ability to threaten U.S. national security. Zack Cooper, in a CSIS Brief detailing Chinese military ambitions in the Indian Ocean, warns that while China’s presence in the Indian Ocean “may permit [China] to increase its regional influence, Chinese facilities and forces would be highly vulnerable in a major conflict . . . likely creat[ing] more vulnerabilities than opportunities.” Cooper’s analysis follows the 2016 assessment of his CSIS colleagues, which states that superpowers “must project power globally, but China’s capabilities remain bounded to East Asia.” David Axe, writing for the National Interest, concludes that the decisive power of the United States’ nuclear submarine fleet would render Chinese military advancements in ground operations, air warfare, and naval might inconsequential should a war break out between the two states.

Above all, there seems to be no obvious reason as to why China will want to replace the United States or become a world hegemon. It used to have the ambition of bringing its communist way of life to other nations but this ambition died long ago. Now its prevailing ambition seems to be a combination of ensuring economic growth, being respected, and findings its place as a regional power. Indeed, in private talks, many Chinese have long scoffed at the U.S. willingness to risk the lives of its young and to sink trillions of dollars in order to advance a world order. True, China is financing and building various pathways (roads, rail, etc.) in many parts of the world and these projects are sometimes viewed as indications of global ambitions. A closer look, though, suggests these investments mainly seek to ensure the flow of raw material and energy on which China’s survival depends.

Several students of international relations depict current U.S.-China relations as typical of a rising power and an old power—bound to clash. However, if China’s ambitions are mainly regional and it is not out to replace the United States as the leading world power, then there are reasons to hope such a clash can be avoided—unless the United States convinces itself that China is really out to eat its lunch.

Amitai Etzioni is a professor at The George Washington University and author, most recently, of Happiness is the Wrong Metric: A Liberal Communitarian Response to Populism. Eli Etzioni is a 2018 graduate of Claremont McKenna College, and an avid surfer and outdoors person.