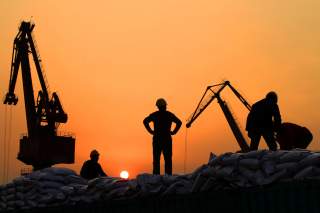 Some South Asia observers have argued that the Trump administration’s decision to exit the Iran nuclear deal will hurt U.S. efforts to stabilize Afghanistan. Their reasoning: it reduces the viability of the Iranian port of Chabahar, which India aims to use as an alternate gateway to Afghanistan, bypassing the land corridor through Pakistan. Chabahar, these observers believe, is crucial to decreasing Afghanistan’s reliance on Pakistan for trade and expanding the exports of the aid and narcotics-dependent country.

The reimposition of sanctions on Iran and the danger of secondary sanctions will indeed inhibit foreign investment in Chabahar. But the port project is already struggling. For over a year, New Delhi has struggled to secure a private sector partner for operating the port terminal, reissuing the tender several times.

But not only is the promise of Chabahar overblown, pushing Afghanistan’s economy toward greater integration with Iran could increase Kabul’s dependence on Tehran.

Landlocked Afghanistan has historically relied on Pakistan’s two major ports, Karachi and Port Qasim, for access to sea, reaching them via the border crossings of Chaman and Torkham. The Obama administration invested considerable energy in expanding trade linkages between Afghanistan and Pakistan. It helped push forward the 2011 Afghanistan-Pakistan Transit Trade Agreement (APTTA), which broadened Afghanistan’s transit trade options through Pakistan.

APTTA—which has since expired—provided Afghanistan with access to an additional Pakistani port (Gwadar); another border crossing into Pakistan (Ghulam Khan in North Waziristan); and an international border crossing (Sost in Gilgit-Baltistan, connecting to China). The agreement also enabled Afghan trucks to carry goods through Pakistan and return home with Pakistani products. It continued to permit Afghan exports to India via Wagah, Pakistan, but fell short of allowing Indian exports to Afghanistan via Pakistan. APTTA also provided Pakistan with reciprocal access to Central Asia via Afghanistan.

In addition to trade facilitation, the Obama administration disbursed through USAID roughly $200 million in funding for the upgrading of highways in Afghanistan and Pakistan connecting the two countries via the Ghulam Khan and Chaman border crossings. These projects have all been completed.

Since 2016, however, Afghanistan has shifted much of its transit trade to Iran—mainly via its largest port, Bandar Abbas. There have also been some symbolic shipments from the Chabahar port, located around fifty miles from Pakistan’s Gwadar port.

The tilt toward Iran marked a detour from Ashraf Ghani’s initial efforts to build ties with Pakistan, with a considerable focus on trade. Roughly a year after coming into office in 2014, Ghani gave up his outreach to Pakistan as conditions in his country worsened. He made clear publicly and privately that he would use trade as a lever vis-à-vis Pakistan. In 2016, bilateral trade between Afghanistan and Pakistan dropped by half and Iran emerged as Afghanistan’s largest trade partner.

Pakistan bears some responsibility for the decline in bilateral trade with Afghanistan. It has imposed heavy tariffs on some Afghan imports and has been inefficient in clearing Afghan shipments. Pakistan also shut down major border crossings with Afghanistan for a combined two months in 2017. But, it should be noted, these measures were taken in the wake of terrorist attacks in Pakistan originating in Afghanistan and after Afghan security forces fired on Pakistani census workers near the border.

Despite U.S. investments in Afghanistan-Pakistan connectivity, Ghani’s embrace of Chabahar was mirrored by senior Trump administration officials, who spoke favorably of the project till last month’s exit from the nuclear deal. It’s possible that the promotion of Afghan use of Chabahar was notionally part of the Trump administration’s half-baked “South Asia strategy.”

Chabahar is of value to Afghanistan, but not as a replacement for Pakistan’s ports. Afghanistan is poor and landlocked. It has an import-based economy and runs trade deficits across the board. Chabahar makes sense for Afghanistan as part of a diversification strategy that is regionally-focused. It can be used to grow trade with India. And it can serve as an alternate port for western Afghanistan, which not only borders Iran, but is strongly integrated with its economy.

For the rest of Afghanistan, especially its eastern population centers, the best bet for maritime trade is Pakistan. Karachi, Port Qasim, and even Gwadar are physically closer to Afghanistan eastern and southern population centers, providing cost and time advantages over Chabahar. With the extension of the Peshawar-Islamabad-Lahore motorway to Karachi by 2020, Afghanistan will have access to a controlled access, high-speed road network connecting to Pakistan’s two major ports. The network could be extended to Kabul with the World Bank-funded Peshawar-Torkham expressway—the construction of which will begin this year—and a proposed motorway from Torkham to Kabul via Jalalabad.

There is more reason why Afghanistan should not place its bets on a single logistics route. Its highway networks are in abysmal condition. And they will likely remain so for the foreseeable future. The sooner Afghan cargo is off the country’s road networks, the better. It makes little sense for goods destined to or from Kabul to loop around the country’s perimeter to reach the western border with Iran, when they can exit the country much quicker through Pakistan.

As a regional power and neighbor of Afghanistan, Iran is a necessary part of a political solution to the forty-year war in Afghanistan. But it is neither an altruistic actor nor is it simply a force that seeks stability, as some depict it.

While Pakistan enjoys a trade surplus with Afghanistan, Iran’s trade with Afghanistan is far more imbalanced in its own favor and it has shown little interest in opening its market to Afghan goods.

Afghan refugees—including many of the country’s present-day leaders—have studied at leading Pakistani universities. Meanwhile, Iran has denied Afghan refugees the right to basic education and regularly deports Afghan migrants in large number—already exceeding a hundred thousand this year. Tehran has exploited vulnerable Afghans, sending them as cannon fodder to fight in Syria in exchange for citizenship. And its influence in Afghanistan is pervasive, going beyond Persian speakers and Shias, extending into factions of the Taliban. Iran is alleged to use militant networks in western Afghanistan to obstruct infrastructure projects it opposes, including various dams and the Turkmenistan-Afghanistan-Pakistan-India gas pipeline. Elevating Iran as the main conduit for Afghanistan’s trade with the outside world would put Kabul on a fast-track toward becoming a vassal state of Tehran. One just has to look at Iraq and Syria for examples of how Iran has treated dependent countries.

The Trump administration has a range of conflicting strategic objectives in which Afghanistan plays at least a minor part. It seeks to stabilize Afghanistan, change Pakistan’s foreign policy, roll back Iranian influence in the region, contain China and its Belt and Road Initiative, and promote India as a net security provider.

There are indications that Kabul—and possibly Washington—is revisiting the idea of cooperating with Islamabad. A bilateral dialogue track between Afghanistan and Pakistan—through a framework known as the Afghanistan Pakistan Action Plan for Peace and Solidarity (APAPPS)—has proven to be remarkably resilient over the past few months. High-level talks, which have included the elected leaders of both countries and top security officials, have expanded into renewed discussions on economic cooperation. Pakistan has indicated it is willing to import Afghan cotton and the two countries are discussing connectivity, including Afghan use of the Gwadar port. All this coincides with the reopening of the Ghulam Khan border crossing after four years.

There is a significant potential upside from an upsurge in Afghanistan-Pakistan trade. With all the talk of shipping Afghan fruit to India by air, Pakistan is being discounted as a market for Afghan goods. But it’s a large country with a population of two hundred million. The two countries are linked not just by roads, but also by informal banking networks, peoples and trade networks.

Like any regional power would, Pakistan seeks influence in Afghanistan. But it has demonstrated in recent years that it’s looking for legitimate ways of influence, such as business investments, a role in peace talks, and training Afghan army personnel.

In seeking to bypass Pakistan to secure Afghanistan, the Trump administration has been at war with geography. The progress of the APAPPS process might signal that Washington has come to its senses. Or it could mean that China is playing a more assertive role in bringing Afghanistan and Pakistan together. Whatever the reason, it is encouraging—because meaningful economic and security cooperation between Kabul and Islamabad is far more essential to regional peace than a fledgling port in Iran.

Arif Rafiq (@arifcrafiq) is president of Vizier Consulting, LLC, a political risk advisory company focusing on the Middle East and South Asia. He is also editor of CPEC Wire, a digital platform dedicated to monitoring and analyzing the China-Pakistan Economic Corridor.