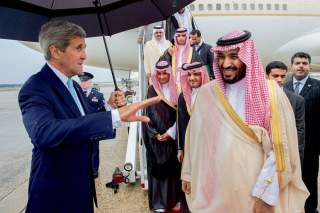 For the first time in the seven and a half years of the Obama presidency, the legislative branch was able to override a presidential veto yesterday and force the White House to implement a law that it opposes. The bill, of course, is the Justice Against Sponsors of Terrorism Act (or JASTA in Washington lingo), which provides U.S. victims of terrorist attacks on American soil with the ability to bring a foreign government to court if they have a suspicion that the foreign government in question aided or supported the attack.

The House and Senate easily met the two-thirds threshold under the Constitution: the Senate voted 97 to 1 to buck Obama on JASTA, and the House quickly followed suit by a resounding 348 to 77 margin. Congressional Democrats who the White House has come to rely on to prevent GOP–legislation from reaching the president’s desk were some of the most passionate advocates for passing JASTA despite the administration’s objections—a humiliating defeat for the Obama administration. Press Secretary Josh Earnest called the decision the “single most embarrassing thing the Senate has done since 1983.”

As senators pat themselves on the back for going to bat for Americans who have been injured or whose relatives have been killed in terrorist attacks, they seem to be oblivious to the fact their actions are rather schizophrenic.

One week, Saudi Arabia is perceived to be America’s most-vital Arab ally in a dangerous region torn by conflict, civil war and terrorism. But during the next week, Saudi Arabia is akin to a rogue state that sponsors or creates the very international terrorism that the United States has been fighting against for the last fifteen years. One week, senators trust the Saudis to use American-made weapons responsibly and in accordance with international law, but in the next week is judged as an accomplice that deserves to be held financially liable for the worst act of mass killing in the continental United States since the Civil War. If King Salman and Crown Prince Mohammed are confused about where Washington stands on their country, they wouldn’t be the only ones. It’s increasingly tough for Americans to know what is in the minds of their elected representatives, let alone Saudis half a world away.

A week before the Senate overrode President Obama’s objections on JASTA, this same body blocked a proposal from Sens. Rand Paul of Kentucky and Christopher Murphy of Connecticut that would have halted the sale of $1.15 billion worth of Abrams tanks and ammunition to Riyadh. If you’re dazed and confused, you should be. Talk about selective morality: it doesn’t make a whole lot of sense to sell heavy weapons platforms to a country that, a week later, is practically designed by the U.S. Congress as a state sponsor of the worst terrorist attack on American soil.

As Senator Rand Paul rightly asked during last week’s debate on his legislation, “does no one sense the irony?” This is, indeed, the definition of irony: approving a billion dollar weapons contract with Saudi Arabia, the very same country that lawmakers have now decided is worthy of being sued for crimes related to terrorism. It’s more than ironic, it’s irrational in every meaning of the word. It’s similar to a bugler conducting a robbery and stealing everything in sight, but then showing up the next day asking the homeowners if they want to be friends.

What are members of Congress thinking? Are they even thinking?

Washington is deal-making town. Senators who voted to kill Paul and Murphy’s amendment probably did so in part on the belief that it would free them up to vote against the Saudis and with the 9/11 families when JASTA came up on the floor. This would be a simple “have your cake and eat it too” arrangement—please Riyadh as a great ally deserving of U.S. military support, but later on make the widows and orphans of the September 11 attacks happy by siding with them several days later. This wouldn’t be the first time that lawmakers have made this kind of political calculation, and it definitely won’t be the last.

Just because it may be good politics, though, doesn’t mean it’s good foreign policy. After the completion of the Iranian nuclear agreement, Riyadh is already eyeing the U.S. with suspicion, and it wouldn’t be a foolish to believe that King Salman is probably beginning to think of U.S. officials as a bunch of hypocrites who will say one thing for political expediency, but do another. The actions of Congress over the last two weeks won’t give him much reason to doubt this theory.