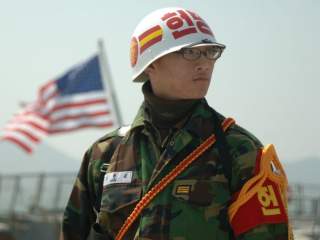 After more than six decades, United States Forces Korea (USFK) and its mission on the Korean Peninsula are a misunderstood aspect of U.S. foreign policy. This is in part because U.S. military missions in the Middle East have consumed the lion’s share of American public awareness in recent years. Furthermore, the majority of media attention and public debate regarding the perennial security threat posed by North Korea have centered on the DPRK’s weapons of mass destruction, and other strides in applicable military technology.

U.S. presidential candidate Donald J. Trump has, during his presidential bid as well as before, questioned the need for such large-scale U.S. security provisions for South Korea. Specifically, Mr. Trump has leveled the accusation that the United States is providing security guarantees for South Korea, allowing it to enjoy unprecedented levels of prosperity while the United States, in his view, receives nothing in return.

The need for reforms in the South Korea-U.S. alliance is not lost on those at the helm of the relationship. The U.S. Eighth Army has already reduced its presence on the Korean Peninsula, and Seoul and Washington have attempted to negotiate the transfer of full wartime operational command over South Korean forces to the ROK Ministry of Defense, although this has been delayed several times, most recently in 2014.

USFK are forward deployed and maintain a constant battle-ready stance. Yet observations of some of the most critical locations in South Korea reveal the flaws in the thinking that Americans are in South Korea for the sake of defending the republic itself. The U.S. military’s posture in Korea is based in the concept of “strategic flexibility,” whereby U.S. forces outside of existing basing arrangements do not constantly remain in one particular position, but respond to threats in accordance with the needs of the moment.

To see this reality in action, one need look no further than Ganghwa Island, a location on the Military Demarcation Line’s westernmost point with a centuries-long history of protecting the Korean nation. The island not only borders North Korea, but also lies only 307 nautical miles from the Chinese Navy’s North Sea Fleet headquarters in Qingdao. While the island has hosted U.S. troops in the past for training exercises and other activities, it is young South Korean marines, perched inside machine gun nests and positioned along the island’s rough northern edges, that provide the first line of defense for this strategic piece of real estate.

The absence of permanent, large-scale American military units from such a key strategic point underscores a reality missed by those who question the value of the U.S. military position in Korea. For all the talk of an "alliance forged in blood" and the rallying cry of katchi kapshida ("Together We Go"), the reality is that the U.S. armed forces are not in South Korea to do charity work. South Koreans are defending South Korea, while Americans in Korea are defending the United States’ interests in one of the most economically important areas in the world. That South Korean citizens enjoy an extra level of protection from the North Korean threat is, for many Americans in uniform, a fringe benefit at best.

The Korean Peninsula sits in the middle of one of the most important nodes in the global economic system, where several of the world’s most powerful economies—those of China, Japan and South Korea—converge. East Asia not only remains one of the most economically successful regions of the world, but regional economies are experiencing an unprecedented growth of intraregional integration.

A large part of the United States’ economic security depends on continued commercial health and stability in this part of the globe. The outbreak of armed conflict on the Korean Peninsula would likely wreak economic havoc on the region as a whole, with consequent economic repercussions for the United States.

Year-to-date trade figures for February 2016 from the U.S. Census Bureau indicate that China, Japan and South Korea are all among the top six U.S. foreign trading partners. As Kurt Campbell, Assistant Secretary for the State Department’s Asia-Pacific bureau stated before the U.S. Congress in 2011, "America’s success in the 21st century is tied to the success of the dynamic Asia-Pacific region." Managing the threat posed by instability on the Korean Peninsula to the United States’ economic interests cannot be done only through a combination of diplomacy and nuclear deterrence. It also requires the continual presence of American conventional armed forces.

Americans and South Koreans share a common goal: maintaining stability on the Korean peninsula and containing the threat posed by North Korea and its militarism. Yet where Seoul and Washington diverge is the scope and underlying motivations behind this outward display of solidarity. For Seoul, the primary mission is the defense of a republic—indeed, this is the only entity to which South Koreans are ultimately responsible.

For the United States, however, the main purpose of having a large conventional presence on the peninsula is safeguarding America’s economic interests and security. This is something that policymakers as well as the voting public should keep in mind when considering the cost-benefit ratio of sending the military to South Korea.

Anthony V. Rinna is an analyst for the SinoNK scholarly research group. He previously served as a security affairs researcher at the Foreign Policy Research Institute in Philadelphia. He currently resides in South Korea.