America's Last 'Pivot' to Asia: The Vietnam War and the China Factor 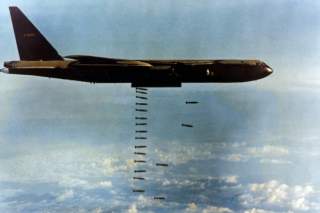 Fifty years ago this year, the United States embarked on another “pivot to Asia,” albeit one that many Americans may wish to forget. A war that took the lives of nearly 60,000 young Americans, maimed and wounded more than 300,000, and also resulted in the deaths of perhaps 2-3 million Vietnamese on both sides of the conflict, should not be relegated to the annals of another “forgotten war.” 1965 was the year when the U.S. commitment of forces to the Vietnam War went from 23,000 advisors to 184,000 combat troops and American casualties also multiplied by a factor of 20.

In fact, America’s “longest war” (before the current Afghan imbroglio at least) remains quite relevant to the current U.S. rebalance to the Asia-Pacific. The epic failure in US defense policy that was the Vietnam War offers some stern lessons in military hubris, the perils of threat inflation, not to mention the dangers of being entangled in local identity politics (“nationalisms”) on the other side of the planet. But it also has important insight for one of our nation’s foremost contemporary national security quandaries: What to do about China?

The single article commemorating the “beginning” of the Vietnam War on this forum curiously does not even mention China a single time. However, when Xi Jinping and Barack Obama meet for another summit later this month they may want to take a moment to reflect on the fact that almost exactly fifty years prior on September 20, 1965, a Chinese Mig “splashed” an American F-104 fighter over Hainan Island near to the South China Sea. Five decades on from that dangerous incident, which like many other similar recent aerial encounters could have sparked a US-China war, tensions regrettably still simmer in the same area.

The China aspect of the Vietnam War was not a minor sideshow, but actually formed the main underlying rationale for the war. The ominous “ChiCom” threat seemed poised to sweep across the whole of Southeast Asia. It is true that Mao Zedong had criticized Nikita Khrushchev for backing down in the Cuban Missile Crisis and the Chinese leader was viewed in Washington as the “black hand” that would push over all the dominoes in this unstable region after the retreat of the imperial powers. China’s very first test of a nuclear weapon in October 1964 added additional strain to the unfolding crisis. While the story of China’s role in the Vietnam War has been explored capably in English by the scholar Qiang Zhai, it is interesting that the Sino-American “crisis” of 1964-65 remains an apparently important research topic among Chinese strategists, as suggested by the article on “The Strategic Competition between China and America after the ‘Gulf of Tonkin Incident’” that was just published in the June 2015 edition of the PRC journal 中共党史研究 [Chinese Communist Party History Research].  The somewhat disturbing thesis of that essay is that “中国在这场外交博弈中胜出” [China prevailed in this foreign policy contest] after China transitioned from a position of “缓和” [relaxing tensions] to one that became “强硬” [strong and unyielding]. This edition of Dragon Eye will summarize the above Chinese paper to gain insight into current Chinese thinking about U.S.-China crisis management, as well as to underline that U.S.-China tensions in Southeast Asia are hardly a new phenomenon.

This Chinese assessment duly notes that the American focus on Southeast Asia predated this crisis by at least a decade as American diplomats had helped to set up the Southeast Asia Treaty Organization (SEATO) in the fall 1954 “以防止来自中国的‘侵略’” [for the purpose of defending against a Chinese ‘invasion’]. American leaders in the early 1960 are said to have believed that China was the “most dangerous enemy,” and directly quotes an American source suggesting that U.S. intelligence held in 1960 that “The most fundamental principle of Chinese foreign policy is to construct Chinese hegemony in the Far East.”  Predictably in a Chinese context, the Gulf of Tonkin incident from August 1964 is not portrayed in a very flattering light:  “美国终于找到了进攻北越的借口” [The U.S. at long last found an excuse to attack North Vietnam].

This Chinese analysis sees the crisis unfolding in three phases. During the first phase, both China and the U.S. are said to have adopted hardline positions. Following the Gulf of Tonkin incident, China is reported to have started work on three new airbases near the Vietnam border and had deployed a few hundred thousand soldiers to Guangdong and Guangxi provinces.  Meanwhile, Washington is said to have been guided by the “遏制理论” [containment theory] of George Kennan [凯南] in which China was considered to be determined to take advantage of any perceived American weakness to “expand its power in Vietnam.”

The author suggests a second phase of the crisis followed wherein Beijing attempted to deescalate U.S.-China tensions in the Vietnam context. He claims that Chinese leaders wanted to keep the war limited, so that it did not become a region-wide conflict similar to the Korean War. Mao’s autumn 1964 statement that neither the U.S., nor China “wish to fight …” is cited as evidence of this approach. Appraising declassified CIA assessments, this Chinese author then suggests that Washington sensed weakness in China’s approach:  “… 面对美国强大的军事威慑，中国‘没有能力’ 也 ‘不愿’与美国发生正面冲突” [Confronted by America’s formidable military deterrence, China both ‘has a lack of strength,’ as well as an ‘unwillingness’ to confront the U.S. directly in a conflict].

Apparently surprised by the vigor of U.S. escalation in Vietnam during 1965, according to this Chinese analysis, Beijing began to modify its approach to meet the U.S. strategic challenge with its own determination. During this latter phase, Chinese leaders outlined that “中国已经作了准备” [China was already making preparations] for a U.S.-China war. Mao authorized that Chinese interceptors should indeed shoot down American aircraft in Chinese airspace:  “美机入侵海南岛,因该打…” [U.S. aircraft invading the airspace over Hainan Island must be shot down …]. A second Chinese nuclear test took place in mid-May 1965. Moreover, Chinese military personnel in North Vietnam began to increase and would eventually reach a high of 170,000 PLA soldiers.  Chinese leaders also announced that they considered a “与美国的战争不可避免” [war with the United States to be inevitable]. According to this rendering of the crisis, Beijing could take some pride after the crisis had passed in the fact that it had prevented a “Korean War type of conflict” by deterring Washington from expanding its ground war “into North Vietnam and China.”

The above historical exegesis is not really intended to shed new light on this complex set of events. The facts are quite well known to experts on both sides with various obvious differences between American and Chinese interpretations. However, this Chinese article does illustrate that certain dynamics of U.S.-China strategic competition in East Asia are enduring. In any given crisis, wherein the two countries’ interests are reduced to a nearly zero-sum game and the consequences of conflict would be devastating for both countries, the contest quickly approximates a perilous game of ‘Chicken.’  In that circumstance, as is well known, the ‘rational’ solution is to feign irrationality by ripping out the steering wheel and very visibly tossing it out the window. Back in 1965, China had the bombastic Mao Zedong to help compensate for its paucity of hard power. As this historical case seemingly demonstrates, he was quite adept at the Chicken game described above.

Today, the relative balance of military capabilities in Southeast Asia has substantially changed.  U.S. and Chinese strategists will likely continue to plan for ever more elaborate games of ‘Chicken’ under these new circumstances. The Chinese article summarized above seems intended to suggest to Chinese foreign policy elites that Beijing must adopt tough and uncompromising positions rather than showing weakness by looking for compromise. Strikingly similar arguments are more and more common in American discourse about Asia-Pacific strategy as well. Alternatively, both American and Chinese national interests will be much better served if the diplomats and national leaders meeting in Washington later this month at the superpower summit can finally stop grandstanding and get serious about finding negotiated solutions to the tough issues in dispute.