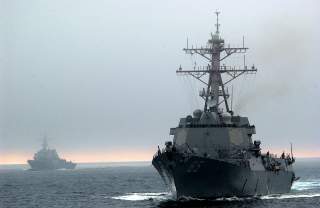 Unambitious. That’s the proper adjective for USS Decatur’s “freedom of navigation” cruise near the Paracel Islands last week. Released last year, the Pentagon’s Asia-Pacific Maritime Security Strategy lists “safeguarding freedom of the seas” first among U.S. strategic priorities for the region, followed by “deterring conflict and coercion” and “promoting adherence to international law and standards.” The Maritime Security Strategy is a fine document on the whole, and there’s no quarreling with its to-do list. The document also presents observers a yardstick to judge Decatur’s exploits in the South China Sea.

The yardstick tells a sobering tale: on balance the operation advanced none of the Pentagon’s self-professed strategic aims. It challenged one minor Chinese infraction—Beijing’s demand that foreign ships request permission before transiting waters China regards as its own—while letting China’s major affronts to freedom of the seas stand. Indeed, by seeming to acquiesce in the notion that the transit was an “innocent passage” through Chinese-claimed waters, the operation may have actually vindicated Beijing’s lawlessness. That’s no way to promote adherence to international law and standards, let alone deter conflict or coercion.

Let’s review the legal dimension, then examine how misconceived operations ripple through U.S. alliances in the Indo-Pacific. Legalities first. The Aegis destroyer traversed waters that China deems part of its “territorial sea,” offshore waters subject to Chinese sovereignty. But a simple transit like Decatur’s does nothing to dispute Beijing’s assertion that it makes the rules regulating shipping in the South China Sea—including the Paracels. Indeed, the law of the sea explicitly permits foreign vessels to pass through a coastal state’s territorial sea provided that’s all they do—pass through.

That’s why the doctrine is known as innocent passage. A vessel undertaking an innocent passage must refrain from all manner of routine military activities. It may not operate aircraft from its decks, conduct underwater surveys, or do anything else that might be construed as impeaching the coastal state’s security. Decatur evidently desisted from all of these activities—and thus comported itself as though it were executing an innocent passage through China’s rightful territorial waters.

What does acting as though China’s claims are legitimate prove? Not much. The voyage did nothing to dispute Beijing’s effort to fence off the Paracels within “baselines” sketched around the archipelago’s perimeter and proclaim sovereignty—physical control backed by force—over the waters within. To reply to that claim, Decatur should have made the transit while carrying out every activity Beijing purports to forbid—sending helicopters aloft, probing the depths with sonar, and on and on. What China proscribes, in other words, friends of freedom of the sea must do.

Fail to contest excesses and you consent to them by default.

Now, it is true that Decatur’s crew didn’t request Chinese permission before making the crossing. The destroyer’s matter-of-fact approach flouted China’s demand that foreign ships request permission before transiting its territorial sea. (For that matter, China insists that skippers ask permission before essaying “any military acts” in its offshore “exclusive economic zone,” the expanded sea belt where the coastal state has exclusive rights to harvest natural resources from the water and seafloor. Apart from the right to extract resources, the coastal state has no special say-so over what happens in the EEZ. The EEZ and the waters beyond comprise the “high seas,” a “commons” that belongs to everyone and no one.)

In effect, then, USS Decatur and the U.S. Navy were quibbling over a trivial rule China wants to enforce rather than denying that China has any right to make such rules.

One suspects Lieutenant Stephen Decatur, the destroyer’s namesake, would shake his head in bafflement. Decatur was among the most venturesome seafarers in U.S. naval annals, and not someone to blanch at jabbing coastal-state rulers who entertained grandiose pretensions. In 1804, Decatur brought the ketch USS Intrepid under the guns of Tripoli—and risked being blasted to splinters—to burn the captured sail frigate USS Philadelphia before the pasha put her to work raiding U.S. merchantmen. Afterward Lord Horatio Nelson—himself no slouch at nautical derring-do—reportedly acclaimed Decatur and Intrepid sailors for pulling off the “most bold and daring act of the age.”

Now consider alliance relations. The softly, softly approach underwriting Decatur’s cruise might mollify China, although you would never know it from the Chinese spokesmen huffing and puffing afterward about “illegal” and “provocative” U.S. actions. But circumspection in a good cause—the cause of freedom of the seas—does little to inspire fellow seafaring states to run risks of their own. Quite the reverse.

Consider what some of America’s closest allies have done in recent months. Last month the uniformed chief of the Japan Maritime Self-Defense Force distanced Tokyo from the South China Sea disputes, ruling out joint freedom-of-navigation patrols alongside the U.S. Navy. The Australian government has evidently gone wobbly as well. Foreign Minister Julie Bishop has declared that the Royal Australian Navy doesn’t conduct freedom-of-navigation demonstrations within 12 nautical miles of Chinese-claimed islands—the outer limit of the territorial sea. Nor does Canberra do much to challenge Beijing’s pretensions elsewhere in the South China Sea.

And don’t get me started on Philippine president Rodrigo Duterte, a statesman who could play a character from a Stephen King novel in his post-presidential career. The president takes to its utmost extreme the “realist” logic that weak powers should “bandwagon” with nearby “hegemons”—ingratiating themselves with domineering powers like China to protect themselves from those domineering powers and, with any luck, advance their parochial interests in the bargain. Around the same time Decatur was transiting near the Paracels, President Duterte gave a fiery speech in Beijing announcing the Philippines’ “separation” from the U.S.-Philippine alliance while professing fealty to China.

Take Duterte as a symptom—not the cause—of the malaise afflicting U.S.-Philippine relations. One doubts he would make such a break with the Philippines’ longstanding patron were he confident in America’s staying power in Southeast Asia, and in the durability of its commitment to the archipelagic state’s defense. Emboldening prospective foes while disheartening allies and friends is doubtful strategy. And yet that’s what happens when a superpower declares ambitious strategic aims in a document like the Asia-Pacific Maritime Security Strategy yet pursues these aims incoherently and halfheartedly.

In short, Washington has made itself look like an inconstant steward of the global commons. In the future the U.S. Navy must challenge what needs to be challenged—reassuring allies and friends that America remains strong and resolute. And as naval leaders draw up operations and strategy, they should ask themselves:

What would Decatur do?