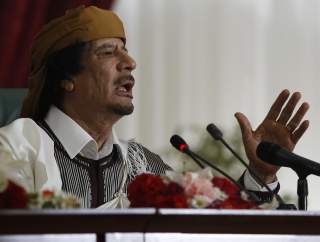 THE 2011 intervention in Libya, authorized by the United Nations and led by the United States and some NATO allies, has been criticized for two main reasons. First, it was justified on phony grounds—that Libyan leader Muammar el-Qaddafi was slaughtering civilians, when in fact he was carefully targeting rebels who had attacked first. Second, the interveners aimed at regime change and thus failed in their ostensible humanitarian mission, instead magnifying the death toll at least ten-fold while fostering anarchy that persists until the present day. Yet perhaps the most profound drawback has remained hidden: the intervention rescued a rebellion that was actually led by Al Qaeda militants, not by pro-Western liberals as reported at the time.

This starkly contradicts the press narrative of 2011, which claimed that Libya’s unrest had started with peaceful protests over the arrest of a human rights lawyer. Allegedly, the regime used lethal force against these nonviolent demonstrators, compelling them to reluctantly take up arms in self-defense. These amateur rebels then supposedly seized control of eastern Libya within days, prompting Qaddafi to deploy forces to commit genocide, which was stopped only by intervention. In reality, however, scholars and human rights groups have long disproved key parts of this story: the uprising was violent from the first day, the regime targeted militants rather than peaceful protesters and Qaddafi never even rhetorically threatened unarmed civilians.

The remaining mystery has been who actually launched the rebellion in eastern Libya—that is, which militants did the interveners rescue from defeat and help overthrow Qaddafi? The conventional narrative improbably suggests that Libyan human rights lawyers, reacting spontaneously to regime violence, somehow acquired arms and conquered half the country in a week. The truth makes much more sense: the rebellion was led by Islamist veterans of wars in Afghanistan, Iraq and Libya. Thus, the United States and its allies, not realizing it at the time, intervened to support Al Qaeda.

This remarkable story has remained obscured for eight years due to deceit and gullibility. The deception was spearheaded by Libya’s non-Islamist opposition groups who sought intervention to overthrow Qaddafi by falsely claiming he was massacring civilians. The gullible audience was initially the international news media, which parroted the propaganda, and then Western politicians who responded with intervention. Meanwhile, the Islamist rebels refrained from touting their Al Qaeda connection, in order to benefit from the interveners’ supply of airpower, weapons and training.

After years of research, I unraveled this mystery starting with an unlikely source: YouTube. Perhaps not surprisingly, in the age of smartphones, some rebels videoed their exploits and uploaded them in near real time. Western analysts largely overlooked this evidence because it was unconventional, posed language barriers and contradicted the conventional wisdom. However, the videos suggest an alternative history, which I was able to confirm using retrospective interviews and fragments of contemporaneous reporting that had been overwhelmed at the time by the flood of propaganda.

This evidence reveals that the Islamists planned the launch of the rebellion prior to any peaceful protests and then used snowball tactics, targeting a series of increasingly important security installations by obtaining weapons from each facility to use against the next larger one. At many such targets, some of the defending forces defected out of fear or sympathy, further bolstering the rebels for their next assault. The militants initially attacked police stations with rocks and petrol bombs to get firearms, which they used against internal-security forces to acquire higher-caliber weapons. In turn, they utilized this materiel to attack an army barracks to acquire even heavier weapons and armored vehicles, which they then deployed to capture eastern Libya’s main garrison and four air bases—all during the week of February 15–21, 2011.

The Islamists timed their rebellion to coincide with a planned, nonviolent “Day of Rage” on February 17, 2011, which had been organized online for several weeks mainly by Libyan expatriates in Europe inspired by the Arab Spring uprisings in Tunisia and Egypt. Qaddafi’s regime tried to preempt the advertised peaceful protests by arresting a suspected organizer, Fathi Terbil, in Benghazi on February 15. However, this fueled public outrage, triggering premature starts to both the pacifist and militant uprisings that same evening. International media attention initially focused on Benghazi, where the largest nonviolent protests occurred, but the more consequential events started in two smaller cities in eastern Libya—Derna and Beida—both hotbeds of militant Islam. In Derna, the historic epicenter of Libyan jihadists, “plans were in place from February 14” to attack security institutions, according to Yasser Ben Halim, a longtime Islamist militant who participated in the planning of the rebellion and then fought his way to the capital, eventually becoming head of the Tripoli Military Council’s protection forces after the war.

Even in Benghazi, some protesters resorted to violence from the start, provoking a rapid escalatory spiral with government forces but failing to acquire sufficient firepower on their own to capture the city’s military base, the Katiba Al-Fadhil Abu Omar, the largest in eastern Libya. On the nights of February 15 and 16, these militants threw petrol bombs and rocks at police and at a Revolutionary Committee building and set cars on fire. Police at first responded only with rubber bullets and water cannon, so that most of the thirty-eight victims injured in the opening confrontation were security forces. This initial restraint by the regime was because its top officials had agreed, “that we needed to deal with the events without using force,” according to Mustafa Jalil, who was Justice Minister at the time but then defected to lead the political opposition. A Libyan commander subsequently confirmed to UN investigators that, “only after demonstrators acquired arms did the Qaddafi forces begin using live ammunition.”

On February 17, the Benghazi protesters attacked and burned additional police stations, security installations and Revolutionary Committee buildings. They seized AK-47s and heavier machine guns from a military base in Benghazi’s al-Rahba neighborhood, and in the city center they launched their first unsuccessful attack on the Katiba. Government forces responded with their first live-fire in Benghazi, aiming to wound rather than kill on this day, according to a French doctor who worked in a city hospital. By February 18, the protesters reportedly had burned all police stations in Benghazi and set ablaze two internal security buildings, freeing prisoners and seizing additional weapons and ammunition. Police officers fled for shelter to Benghazi’s public security headquarters, where militants attacked them again and set the building on fire.

Qaddafi then reinforced the Katiba with additional troops who used deadly force against the attackers, thereby also harming some unarmed protesters. According to a doctor who treated casualties in the city’s trauma ward, the militants commandeered construction equipment in attempts to breach the walls of the garrison, and “the young people were making human shields for the drivers of the bulldozers.” One of Qaddafi’s sons, Saadi, who was in the garrison, justified the government’s use of force as follows: “When those guys came with weapons and wanted to attack the Kateeba, of course they were gonna get in and kill the soldiers. So they [the soldiers] had to defend.” By contrast, when confronting unarmed protesters at the main courthouse on February 18, Qaddafi’s security forces fired only tear gas. The regime survived these violent and peaceful protests in Benghazi for five days, until the arrival of better-armed Islamists from the east.

DERNA WAS long known as Libya’s militant Islamist heartland. In the mid-1990s, it had been the capital of the Libyan Islamist Fighting Group (LIFG), the biggest previous threat to Qaddafi’s rule. Several years later, Derna became the world’s most concentrated source of Al Qaeda foreign fighters to Iraq. Thus, it should be unsurprising that in 2011, Derna was also the first place in Libya where the rebels obtained military weapons to confront the regime. On February 16, less than a day after the Benghazi protests started, Derna’s “Islamist gunmen . . . assaulted an army weapons depot and seized 250 weapons, killed four soldiers and wounded 16 others,” Agence France Presse reported. These jihadis were assisted by the defection of an army colonel, who “joined them and provided them with a rocket-propelled grenade launcher, three pieces of anti-aircraft artillery and 70 Kalashnikov” rifles, according to a Libyan security official.

Two days later, following Friday prayers on February 18, Derna’s Islamist militants launched a broader offensive. They attacked the port and seized seventy military vehicles, and set fire to the general security directorate, internal security directorate and Revolutionary Committee building. As security forces fled, the militants seized control of these installations and the city. According to a supporter of the rebels, they also captured Libyan officials, locked them in a jail cell and then burned the building with the officials inside.

The Islamist militants had planned these attacks on February 14, even prior to the outbreak of Benghazi’s protests, according to Ben Halim:

We had all agreed to set off from the mosques, which we coordinated with area residents. So on Friday [February 18], we went out immediately after prayers and headed for all security departments in the city. We took control of them. We were also joined by the police force and guards. That lasted for about four hours, then we headed for Al-Beyda where there was one of Qaddafi’s brigades called Al-Jareh. We managed to overpower them. After that we went to Benghazi—that’s where the real battle started.