America's Military Bases in the Asia-Pacific: Strategic Asset or Vulnerability? 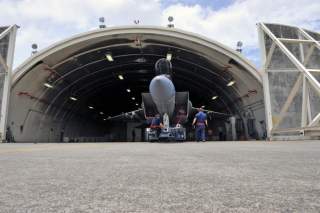 With yet another territorial dispute underway in the South China Sea, this time over China’s placement of a massive oil rig inside Vietnam’s exclusive economic zone, the arrival of the new book Rebalancing U.S. Forces: Basing and Forward Presence in the Asia-Pacific could hardly be more timely. Do not let the title of this collaborative masterwork deceive. More than merely a history of America’s basing archipelago in the Asia-Pacific theater, Rebalancing U.S. Forces is a critical examination of the assumptions underlying U.S. basing, and therefore U.S. strategy, for the region. The result is some worrying questions policy makers and military planners must reckon with as they struggle with the rapidly shifting security landscape in the Western Pacific and Indian Ocean.

Editors Carnes Lord and Andrew Erickson, both professors at the U.S. Naval War College, are uniquely suited for this project. In addition to his academic accomplishments, Carnes Lord has long service inside the White House and the National Security Council staff. Andrew Erickson’s intimate knowledge of China and its military forces and doctrine has made him a veritable one-man national asset. Lord and Erickson, in turn, have recruited an eminent roster of contributors to this anthology who provide a survey of the history, practicalities and future of the U.S. base structure in the Asia-Pacific region. The recurring theme from all of these contributors is an underappreciated logical conundrum: while America’s military bases in the region are essential for its diplomatic and military strategies, they are also swiftly becoming its greatest weakness, and call into question assumptions and military operating concepts long taken for granted.

Erickson and Justin D. Mikolay begin the book’s examination on Guam. Political constraints and friction with allies and partners around the region have led U.S. military planners to look to Guam, U.S. territory on the edge of the Western Pacific battle space and an island whose residents and political leaders, unlike those on Okinawa, actually clamor for a larger military presence. The result is plans to greatly expand the basing of submarines, airpower, and Marines on the island, decisions Erickson and Mikolay endorse. However, they also point out that Chinese military planners have taken note of the rising U.S. military concentration on Guam and thus its troubling emergence as a tempting target during a possible conflict.

Toshi Yoshihara, another Naval War College professor, examines Chinese academic and military journals to uncover their views of the U.S. basing structure in Japan. According to Yoshihara, many Chinese strategists are focusing their attention on the Yokosuka naval base near Tokyo, the home port for the aircraft carrier USS George Washington and its escorts. Yoshihara concludes that targeting planners in China’s ballistic and cruise missile forces have undoubtedly given Yokosuka a thorough examination. Indeed, according to Chinese sources, striking relatively soft targets like Yokosuka, Sasebo, and other such bases would be a better employment of Chinese missile power than attacks on heavily defended carrier strike groups at sea. These Chinese planners are well aware that U.S. naval strike groups require frequent replenishment to stay in action, something that would be difficult to maintain if supporting bases are destroyed. If so, China’s planners may be adopting the ideas of Col. John Warden, a U.S. Air Force theorist who recommended bypassing attacks on fielded forces in order to focus firepower on central structures of the adversary’s power (like major military bases).

In a chapter on the expanding U.S. presence in Singapore, Chris Rahman, an Australian researcher, notes that even though Singapore is not a formal treaty ally, the depth and significance of the U.S. strategic relationship with the city-state now exceeds that of formal allies such as Thailand and the Philippines. Singapore is now the key logistics and maintenance hub for Navy and Air Force operations in the South China Sea, and is the critical gateway for the U.S. presence into the eastern Indian Ocean. For its part, the Singapore government looks to its security relationship with the United States as a critical force for regional stability. Yet should a conflict with China occur, there remain doubts over whether hosts such as Singapore (and South Korea) will allow their territory to be used by possible belligerents such as the United States. Chapters on South Korea, Australia, Diego Garcia, Central Asia, and the concept of sea basing complete the book’s comprehensive examination of America’s presence in the region.

Unlike many anthologies, the contributions to Rebalancing U.S. Forces are uniformly excellent. Each chapter essay is thoroughly researched and sourced, and is written by experts well familiar with the history, dilemmas, and future challenges of each location. Seven first-rate maps of U.S. facilities spanning the region further enhance the book.

Common themes emerge from the book’s disparate authors. America’s forward military presence in the region, now in its seventh decade, has been an indisputable success. During this span, the region has avoided a major power conflict and has enjoyed remarkable expansions in living standards and political freedom. Although the terms have certainly fluctuated over time, America’s allies and partners in the region have welcomed the security U.S. military forces have provided. The archipelago of bases and the U.S. forces on them have been a demonstration of America’s commitments and have been essential to the operating concepts and military strategy U.S. policy makers and commanders have promoted. In short, it is hard to imagine an American alliance and partnership network in the region without the forward basing structure described in Rebalancing U.S. Forces.

Yet the rise of China’s missile power has also revealed these bases to be the U.S. military’s gravest weakness, a malady to which the authors repeatedly return. In the past few years, much research has focused on the vulnerability of major air bases such as Kadena on Okinawa. In Rebalancing U.S. Forces, Toshi Yoshihara and others remind us how naval bases such as Yokosuka and Sasebo in Japan are surely also targeted by China’s missiles, attacks that would leave U.S. naval strike forces in the region unsupported. By next decade, as the range and accuracy of China’s missiles continue to improve, seemingly secure outposts such as Guam and Diego Garcia will also be at risk. Finally, the increasingly intimidating nature of China’s missiles, combined with China’s deepening economic penetration across the region, has created doubts over whether U.S. forces and facilities in places such as South Korea and Singapore will be open for business should conflict occur.

The unsettling conclusion is that U.S. bases in the Asia-Pacific region are becoming a paradoxical contradiction. They are essential for sustaining U.S. forward presence and for maintaining America’s alliances and partnerships. But as Rebalancing U.S. Forces reminds us, by next decade, it may be the case that these bases will no longer be useful military assets should a conflict break out. Indeed, positioning even more forces at increasingly vulnerable sites, such as is now occurring on Guam, will actually exacerbate instability during a crisis. Chinese commanders will perceive tempting targets for a disarming strike, while U.S. commanders could find themselves explaining the logic of “use it, or lose it” to decision makers in Washington.

What is the future of America’s Asia-Pacific bases? Policy makers will have to continue investing in them, if only for the symbolic commitment they represent to U.S. allies. Meanwhile, these policymakers would be wise to develop operating concepts, forces, and plans that reduce reliance on these bases in the case of actual conflict. But first, they should read Rebalancing U.S. Forces to obtain a deeper understanding of the challenges America and its partners face.

Robert Haddick is an independent contractor at U.S. Special Operations Command. He writes here in a personal capacity. In September 2014, U.S. Naval Institute Press will publish “Fire on the Water: China, America, and the Future of the Pacific,” Haddick’s book on the rise of China’s military power and U.S. strategy in East Asia.