For America's Military, Less Is More in the Middle East 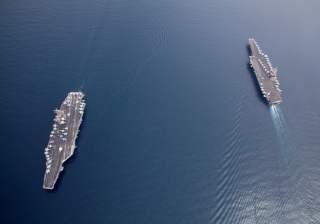 The U.S. military is back in Iraq. The Obama administration is currently conducting airstrikes against ISIS militants and is slowly increasing the number of troops on the ground. Critics like Senators John McCain and Lindsey Graham say that is not enough, and they bemoan the fact that the administration didn’t keep soldiers in Iraq past 2011. They are sure that U.S. interests will suffer without a strong U.S. presence in the region. Chaos followed when Washington left, they say, and someday it will come back to haunt us.

The critics are wrong. More U.S. forces are not needed, even given the current crisis. The United States was right to draw down forces in the region, and it can continue to secure its key objectives with a small military footprint. When it comes to the Middle East, less is more.

What are those objectives and what forces are necessary to achieve them? The most obvious problem is terrorism, a threat that seems to be growing in the wake of ISIS’s advance and the grisly killings it has left behind. Some believe the threat is higher than at any other time since September 11, and they demand a major military response.

In reality, the United States has done best against terrorist groups when it has invested minimal forces. For more than a decade, U.S. special operations and intelligence personnel have worked to destroy Al Qaeda. They have largely succeeded. Osama bin Laden built a formidable organization in the 1990s. It was disciplined, wealthy, well organized and led by charismatic men. That version has been demolished, its leaders almost all dead or in prison.

The United States failed, on the other hand, when it used large armies for quixotic nation-building projects in Afghanistan and Iraq. Though these wars were complicated, they both offer a simple lesson: the United States is very good at using small forces to kill terrorists and dismantle their networks, but it is not very good at using large ones to manage other people's civil wars.

In addition to reducing terrorism, the United States has an enduring interest in protecting the flow of oil from the Persian Gulf. It has performed that role for nearly forty years. It can continue to perform it with a much smaller military presence.

To understand why, consider the British experience from World War II until the late 1960s. At this time, it was the undisputed hegemon of the Gulf, and no one challenged British power. Nonetheless, Britain exerted outsize influence with surprisingly few arms. Despite its reputation as the dominant force in the Gulf, no more than a handful of Royal Navy ships were on patrol at any given time, along with a minuscule air and ground presence.

The British approach was based not on overwhelming numbers, but on superior intelligence and speed. As long as it had early warning about a looming crisis, it could deploy local ships and soldiers as a show of force, while buying time to mobilize forces from other parts of the empire. In this way, London could protect its interests without having to maintain a large and costly military presence.

The United States can deal with threats to oil by following the British approach. This means maintaining a skeletal infrastructure to support intelligence assets like high-flying drones, which are useful for spotting signs of terrorist attacks on oil facilities or mine-laying operations against shipping. The bases would also be able to accommodate follow-on forces if necessary.

In the meantime, the United States can safely draw down its current land, air and naval footprint. The Army has already sharply reduced its presence, and because there are few serious threats requiring a large ground force, it can reduce it further. Having fewer boots on the ground also removes symbols of the United States from the intensifying sectarian conflict in the region. Osama bin Laden claimed that he was infuriated and motivated by the large U.S. land force in Saudi Arabia. We should not provide similar motivation to the next “bin Laden.”

The Air Force no longer needs to maintain a strong combat capability in the Gulf, but it should maintain a durable intelligence, surveillance and reconnaissance capability in order to provide early warning. It should also maintain enabling aircraft, like tankers and airborne command platforms, to organize outside forces in the event of a crisis.

Finally, the Navy should continue to maintain minesweepers and other vessels needed to ensure oil security. But there is little reason to sail aircraft carriers through these waters when virtually all of their combat power would remain intact if they operated from the Indian Ocean. Carriers are designed for blue waters, not shallow environments like the Gulf, where they are more vulnerable.

A slimmer military posture would allow the United States to achieve its main interests without getting mired in an open-ended sectarian feud. A smaller force will also ease the diplomatic consequences of an enduring U.S. presence. The latest phase of Iraq’s long civil war has led to calls for a stronger U.S. response, but the president should resist the urge to escalate.

Editor’s Note: A portion of this piece appeared in the Dallas Morning News, here.