America's Military Might Is Unmatched: 5 Ways to Keep It That Way 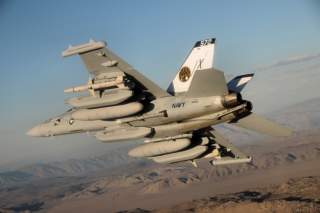 The United States already fields the most dominant military force the world has ever seen. But the nation must take steps to ensure that dominance. New technologies are emerging that the Pentagon must invest in if the United States is to remain the world’s foremost power. The greatest threat to that aim is a moribund acquisitions process that wastes huge sums of money and fields hardware years behind schedule. That being said, here are five broad areas the Pentagon needs to invest in for the future.

Despite the Pentagon’s investment in stealth technology, electronic warfare will become ever more important in the future. Foreign powers are investing in new types of low frequency radars operating in the UHF and VHF bands that can detect and track fighter-sized stealth aircraft. Eventually, with enough computing horsepower and fast data-links, those radars will be able to generate fire control quality tracks that would be able to guide missiles.

The Pentagon and the U.S. Navy recognize the problem—even if the U.S. Air Force leadership doesn’t. The Navy is investing in the EA-18G Growler and the Next Generation Jammer (NGJ). However, the current NGJ program only addresses so-called mid-band threat emitters—which are the most immediate current threat. The Navy needs to invest in a low-band NGJ pod to attack UHF and VHF band radars so that the Growler can support stealthy tactical fighter aircraft.

The Pentagon must also continue to invest in offensive and defensive cyber warfare capabilities. There is some work that is being done, but we’ve only scratched the surface of tactical applications for cyber warfare.

Since the early part of the 20th Century, submarines have been the single greatest threat to surface warships. That fact remains true today. While the Navy continues to invest in anti-submarine warfare technologies and the training needed to operate that hardware, there can be no slip up. Ultra quiet diesel electric submarines are proliferating worldwide and those boats pose a deadly threat to the Navy’s surface fleet. The Navy needs to pursue advanced low-frequency active sonars—which it is already doing— and other sensors to detect and track enemy subs. The Navy also needs new weapons to ensure it can kill those enemy boats at range. Those weapons might include advanced autonomous unmanned underwater vehicles, among other things.

The Pentagon is already pursuing laser weapons; the USS Ponce recently deployed with a prototype laser to the Persian Gulf. Laser weapons have long been considered science fiction fantasies, but the technology has matured to the point where such systems could be viable for frontline use.

Lasers consume a lot of power—a problem that clearly must be solved. They also don’t do a huge amount of damage. As such, the primary use for such a weapon might be defensive in nature. Miniaturized lasers could be mounted onboard fighters and bombers to jam or even shoot down incoming surface-to-air and air-to-air missiles. The same applies to warships and ground vehicles.

One of the big advantages of a solid-state laser is that it does not require ammunition. Currently, U.S. forces are limited by their magazines—an enemy might overwhelm a cruiser or destroyer which have roughly 100 missile tubes onboard. With a laser, that would not be a problem since its ammunition is basically electricity. Thus, those missile tubes could be reserved for offensive weapons.

Like lasers, rail guns are often dismissed as science fiction fantasies, but such weapons might be nearing prime time. Rail guns hold enormous promise for both offensive and defensive applications.

Offensively, rail guns could launch extremely high velocity, low cost projectiles over huge distances. Effectively, with a large rail gun, one could bombard an area potentially hundreds of miles away relatively cheaply. Another application—assuming that the technology ever became compact enough and there was enough power available—would be direct fires. Imagine a tank gun that could tear through enemy armor like it wasn’t even there.

The more compelling use of the rail gun might be defensive. U.S. warships devote much of their firepower to defensive capabilities, carrying weapons like the SM-2, SM-3 and SM-6 to defend carrier strike groups from air and missile attack. Those missiles cost a lot of money and there is a limited supply. Rail gun ammo would be small and cheap—and a lot more plentiful. Defensive rail guns could protect a carrier strike group from an enemy missile attack on the cheap. In fact, it could cost the enemy money—if a $10 million enemy ballistic missile is shot down by a $1,000 rail gun slug—the cost curve could be on America’s side for once.

The United States has the lead in drone technology, but the Pentagon needs to continue to invest in such technologies in order to maintain its edge. Right now most unmanned systems are remote controlled or semi-autonomous. However, against a sophisticated adversary, communications might not be assured. Therefore, autonomy is required. A drone must be able to make its own decisions within a set rules of engagement. Basically, it must be able to discriminate and judge proportionality as required by the laws of war. This doesn’t just apply to the air—it is applicable on the seas, in space and on the ground.