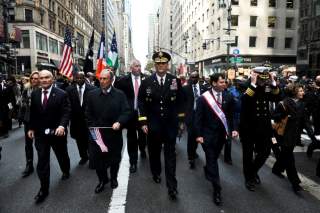 After half a decade of study, the Pentagon has proposed to Congress a radical overhaul of the military retirement system. The new plan addresses the unfairness of a system in which most who serve in uniform earn nothing toward their future retirement but makes serving a full career less attractive. More importantly, while the primary incentive for the new plan is to improve military readiness by reducing the cost of retirees, it’s doubtful the plan will actually save money given its reliance on retention bonuses and failure to address the massive issue of healthcare costs.

For generations, the Department of Defense has enticed people to make a career of the military by offering a generous pension after at least twenty years of service. Known as “cliff vesting,” those who served for fewer than twenty years got nothing while those who made it to twenty get 50 percent of their base pay for life upon retirement. Those who stay in past twenty years defer that benefit but accrue an additional 2.5 percent of their pay a year, maxing out at 75 percent at thirty years.

While there has been some modest tinkering with the system over the years, the basic concept has remained the same for some seven decades. When my father retired from the U.S. Army in 1982, his pension was based on his highest paycheck; nowadays, they are based on the average of the highest three years of pay. Additionally, for a brief time starting in the mid-1980s, the pension was reduced to 40 percent at twenty years but with an additional 3.5 percent per year thereafter to entice people to stay in through thirty years; it reverted to the old system very quickly.

If the new plan is adopted, future personnel would get only 40 percent of their base pay at the 20 year mark but they would ostensibly be made whole by a higher payout starting at the age of fifty nine and a half years. And, for the first time, those who served honorably at least two years would get at least something at that 59.5 year mark.

It should be emphasized that the new plan would not affect those currently in uniform unless they opt into it. While it would be mandatory for new personnel, those serving now would have a choice between the existing system and the new one. Indeed, the proposal would phase the plan in starting in 2018 to give the services time to educate their force on the best choices given their personal situation.

One major problem with this system is that it leaves 83 percent of enlisted personnel and 51 percent of officers with no retirement savings at all. While that wasn’t a major concern in the days of the draft, when every able-bodied man was expected to serve, it seems manifestly unfair after a quarter century of near-constant deployments to combat zones for the 1 percent of Americans who volunteer for service. Additionally, we’re living longer and need much more savings for retirement. The loss of those early years of investment is devastating given the value of compound interest.

The new plan addresses this inequity by automatically enrolling all new personnel into the Thrift Savings Plan (TSP) that other government workers, including DoD civilians, use as their primary retirement vehicle. The DoD would contribute 1 percent of base pay into the account upon entry into service and members would be required to automatically deposit 3 percent of their base pay into the fund, being allowed to opt out only after “completion of financial literacy training at their first permanent duty station.” Additionally, DoD would match member contributions up to 5 percent.

Members would vest after two years and the account would be portable. The plan’s authors estimate that “approximately 85 [percent] of Service members would receive some measure of retirement benefit,” with the balance leaving the service before completion of two years. Like typical private sector plans, the money would not be available until the age of 59.5 absent certain emergencies. Those discharged for punitive reasons would lose the DoD contribution but not their own investment.

Unfortunately, the white paper announcing the plan offers no information on how much this concession to fairness would cost. Given the claim of overall cost savings, however, it’s a transference from those who serve a full career to those who serve only a few years.

Most of the various studies and commissions over the last few years have proposed doing away with the twenty year-50 percent pension model, with some doing so without grandfathering those currently serving. While that would certainly yielded more robust savings, it was both a political non-starter and a breach of faith.

Under the more modest proposal offered by DoD, those who enter into the service after January 1, 2018 will be in a “blended” system, with a pension of 40 percent of base pay after twenty years and the proceeds of their TSP account available at 59.5 years. The DoD claims that those who contribute up to the 5 percent of the matching level will actually achieve a greater lifetime benefit than under the current system.

Aside from the cost issue, the issue that has vexed the reformers here is that of how best to retain the best people in an all-volunteer force. Since we ended the draft in 1973, we’ve seen the ability to recruit and keep quality folks rise and fall with the vagaries of the civilian economy and the national defense posture. Naturally, the steady paycheck offered by the military is more enticing when it’s harder to find a better job on the outside. And, while there can be a short, patriotism-inspired boost after an event like the September 11 attacks, it’s harder to get people to volunteer for the military when they’re very likely to get shot at.

The military has several tools in its arsenal. First, of course, are immediate pay and benefits. As noted, they have gone up substantially over the last decade and a half. Second, there are signing and retention bonuses. Third, there’s the lure of a pension.

A RAND Corporation study commissioned by the DoD reported last November that “the typical service member is young and would prefer to receive higher pay as they serve, rather than a higher annuity once they complete twenty years of service” Thus, as they concluded, “compensation costs are higher than necessary.”

But that tells only part of the story. One reason the twenty year-50 percent pension model has persisted so long is that it’s a very powerful tool for retaining mid-career personnel who are highly trained and ready to lead. While the prospect of getting a pension twenty years down the road probably isn’t that enticing to the average 18-year-old private, it’s really hard for a 28-year-old staff sergeant to walk away after ten years when he knows he’s throwing away a nice paycheck for life. And, for commissioned officers, who have more career options, the pension is demonstrably a bigger draw in that fully a third of them stay on through the twenty year mark.

The Pentagon’s solution to the problem is to rely more on retention bonuses, which they’re now terming "continuation pay.” This proposal would look similar to the current system of retention bonuses. That won’t be cheap.

In an interview with the Military Times, Anthony Kurta, the Deputy Assistant Secretary of Defense for Military Personnel Policy, admitted that, "As soon as you reduce [the fixed-benefit pension] particularly in those middle years, the eight to 16 years, you are going to lose retention because the pull to 20 [years] from that retirement is less.” He added, "That is how the whole system works. We have taken some future compensation and we've moved it into current compensation—the current compensation is that continuation pay. Without that, and without talking about that, the new system doesn't work."

How much this will cost is not directly addressed in the DoD white paper and, indeed, it’s probably unknowable. The amount of money necessary to entice people to stay in will, as noted previously, almost certainly depend on the state of the private economy and whether we’re in the middle of a long, grueling shooting war. The advantage, however, is that it’s a one-time cost for dealing with an immediate issue.

A Drop in the Bucket

While the change in the sacred twenty year-50 percent pension paradigm will be controversial and may well be short-lived, as it was a quarter century ago, the emphasis on continuation pay and deferred retirement compensation for the force are steps in the right direction. The proposal, however, does not do nearly enough to address the crisis at hand.