America's Navy Is Spread Too Thin 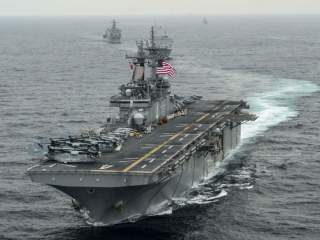 Earlier this month, I had the privilege of being on a panel as part of the Naval War College’s Regional Alumni Symposium, discussing the strategic importance of the Black Sea region, along with Michael Kofman of the Center for Naval Analysis and Chris Marsh of the School of Advanced Military Studies. After all, as Marsh noted, the Black Sea is assuming much greater importance as part of China’s ambitious “one road, one belt” system, designed to link the Asia-Pacific and Euro-Atlantic worlds—a point made graphically clear by Parag Khanna’s “connectography” maps, while Kofman called attention to Russia’s new power-projection capabilities emanating from Crimea. Yet for all our eloquence in calling for the Black Sea to assume greater importance in American strategic thinking, equally compelling cases were being made for why additional U.S. attention and resources need to be deployed in the Mediterranean, the Baltic Sea and the Arctic Ocean. And without the ability to instantaneously transport equipment and personnel from one area to another, the United States must either massively increase its defense and security expenditures to increase its presence in all theaters, trust that allies will finally meet the challenge and increase their own spending to fill in the gaps, or accept risks in certain areas.

Most likely, however, the United States will continue with its “talisman” approach of the last several years: the assumption that stretching existing resources thinly across a wide front guarantees that there is a token American presence, which will prove sufficient to dissuade any challengers from taking action. The problem here, of course, is that small numbers of U.S. personnel and equipment are enough to “fly the flag,” but are not in any position to decisively change the local balance of forces. A handful of U.S. ships cannot simultaneously engage in missile defense activities, deter the Russians, intercept migrants and quarantine security threats from spreading, while a small number of U.S. ground personnel can only effectively serve as a trip wire—and if the trip wire has no back-up, then its effectiveness is further reduced.

It has become a strategic truism that the United States must find a way to “rebalance” or “pivot” among its obligations in the European, Pacific and Middle Eastern theaters of operation. However, this can gloss over an equally important problem: how to balance the American commitment within each of these regions. It is not enough to consider the need to shift forces between the principal regions of the world, but also where these forces will be stationed. In Asia, where should U.S. attention be paid—the South China Sea, the East China Sea, the Korean Peninsula, the Southeast Asian archipelago or the Indian subcontinent? In the Middle East, is the challenge the Islamic State in Iraq and Syria, Iran and the Persian Gulf, the problems on the Arabian Peninsula, the fate and trajectory of Egypt, destabilizing trends in the Maghreb—or will we see, as every previous administration and Secretary of State has done, a focus in the last year on the holy grail of solving the Israeli-Palestinian problem?

The problem in Europe, for instance, is that there are now several simultaneous crises that affect the security of the Euro-Atlantic community: the migration crisis across several parts of the Mediterranean, the internal cohesiveness of the European Union amid economic challenges and the ability of Russia, on the basis of home-ground advantage, to quickly mobilize and feint in several different regions at once. The United States does not have the luxury of prioritizing one challenge over the others—or to have the prescience to determine which crisis is the one most likely to flare at any given time.

For the past two years, much of the attention has focused on a possible Russian threat to the Baltic states—the risk of a quick incursion that could not be swiftly met and blocked by the Western alliance. This has led to modest increases in spending, and greater discussion of the infrastructure needs for projecting American and allied power into eastern and central Europe. The increased focus on this sector, however, has meant less attention in the Arctic and the Black Sea, where Russia is also putting down new markers. China’s arrival as a Mediterranean player is slipping through the cracks. Some have raised concerns that the real threats from the south that could doom the EU and NATO are being ignored because of the overemphasis on the Baltic theater, with warnings that “the alliance risks coming up dangerously short on the threats that matter most to most of Europe and thus to NATO. . . if NATO fails to define a strategy for its southern challenges, it could slip into strategic irrelevance.”

The strategic guidance upon which U.S. defense planning has been based has been rendered inoperative by recent events. Europe is neither quiet nor stable, and the United States is not extricating itself from the Middle East in order to free up resources to support an Asia-Pacific rebalance. Moreover, there are multiple, overlapping challenges in all of these areas. The United States has not been served by a reactive approach that rushes from crisis to crisis. The only way for the United States to forge a coherent set of policies is to begin to prioritize what areas are most critical for U.S. security and interests—and to make clear to allies and partners that America’s ability and willingness to continue to plug the gaps when others fail on meeting their commitments is waning. The Warsaw NATO summit occurs at a time when many allies, despite their rhetoric of concern about the threats facing the alliance, still have not increased their defense and security spending, assuming that, as usual, Washington will pull it out of the bag at the last minute. That dynamic has to change if the alliance is to be in a position to project strength and reassure its members.

In a post–Cold War world, the United States has gotten used to the localized crisis, where the full force of U.S. attention could be directed. It is time to regain the more global attitude that characterized U.S. strategic thinking—of being able to “walk and chew gum at the same time”—and to prioritize and resource accordingly.