America’s Next Move in Asia: A Japan-South Korea Alliance 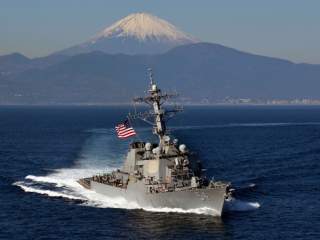 North Korea’s latest rocket launch has led officials in both Seoul and Tokyo to call for a strong response. In light of Pyongyang’s numerous provocative actions, the United States’ closest allies in East Asia are rightly concerned about the regime. These concerns require Washington to act decisively to emphasize its commitment to peace and stability on the Korean Peninsula and, more broadly, across the Asia-Pacific region. Toward this end, the current alliance structure must be revamped to create a stronger defense partnership between the United States, Japan and the Republic of Korea. A stronger trilateral alliance would ease the overall strain on the United States’ defense capabilities. Moreover, current geopolitical realities make such alliance-building more possible now than at any time in recent memory.

Until recently, close cooperation between South Korea and Japan seemed impossible. Historical strains dating back to Imperial Japan’s occupation of the Korean Peninsula weighed heavily on the relationship, and Seoul’s attempts to grow closer to Beijing worried many in Tokyo.

Today, however, prospects for ROK-Japan cooperation are increasing. Following the first official meeting between Japanese Prime Minister Shinzo Abe and Korea President Park Geun-hye in November, the two countries reached an agreement at the end of the year on the long-disputed “comfort women” issue—Japan would apologize for sex slavery during World War II and ROK would finally let the issue rest—removing one of the most salient obstacles to better relations. North Korea’s recent provocations have further accelerated the thaw in relations between Tokyo and Seoul by reinforcing the need for both to work together to counter Pyongyang.

The United States has treaty obligations to defend both South Korea and Japan, with military personnel based in both. Thanks to the comfort women agreement and the improving relationship between Park and Abe, the latest provocations by the North offer a unique opportunity to reshape the security landscape in Northeast Asia. While the United States has long managed defense relations through the so-called “hub and spoke” system of bilateral ties centered around Washington, the Obama administration should use its final year to move toward a new trilateral security relationship to enhance security in the region.

The Case for a New Security Alliance

The challenges to security in the Asia-Pacific require a more dynamic approach than exists today. For one, Pyongyang’s successive nuclear provocations have made clear China’s lack of real influence over Kim Jong-un. Chinese officials have long claimed they have little leverage, and their statements increasingly ring true. Even though China does not want a nuclear-armed North Korea, evidenced by its lead nuclear negotiator’s recent visit to Pyongyang, it also has legitimate concerns about implementing harsh sanctions that could potentially destabilize North Korea. Without any clear course of action, it seems unlikely China can lead the North back to the Six Party talks, and therefore other means for bringing Pyongyang to the negotiating table must be explored. Close U.S.-ROK-Japan trilateral ties could serve as new leverage to restart dialogue.

Moreover, enhanced cooperation between Washington, Tokyo and Seoul would also help to solidify the progress made with comfort women agreement. Both Park and Abe are facing a domestic backlash from the deal, but agreement to pursue trilateral ties with the United States would show good faith with one another and with the United States. Such mutual trust is key to fully normalizing relations between Tokyo and Seoul.

Enhanced trilateral relations would also increase trust in U.S. commitment to the region. Policymakers in South Korea have expressed feelings of isolation and worry in recent weeks and there have even been calls for the South to develop its own nuclear deterrent. Others in Seoul have fretted over Japan’s recent defense reforms and expressed concerns of remilitarization. Both notions are extreme, but it speaks to an undercurrent of insecurity throughout South Korea. A trilateral alliance would alleviate such worries by reaffirming the United States’ commitment to the Peninsula’s stability and clarifying Japan’s role in regional security.

In Tokyo, meanwhile, legislators have expressed feelings of isolation, especially as ROK leaders have warmed to China. China’s rapid military modernization and increasingly assertive actions have created a sense of vulnerability in Japan, while a lack of firm commitment from its nearest neighbor has only exacerbated this feeling. They have been a driving factor for Abe’s defense reforms, including Japan’s new security legislation. Still, prospects for greater Japanese military engagement has faced domestic opposition among voters who prize their pacifist history since 1945 and fear that legacy will soon be gone with the prime minister’s plan to create a more robust defensive capability. Tighter trilateral relations could assure both camps. With its strongest partner, the United States, and its nearest democratic neighbor, South Korea, standing beside it, Japan would be both less isolated and more likely to remain peaceful through the benefits of mutual defense.

In weighing the benefits of stronger trilateral coordination, the Obama administration would be wise to consider the gains the United States stands to make as well. With the United States, Japan and ROK working increasingly as one, U.S. forces would be shouldering less of the burden. Stronger partners results in an ease of effort for all. Furthermore, a stable U.S.-ROK-Japan alliance provides the foundation for stability in East Asia—one of the chief aims of the U.S. rebalance to Asia.

Peace and security in the Asia Pacific are paramount for continued U.S. prosperity, but trilateral U.S.-Japan-ROK cooperation alone will not ensure regional stability. In fact poor execution could have a destabilizing effect by making China and North Korea feel encircled and threatened. North Korea’s singular focus on survival may lead to a backlash to any action that seems threatening to its survival. In order to counteract such worries, the United States must accompany any trilateral agreement with clear messaging about U.S.-Japan-ROK intentions. One additional way to reassure Pyongyang would be an honest effort at negotiations, which would signal Washington’s desire for stability rather than overhauling the regime.

Achieving the full potential of the Asian Century necessitates a robust alliance between the United States, Japan, and South Korea. Admiral Harry Harris, the commander of U.S. Pacific Command, recently alluded to this need when he described Japan and Korea as the “cornerstone of our Asia policy” while speaking in Washington. He understands these countries are unequivocally our two most important allies in the region and called for stronger and closer trilateral integration. Such multilateral partnership still faces many obstacles in both Japan and South Korea, but areas of progress abound in missile defense, humanitarian assistance/disaster relief, maritime domain awareness and security, and intelligence sharing, to name a few. True trilateral partnership will not come quickly, but the sooner all three nations begin taking small steps, the sooner the ultimate goal can be reached.

McDaniel Wicker is an Asia securities fellow at the Wilson Center.