America's next Security Competition Will Be in Central Asia 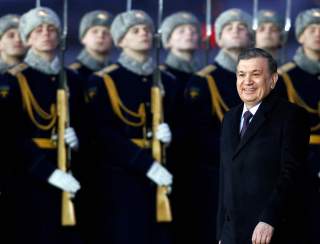 A 1990s song by the Scorpions, a German rock band, about the Russian perestroika went like this:

The wind of change

Blows straight into the face of time

Like a stormwind that will ring the freedom bell

For peace of mind…

Today, Central Eurasia is undergoing another broad transformation, one that may lead to regional cooperation and growth. This was the take-home message from my visit to Kazakhstan last month for the 2017 World Expo and Astana Economic Forum. Unfortunately, the United States, distracted by Washington scandals, Russia investigations, the health-care debacle, and a myriad of foreign-policy crises, may miss the boat—but it had better not.

Today, the Scorpions’ predictions come true as the winds of change blow in Central Asia. Improved relations between Kazakhstan, Kyrgyzstan, Tajikistan, Turkmenistan and Uzbekistan, started with a power transition in Tashkent. Upon the demise of its long-serving President Islam Karimov, the new Uzbek leadership generated new opportunities, not just for their country, but for everyone in the area.

As tensions subside, including talk of cooperation on hydropower generation at the huge-mountain dams and water supply for agricultural irrigation, investors are beginning to see Central Asia as a fifty-million-strong market, with consumers starved for goods and services.

Economic opportunity is one of the reasons why India and Pakistan attended the June 8–9 meeting of the Shanghai Cooperation Organization in Astana and joined the organization as full members, while Iran is seeking membership, and Turkey is considering the idea. This is a new geopolitical reality, one in which four nuclear powers—Russia, China, India and Pakistan—all bordering the region, are playing in its sandbox while the United States looks on from outside. This “splendid isolation” does not bode well for American businesses wishing to be involved in opportunities for growth.

And speaking of growth, the Central Asian countries have themselves come of age and are increasingly playing roles beyond their region, punching above their relative international weight.

The first Central Asian country to move beyond natural resources to an industrial and post-industrial, services-based economy is Kazakhstan, which has outperformed not just its “stan” neighbors, but also all other post-Soviet states, including Russia, in terms of the quality and pace of reforms. Only the Baltic States are considered today more developed than Kazakhstan.

With its “hundred steps in the right direction” reform package, Kazakhstan plans to join the Organisation for Economic Co-operation and Development by 2030. The reform package aims to improve the courts, the civil service and e-government. It will cut through the red tape, streamline customs, and improve the electrical grid and transportation. Additionally, the English law-based Astana International Financial Center—complete with a stock exchange, a court and an arbitration tribunal—has been launched with the intent of becoming the regional financial and economic hub. The center is co-owned by the Shanghai Stock Exchange, and closely connected to the Dubai Financial Center.

The United States needs to view the changes in Eurasia as a set of political-military, diplomatic and economic opportunities. The two previous U.S. administrations obsessed about Afghanistan and viewed the region through the prism of that war. Washington needs to get beyond that.

The C5+1 framework, which brings the United States and the five Central Asian countries together, is a good start. The Trump administration needs to build on the success of C5+1 and the working groups it has launched. New appointees should develop concrete programmatic work. Improving people’s plight and the region’s business climate—not just meetings—should be the outcome.

It is hard for American business to compete with China’s investment in hardware as part of the One Belt One Road mega program. Beijing is heavily subsidizing One Belt, One Road infrastructure projects to absorb the excess capacity it has built to construct ports, railroads, airports and fiber-optic cables. However, the United States can and should play to its strengths and concentrate on software—banking, finance, IT, legal services and securities brokerage. Kazakhstan’s Astana International Financial Center is an example of how this cooperation can work—and more are needed.

Kazakhstan, which holds a seat on the UN Security Council in 2017–18, and its neighbors are also open to security cooperation against the violent Islamists trickling back from the battlefields of Syria and Iraq. Cooperation on this issue may be possible not only through the C5+1, but also with Russia and China. Developing an understanding about the rules of engagement for the United States in Central Asia, however, may be difficult, as reports are also trickling in that Russia is arming the Taliban.

Nevertheless, increasing U.S. cooperation with Kazakhstan should be relatively easy. Astana said it would focus on Central Asia and Afghanistan during its UNSC chairmanship in January 2018, potentially seeking a UNSC resolution on that matter. Such an approach is supported by Central Asian countries. The United States, UN delegation and U.S. State Department could explore whether it would be beneficial to support such a regional initiative.

With the China-Russia collaboration, the Shanghai Cooperation Organisation expansion, and the Beijing-led One Belt, One Road reformatting Eurasia as we know it, the United States cannot afford to just sit and look on from the bleachers. It needs to get onto the field and play.

Without a clear strategy for economic and security involvement, Central Asia will remain what I called it in my 2005 book Eurasia in Balance —“a bridge too far.” That is not an option. With the world getting smaller and major security competition afoot in Eurasia, the Trump administration should not remain a bystander.

Ariel Cohen, PhD, is a nonresident senior fellow at the Atlantic Council and director, Center for Energy, Natural Resources and Geopolitics, at the Institute for the Analysis of Global Security.