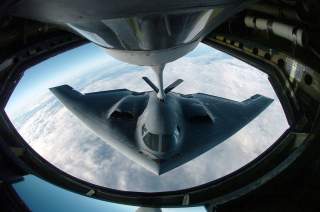 Joint Chiefs of Staff Vice Chairman Gen. Paul Selva told the House Armed Services Committee (HASC) during a March 8 congressional hearing that “the fundamental role of U.S. nuclear forces is to deter a strategic attack against the United States, its allies and its partners. Simply put, nuclear weapons pose the only existential threat to the United States and there is no substitute for the prospect of a devastating nuclear response to deter that threat.” To deter this existential threat to the nation, the United States maintains nuclear weapons in a nuclear triad made up of submarine-launched ballistic missiles, ground-based intercontinental ballistic missiles, and air-launched missiles and gravity bombs carried by U.S. Air Force strategic bombers. All of these platforms are aging and require modernization. General Selva expressed the commitment of the entire Joint Chiefs of Staff to replacing the triad by stating that “there is no higher priority for the Joint Force than fielding all components of an effective nuclear deterrent, including weapons, infrastructure and personnel.” However, the modernization required to maintain effectiveness does face criticism and some are looking to eliminate a portion of the triad in an effort to save money and minimize the nation’s reliance on nuclear weapons.

During the same hearing, some HASC members pressed Gen. John Hyten, the commander of Strategic Command, to name the triad leg most in need of replacement. General Hyten said it was impossible to answer that question because it was like picking a favorite child. You just cannot pick one triad leg because the ability of the nuclear triad to provide deterrence to the nation relies on all three working together.

While General Hyten did not select a triad leg in his testimony, the nation’s sixty-six strategic bombers capable of delivering nuclear weapons constitute the oldest nuclear assets in the arsenal. These bombers are about forty-five years old and some of the bombers entered the service in the 1960s. Today, the Air Force uses two types of strategic bombers to make up the air-based leg of the nuclear triad—the Vietnam-era B-52H Stratofortress and the stealthy B-2 Spirit. These bombers are based inside the continental United States at Whiteman Air Force Base in Missouri, Minot Air Force Base in North Dakota and Barksdale Air Force Base in Louisiana. The B-52H and B-2 fly strategic-bomber missions from these bases and are air refueled. The B-2 carries variants of the B61 nuclear gravity bomb, while the B-52H carries a nuclear-armed air- launched cruise missile (ALCM).

This leg of the nuclear triad provides its own vital attributes to ensure the nation has a survivable and reliable nuclear deterrent force. These attributes are unique to the bomber force and different from the sea-based and ground-based legs of the triad. First, bombers are a visible deterrent to aggressors and can influence how another country acts toward the United States or its allies. If a crisis is looming, national leadership can forward deploy these bombers to overseas bases and conduct strategic deterrent bomber missions in close proximity to the aggressive nation. The leader of the other nation and its citizens see this action and may be compelled to reverse their aggressive actions. It also visibly assures regional allies that the United States stands with them against aggressive actors. Second, bombers provide leaders a great deal of operational flexibility. Specifically, they can conduct their missions from the relative safety of bases inside the United States and refuel enroute to their targets. They have the ability to launch their weapons so they will not overfly a country which could lead to confusion in a nuclear exchange. These bombers can also carry conventional weapons. This capability minimizes the different types of bombers in the U.S. inventory and leads to cost savings through economies of scale both when the aircraft is purchased and when it is maintained. Additionally, the president can recall the bombers while enroute to their targets if the president decides not to launch nuclear weapons. This increases the president’s decision timeline. Finally, the strategic bomber force carries the complete array of weapons in the nuclear arsenal from a damage-producing standpoint. The weapons range from ones able to inflict a great deal of damage to ones that inflict a relatively small amount of damage. These weapon “yields,” which control the amount of damage caused, can be changed more easily than nuclear weapons in the other legs of the triad. This gives the president the ability to respond to a nuclear attack with a nuclear weapon that will inflict a calculated amount of damage.

As previously stated, the current inventory of strategic bombers is already old and must be replaced to maintain the attributes of this leg of the nuclear triad. The Air Force plans to do this by purchasing a minimum of one hundred B-21 Raider long range strategic bombers with an average procurement cost of $564 million in 2016 dollars. The first B-21 is expected in the force by the mid-2020s. While the B-21s are coming into the force, the B-2s will need multiple upgrades to keep them viable until the late 2020s. The Air Force is also taking measures to upgrade and modernize the existing B-52Hs, which will allow them to remain in service until 2050. Such improvements would give this airframe an impressive ninety-year service life.

Along with upgrading the current bombers and building the B-21, the Air Force is developing a long-range standoff (LRSO) cruise missile to replace the ALCM and also working on life-extension programs for the B61 gravity bomb. The ALCM is twenty-five years beyond its life expectancy and it is in the middle of a third life-extension program to allow it to last until the LRSO is ready for use. The legacy B61 bombs in the inventory require a service-life extension, termed B61-12, which will improve the overall performance of the weapon while enabling the Air Force to save money by reducing the total stockpile of weapons through the consolidation of four weapons versions into one.

The most scrutinized portion of this modernization program is centered around the introduction of the LRSO missile. Some argue against this new weapon if the Air Force plans to also upgrade the B-61 gravity bomb and build the stealthy B-21 Raider. Opponents of this new missile fail to look to the future and realize the stealth capability of the B-21 could be obsolete while it is still in service. Adversary air defense systems are improving, and some suggest only 12 percent of the current bomber force is survivable from the air. The nonstealth B-52H bomber relies on the ALCM to launch at targets outside of the effective range of these systems. By choosing to not replace the ALCM with the LRSO, the government risks rendering this entire leg of the triad obsolete if adversaries learn how to overcome the stealth of the B-21 in the future. Additionally, the ALCM and replacement LRSO missile allows one bomber to launch multiple missiles at different targets. This is an advantage over the B61 gravity bomb, which has to be flown over or near the target prior to being dropped. Therefore, one bomber can cover several different targets with multiple ALCMs/LRSOs. This allows the overall size of the bomber force to be smaller, which minimizes the cost to modernize and maintain this leg of the triad.

The only future certainty is unpredictability. The United States will face challenges from state and nonstate actors that may not be on anyone’s radar in 2017. However, the United States must take steps today in order to maintain a deterrent against future aggressive actors. Such steps should include deciding how it wants to modernize its nuclear weapons and their delivery platforms. Because of the age of the current nuclear triad, the window for debate is ending. The oldest of all the triad’s platforms reside in the strategic bomber leg. The Air Force’s plans to upgrade and extend the life of the B-2, B-52H and associated weapons (ALCM and B61-12) while simultaneously building the B-21 and LRSO, are wise investments. The B-21 coupled with the LRSO provides the nation with an operationally flexible platform with the stealth capability to penetrate enemy air defense systems or deliver a standoff cruise missile if aircraft cannot penetrate those systems. These upgraded air assets and associated weapons, when paired with the capabilities of the other two legs of the nuclear triad, will provide the nation with a sound strategic deterrent for the majority of the twenty-first century.

Will Wiley is a submarine warfare officer in the U.S. Navy. The opinions expressed here are the author’s and do not represent the official position of the U.S. Navy, Department of Defense or the U.S. government.