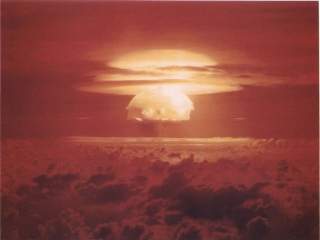 Fifty years ago, the CIA produced a Special National Intelligence Estimate (SNIE) on China’s nuclear weapons program for President Lyndon Johnson. Overhead photography taken three weeks earlier revealed that a Chinese installation in Lop Nor was definitively a nuclear test site and would come online in two months. However, the CIA estimated, China would not have the necessary amount of fissionable material, which the United States assumed would come from a small plutonium reactor at Baotou, until mid-1965.

Seeking to make sense of the conflicting timelines, the CIA began to speculate: perhaps the Soviets had transferred additional fissionable material, perhaps the CIA was unaware of other enrichment sites, or, perhaps, as is often the case in large undertakings, progress among the different elements of China’s nuclear program had merely become uneven. In conclusion, the SNIE reads, the available facts “do not permit a very confident estimate of the chances of a Chinese Communist nuclear detonation in the next few months. Clearly the possibility of such a detonation before the end of the year cannot be ruled out—the test may occur during this period. On balance, however, we believe that it will not occur until sometime after the end of 1964.” Seven weeks later, China tested its first nuclear bomb on October 16, 1964, a highly enriched uranium implosion device.

Fifty year later, it is this assessment that could land on President Obama’s desk with regards to Iran’s nuclear program and it is this assessment that strikes fear in America’s Middle Eastern allies. Israelis and Arabs alike worry that by the time America is certain that Iran is within reach of possessing a nuclear weapon, Washington’s ability or willingness to stop it will be out of reach. Despite clear evidence of a Chinese test site in its final stages, the CIA did not believe Beijing had enough weapons-grade plutonium and, therefore, still assessed that any test was close to a year away. The SNIE, in the words of former Secretary of Defense Donald Rumsfeld, had too many “known unknowns” in its nuclear picture and the Johnson Administration did what it thought was reasonable and responsible: nothing.

American allies fear the Obama Administration will similarly let Iran go nuclear due to a lack of certainty. Not once has the American intelligence community accurately predicted when hostile states have gone nuclear and not once has an American president used military force to stop them from doing so. Six weeks before the Soviets tested their first bomb in August 1949, U.S. intelligence confidently assessed that a Russian test was at least two years away. Twenty-five years later, a postmortem CIA report on its failure to predict India’s “Smiling Buddha” test blamed itself for denying the president the opportunity to try and prevent Indian proliferation. Most recently, the Bush Administration was blindsided by Israeli intelligence showing the existence of a Syrian plutonium reactor. Even then, the United States demurred, ultimately prompting Israel to take actions into its own hands.

Intelligence gathering about purposefully secretive nuclear programs of American enemies is a Sisyphean endeavor. In fact, the major Iranian nuclear facilities of Natanz, Arak, and Fordow were discovered only belatedly by Western intelligence. Blaming the intelligence community and its faulty predictions for instances of nuclear detonation is like blaming the bookie for the race results. While the CIA and others can seek to bound the “known unknowns”, it is the president’s responsibility to decide whether and how to act.

When President Obama receives an intelligence estimate similar to the one President Johnson received a half-century ago, what will he do? Just like his predecessors, he could conclude that, based on the best available intelligence, Iran was not yet able to produce a nuclear bomb and that the United States could not, in good conscience, use all necessary means to preempt such a development. Instead, he could ask for more time in the hopes that the United States would acquire more certainty in its assessment of Iranian nuclear progress. Possessing unique military capabilities and blessed by the security of physical distance, such caution is likely not fatal. Were it caught unaware yet again, the United States would still possess the time and means to destroy Iran’s nuclear program even postbreakout.

Neither is true for Iran’s neighbors. Without bombers and in immediate range of Iranian missiles, regional states do not have the luxury of waiting for perfect, real-time intelligence—unless they are convinced America will stop an Iranian breakout under all circumstances. Therein lies the rub that explains why America’s allies are so distressed: while Washington can wait until it is undeniably convinced of an imminent Iranian breakout, Jerusalem and Riyadh cannot and do not trust that an Iranian nuclear weapon is indeed President Obama’s redline. Given America’s track record, who can blame them?