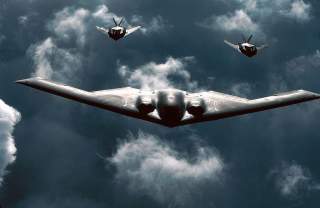 Lost in the news over the past week was the requirement in the January 27, 2017, presidential memorandum on rebuilding the U.S. Armed Forces for the secretary of defense to initiate a Nuclear Posture Review (NPR). The memorandum called for this review in order to ensure that the United States nuclear deterrent is modern, robust, flexible, resilient, ready, and appropriately tailored to deter twenty-first-century threats and reassure our allies. This requirement was expected, and the Air Force and Navy staffs were already working to complete this tasking, but the outcome of the review and what will be released to the public will be important for many years to come.

The excessive age of all three legs of the U.S. nuclear triad is well documented and the modernization efforts by the United States are lagging behind its major competitors, China and Russia. The cost of the modernization is not trivial. Most estimates place the cost to modernize the triad at $1 trillion over the next thirty years. Additionally, the decisions about what type of force will be built must be made by this administration, and these platforms will make up the triad until 2070. Therefore, this NPR is vital and must not be taken lightly by the public and decisionmakers.

As the NPR takes shape, the authors will be influenced by allies and experts on the subject. Arguments will be made to support increases and decreases in the role nuclear weapons play in the security of the nation. There are some, like former Secretary of Defense William Perry, who are pushing to further reduce the nuclear arsenal below the New START treaty levels of 1,550 deployed warheads and even eliminate the ICBM leg of the triad. This would leave the nation with a dyad that features the submarine-launched ballistic missiles of the U.S. Navy’s submarine force and the air-launched missiles carried by U.S. Air Force bombers. Secretary of Defense James Mattis indicated he may be open to eliminating the ground leg when he asked in 2015, “Is it time to reduce the triad to a dyad, removing the land-based missiles?” This would reduce false-alarm danger. It seems Secretary Mattis was not indicating he wanted to eliminate a leg, but rather the nation should decide precisely what the role of nuclear weapons should be and then modernize the arsenal to accomplish that goal. The secretary’s final position remains to be seen, but this should be the goal of the NPR. First, focus on the role nuclear weapons play in defending the nation and allies from conventional and nuclear attack. Determine if the arsenal is designed to prevent proliferation of nuclear weapons around the globe. Then, determine what capabilities will achieve those roles. And finally, determine what weapons and systems are required to achieve those capabilities.

To those who are ready to eliminate the ground-based deterrent leg, it is important to remember what these weapons do for the triad. First, the existence of the missiles requires an adversary, most likely Russia, to commit a large amount of its own nuclear arsenal to eliminate the ICBMs. Most believe Russia would target each ICBM with two of its own missiles. Since there are approximately 450 ICBMs in the U.S. arsenal, destroying this leg of the triad would “cost” Russia nine hundred of its warheads, which constitutes about half of its nuclear arsenal. Second, the ICBMs are deployed in silos throughout the Midwest in lightly populated areas. Eliminating this leg would free up Russia to target other more populated U.S. cities with its large nuclear arsenal. Next, the majority of the ICBM force is in an alert status at any given time, which means they can be launched against an adversary inside of thirty minutes. This alert status of ICBMs eliminates the need for nuclear armed U.S. bombers to always be airborne. It also provides flexibility in target coverage for a ballistic-missile submarine that suffers a material issue or a personnel issue requiring it to return to port. Finally, it requires an adversary to strike the U.S. mainland to eliminate the ability of the United States to retaliate in kind.

Taken in total, this leg is vital to achieving strategic deterrence for the United States. The cost estimates to replace the current Minuteman III ICBMs with the new ground-based strategic deterrent missile and retain the abovementioned capabilities is still being determined. However, initial estimates put the cost between $60 and $80 billion over the next three decades, which is less than 10 percent of the total nuclear triad modernization bill. This seems like a small price to pay for these important capabilities.

In closing, it is difficult to see how the other two legs of the nuclear triad pick up the capacity lost by eliminating the ground-based leg of the triad if the nation decided to go to a nuclear dyad. Therefore, the new report issued by the NPR, ordered by President Trump, should support the continued existence of these vital pieces of national deterrence residing in missiles silos throughout the Midwest.

Will Wiley is the U.S. Navy Senior Fellow at the Atlantic Council and a submarine warfare officer in the U.S. Navy. The opinions expressed here are the author’s and do not represent the official position of the U.S. Navy, Department of Defense, or the U.S. Government.

Image: A B-2 Spirit bomber is followed by two F-117 Nighthawks during a mission. Wikimedia Commons/U.S. Air Force