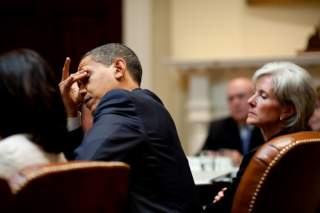 Today the U.S. Supreme Court ruled that the federal government could continue to subsidize health-insurance coverage through Healthcare.gov, the federal exchanges. An ecstatic President Obama declared that Obamacare is “here to stay.”

A judicial victory doesn’t automatically translate into a political victory, let alone a policy success. Once they’ve quaffed their celebratory champagne, the president and White House staff will need to suit up and get ready to play some hard-nosed defense.

Here’s why. The driving force behind health reform has been the desire to control rising health-care costs. From 2008 onwards, President Obama promised that his reform agenda would reduce the annual cost for the typical American family by no less than $2,500. After a while, it became a rather tiresome talking point. But it was pure nonsense from the start.

Health-care spending increases were slowing down well before Congress enacted Obamacare. But with the onset of Obamacare, health-insurance premiums in the exchanges jumped by double digits, while deductibles increased dramatically. If you liked your doctor, you would be able to keep you doctor, the president insisted, but maybe not, in reality, depending upon whether or not your physician networks narrowed. Looking toward 2016, health insurers say premium costs will soar.

In the days, weeks and months leading up to the King v. Burwell decision, commentators obsessed over the roughly 6.4 million persons who could lose health-insurance subsidies. With the Court’s ruling, they can keep the federal subsidies. But that doesn’t come close to ending the debate.

Roughly 6.4 million persons in thirty-four states could have been negatively affected if the Court struck down the federal exchange subsidies. But there is a much wider universe of persons adversely affected by the law: the roughly 15 million persons in the individual and small group market who don’t get—and won’t get—the federal government’s health-insurance subsidies. Under Obamacare, millions of Americans are forced to pay more for their government standardized coverage, regardless of whether they like it or not, whether they want it or not, or whether or not it forces them to pay for medical procedures that violate their ethical, moral or religious convictions.

So, the debate will intensify over the primary issue: costs. In every state, the fundamental components of state health-care costs—the demographics, the underlying costs of care delivery and the competitiveness of the markets—are juiced up by expensive federal benefit mandates and individual and group insurance rules and regulations. These all drive costs skyward. As my Heritage colleagues have demonstrated, this regulatory regime forces young people to pay up to 44 percent more in premiums. Washington’s subsidies simply try to hide the true costs of the law; they don’t control them.

(Recommended: Obamacare - Nothing Short of a Disaster)

The law remains unworkable. The complicated insurance subsidy program itself has been a mess. H&R Block reported that about two thirds of subsidy recipients had to repay money back to the government because they got bigger than allowable subsidies. With the individual mandate, the administration has been granting lots of exemptions to insulate most of the uninsured from any penalty. That’s rather predictable; after all, even candidate Barack Obama argued that an individual mandate was unfair and unenforceable.

As for the employer mandate—another fractured cornerstone of Obamacare—the administration has delayed it for one year. Even liberal supporters now want to repeal it, fearing damage to the labor markets.

Meanwhile, other problems mount. The state exchanges are financially troubled. Coverage is still insecure, especially when loss of employment is tantamount to a loss of a health plan. Bureaucracy, red tape and paperwork plague the system, increasing costs and frustrating doctors and patients alike. All of those problems are getting worse, not better.

This is the second time in two years that President Obama has declared the debate over Obamacare to be “over.” Here’s a better prediction: America is entering into the next phase of an equally contentious but broadly educational debate over the direction of the nation’s health-care future.

In a free society, debate is over only when the people decide it’s over.