America's Old Foreign-Policy Consensus Is Back 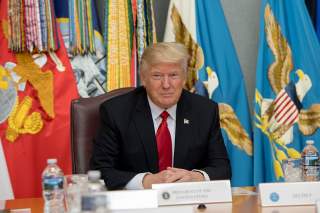 According to a popular view among political scientists and pundits is that policy changes and the political consensus that sustain are the outcome of a series of battles of ideas—“It’s the Zeitgeist, Stupid!”

This interpretation suggests that the center of the American political discourse has been shifting in a more right-wing direction since the so-called Reagan Revolution, changing the contours of political discourse, and mainstreaming free-market ideas that once were considered beyond the pale, leading eventually to policy changes.

As the political center shifted more to the conservative side, liberal policy prescriptions were branded as “socialist,” and even forcing the Democrats to move in that direction in the form of so-called Clintonism.

In fact, efforts to deregulate the economy and reduce taxes on businesses started under Democratic president Jimmy Carter in the 1980s, as pragmatic responses to the reality of a stagnant economy, due in large part to overregulated and tax-burdened businesses. The introduction of those new policies were responsible for shifting the political center to the right, not the other way around.

Similarly, the political center didn’t begin to turn to the left under President Barack Obama. His policy remedies that involved expanding role for government in the economy were not so much an attempt to extinguish the imaginary Reagan Revolution, but instead aimed at modifying some elements of the Carter-Reagan-Clinton evolution—which made some sense in the aftermath of the 2008 financial crisis and ensuing Great Recession.

Considering that some of the programs pursued by President Obama, like the auto-industry bailout, were initiated during the last year of his Republican predecessor, much of the economic debate during the 2016 election was centered on the question of whether or not what could be described as the Obama-Bush evolution had been successful. If you regarded these series of policies to be a failure, you probably helped elect Republican Donald Trump as president.

Indeed, most of the gradual changes that take place in American politics and economics—or, for that matter, in U.S. foreign policy—amount to practical responses to real policy problems, and do not necessarily mark the victory of a particular political philosophy. The American people aren’t into grand ideas, and tend to elect presidents who can fix problems and get things done, or, to apply political philosopher Isaiah Berlin’s typologies, they prefer “foxes” over “hedgehogs.”

It’s true that presidents tend to employ high-minded rhetoric as part of an effort to market their policies, and that intellectuals inside and outside their administrations frame policy debates and the ensuing policy changes they trigger as products of struggles between ideas. It’s as though these intellectuals operate in the transcendent realm of Platonic forms, where ideas rule. Hence Reaganism is “out”; Trumpism is “in.” In the material realm, policies that involve a lot of trade-offs and compromises do not resemble the picture-perfect blueprints in anyone’s mind.

As public choice theory would suggest, men and women of ideas have an interest in creating the impression that ideas really do make a difference. After all, who would hire them and pay for their services if that weren’t the case?

But at best, intellectuals help presidents to identify and implement a set of policies that they would have embraced in any case, in the way that, say, Henry Kissinger helped Richard Nixon construct the roads to détente and the opening to China, which the Republican president already had in mind when he entered office. He just needed someone to assist him in developing blueprints for action.

Hedgehogs would insist that, when it comes to American foreign policy, Reaganism marked a major conceptual transformation. The Cold War was now perceived as a Manichean struggle between good and evil that provided Americans with the drive to defeat the Soviet Union and Communism itself.

In reality, the decision to take action against the Soviet Union in Afghanistan and start raising defense spending transpired under President Carter, with these policies accelerating under President Ronald Reagan. It’s true that Reagan described the mujahideen guerrillas fighting the Soviet military in Afghanistan, as freedom fighters that shared the same values that inspired the Founding Fathers. But it is doubtful that that (false) claim made a big difference to the way the Cold War ended.

In fact, there was more continuity than change in U.S. foreign policy between the Carter and Reagan administrations. Much of the change had to do with the competence with which Reagan administration officials succeeded in advancing U.S. national interests and the strength of the American economy, versus what proved to be an economically bankrupt Soviet Union. That was why the United States won the Cold War, not because more Russians had access to the writings of Milton Friedman and Ayn Rand.

But since the end of the Cold War, it has seemed that the hedgehogs, whether liberal-internationalist or neoconservative, have drawn Washington’s foreign-policy narrative, keeping it stuck in the transcendental realm of ideas—which also happens to have been their industry’s main product.

A series of policies that accelerated the liberalization of global trade, investment, immigration and culture, and that helped advance the interests of members of the political and corporate elites, continued to be, in the mind of foreign-policy elites, part of a narrative of struggle between good and evil. It was based on the notion that the United States’ global status would be determined by its success in marketing its political and economic blueprints worldwide, taking such forms as the freedom agenda, regime change and nation building.

Now, many of the proponents of those failed ideas are charging that President Trump’s global policy agenda is being shaped by radical ideas, like nationalism and nativism. Trumpism is supposedly seeking to obliterate the liberal ideas that underpinned the post–World War II international order and the system that had evolved in the post–Cold War era.

But this critique isn’t only wrong and misleading. It is also self-serving. In fact, the ideas that were advanced in the years following the end of the Cold War, and brought together under the banner of “globalism,” attempted to change and even revolutionize the principles that underlined the post–World War II international order—by advocating the use American military power to shape and transform the political and economic systems of other nation-states; by embracing the axiom that liberalizing international trade takes priority over concrete U.S. economic interests; and by removing more and more restrictions on immigration into the United States, which saw itself less as a sovereign nation-state and more as a federation of ethnic, racial and cultural groups.

It was a case of John Lennon meeting Ayn Rand, of liberal and libertarian ideas merging:

Imagine there's no countries / It isn't hard to do / Nothing to kill or die for / And no religion too / Imagine all the people living life in peace / In a borderless and multicultural world / And in one and integrated global economy.

This set of ideas would have sounded fantastical, as well as destructive, to almost every American president during the first five decades following World War II, and their purveyors would have probably been regarded as members of a political fringe group. But these same ideas have gradually become celebrated as the new foreign-policy consensus in Washington, and helped to justify costly and devastating policies in terms of treasure and life for the United States and other nations.

And in November 2016, the message of those Americans who elected Trump as their new president was clear. They rejected the policies that were based on the new consensus embraced by Washington’s foreign-policy establishment, and that the new president pledged to challenge.

There is nothing radical about what President Trump has proposed. A fox who operates in the materialist realm, he clearly isn’t concerned about grand ideas. He has been promoting return to the old post–World War II consensus, under which the job of U.S. presidents was “not to represent the world” but “to represent the United States of America,” as President Trump put it during his recent address before Congress. The gradual policy changes he advocates amount to practical responses to real problems.

It is quite astounding that such basic notions that have guided most American presidents, such as the respect for the national sovereignty of the United States and other states, the need to protect core U.S. national interests as opposed to those of the “international community,” to maintain restrictions on immigration, and to pursue trade policies that don’t harm American economic interests, are being bashed these days in Washington as being beyond the pale and as constituting a threat to liberal American norms.

But this brutal criticism by the men and women who remain attached to their bankrupted ideas, and who have vested institutional and personal interests in maintaining the status quo, should not deter President Trump. At the end of the day, by promoting and successfully implementing his policies, he will also be transforming the foreign-policy zeitgeist.