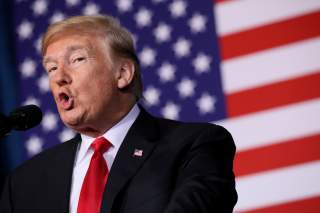 President Donald Trump has upset the elite Washington, DC establishment. This was most apparent following the surprise resignation of Secretary of Defense Jim Mattis. It was also apparent when he announce that he planned to reduce and remove the number of troops in Syria and Afghanistan.

Mattis is a great American; however, Jim Mattis’ entire worldview has been shaped by the bipartisan consensus that formed during the Cold War and reached sacrosanct status after the 1991 collapse of the Soviet Union. Unfortunately, this consensus is wrong and has led to nearly three full decades of failure.

The consensus pushes for simultaneous confrontation of great powers Russia and China. Rather than seeking a “Reverse Nixon” to China to counter the rising power of China; instead, the United States is putting pressure on both and pushing them into a marriage of geopolitical convenience. This forced marriage foreign-policy plan is also “America’s Ultimate Geopolitical Nightmare.” Recently, Graham Allison brought a graybeard sensibility by outlining the same possibility.

This is geopolitical malpractice. Yet, this is not all that the DC consensus has gotten wrong and that Trump has gotten right.

The consensus also argues that America should maintain what is effectively a permanent presence in Syria and Afghanistan. This is particularly problematic given that the United States has been in Afghanistan over four times as long as the time it took for it to defeat both Nazi Germany and Imperial Japan in World War II and with no end in sight according to policy elites.

Doing this all at the same time the United States confronts what could well metastasize into a massive debt crisis. According to the Congressional Budget Office, the Social Security and Medicare systems are projected to run a $100 trillion cash shortfall over the next thirty years.

Yet is the “establishment,” not Trump, which refuses to change direction while telling the American people that this is the only way to “be safe.” Now, rather than focusing on America’s greatest challenge—the rise of China—while dealing with unsustainable spending, U.S. policy elites are determined to mire America down in a morass of multiple distractions in peripheral theaters.

That is not what a large portion of the American public wants nor is it what that sector of society voted for when they elected Trump as president—or even Obama prior to Trump. Further, it is also a serious overstretch that violates the old adage of the great Prussian strategist, Frederick the Great, “He Who Defends Everything, Defends Nothing.”

The core problem is one of hubris born of a unique confluence of events in world history. America’s time as the unipolar superpower was ushered in upon the Soviet Union's collapse. Yet, rather than seeing this as a temporary phenomenon that would fade as other powers emerged from the end of the post World War II and Cold War eras, policymakers chose a hegemonic geopolitical strategy that has failed.

That strategy blindly facilitated China’s rise without obtaining the kind of domestic changes so long promised. At the same time, the elite have exacerbated inherent Russian fears of instability along its frontiers by pushing NATO to its borders and not taking it seriously as far back as the Kosovo air war conducted by NATO during the Clinton administration. The strategy also led to the shifting of the balance of power in the Middle East and creating the petri dish for an entire next-generation of terrorists.

These mistakes are compounded by the reality that the global order that shaped the bubble world of the elites was dead long before Trump ran for president. In particular, economic power is shifting from the Western world of Europe and the Americas back towards East Asia. This is a monumental shift that changes the direction of most global history since the discovery of the New World back in the 1400s. Still, U.S. policymakers blithely kept acting as if the rest of the world was just emerging from the ashes of World War II and America could bestride the globe as a colossus and face no adverse consequences.

Despite all of these errors and the current mood of domestic dissatisfaction, no other single nation, including China, has the base from which to produce success than the United States. However, the margin for error is not infinite and a course correction is needed in the very near term before the power imbalances complete their shift.

While Trump may not ultimately be the one to craft the comprehensive strategy for the future, but he is, at least, proving to be the necessary “bull in a china shop” that is destroying old and outdated ways of thinking. He should have an appropriately staffed administration in place that will not hinder his accomplishments.

Greg R. Lawson is a contributing analyst for Wikistrat.